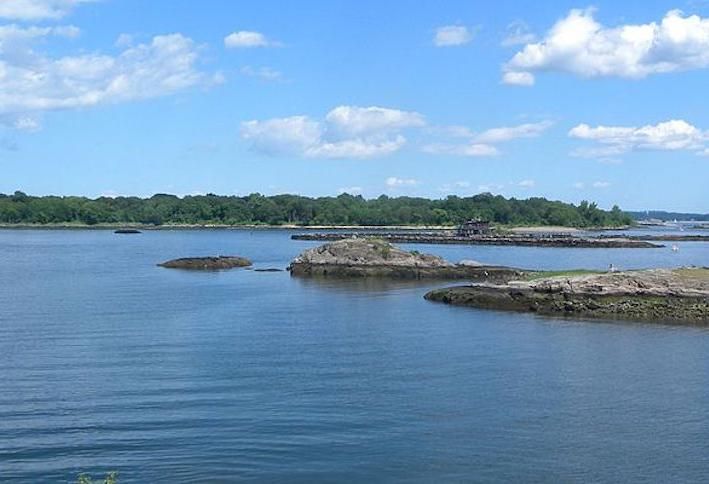 Courtesy: City of New Rochelle
Davids Island near New Rochelle, which the city is pitching as "Amazon Island" as part of its HQ2 bid

The City of New Rochelle, just north of New York City, is betting its fast-track planning process, a partnership with master developer RXR Realty and a 78-acre former U.S. Army base that Amazon can call its own will win the web giant's heart, along with its 50,000 new jobs.

The differentiator for New Rochelle over its big neighbor to the south, which is offering sites in Long Island City, the Far West Side of Manhattan and at the World Trade Center, is offering "Amazon Island."

The island, 3,000 feet off New Rochelle's shore, is now known as Davids Island, an unused, 78-acre space formerly home to U.S. Army base Fort Slocum. New Rochelle proposes to rename it Amazon Island and offer it as a recreation space for Amazon employees, as well as the rest of New Rochelle's workers and residents.

Davids Island is currently home to an endangered species of sea turtle and is a haven for rare species of egret and other water fowl. Fort Slocum closed in 1967, and many developers, including President Donald Trump, have eyed it for redevelopment projects. It is now home to "raccoons, tennis balls and broken dreams," according to a local newspaper columnist.

In late 2015, New Rochelle passed a new law giving development applications a fast-tracked zoning process and outlined a new downtown plan calling for 12M SF of commercial development in its downtown, along with 5,000 new residences. RXR is the master developer for the new downtown area, and is in construction on a 280-unit apartment tower and in the planning stages for a two-tower, 700-unit apartment project, all near the downtown core where Amazon would go.

“We can provide Amazon with access to the region without having to be within the boundaries of New York City and its associated high costs," New Rochelle Commissioner of Development Luiz Aragon said in a release. "New Rochelle’s dynamic urban core features a diverse and bustling business and residential community, complemented by an idyllic and sought-after suburban district.”

New Rochelle is within 20 miles of Manhattan and John F. Kennedy International Airport and 10 miles from LaGuardia Airport. The city is building the first 24 of 100 planned high-speed Verizon WiFi kiosks, its bid announcement states, and is bidding to be home of Westchester County's first bike-share program.

CORRECTION, OCT. 20, 3:45 P.M. ET: Luiz Aragon is New Rochelle's commissioner of development. A previous version of this story misstated his title. This story has been updated.