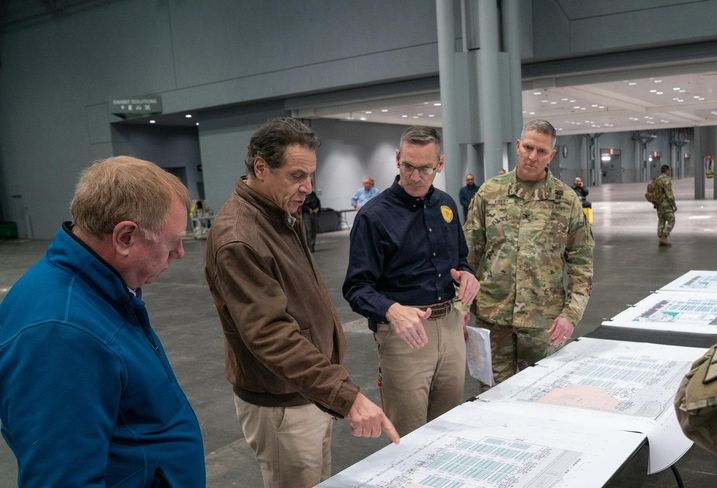 Event centers, college campuses and other spaces will begin to transform into field hospitals over the coming weeks with a goal of creating nearly three times the number of hospital beds in the state as the number of COVID-19 cases in New York rises to over 30,000.

Construction on transforming the Jacob K. Javits Convention Center into a field hospital — what will be the state’s largest so far — began Tuesday.

The main floor of the Javits Center will be constructed into four hospitals to be completed within the next week to 10 days, Gov. Andrew Cuomo said Tuesday while touring the site. Each hospital will house 250 beds, he said.

The Javits Center’s recent $1.5B expansion project has been a lucky investment during the time of the virus, Cuomo said.

“This was never an intended use but you do what you have to do, that’s the New York way, that’s the American way and we’re going to get this done,” he said.

On top of these four hospitals, there will be an additional 1,000 beds set up in the convention center, a spokesperson for the governor told Bisnow Wednesday. The Army Corps of Engineers, Federal Emergency Management Agency personnel and the New York Army National Guard will be constructing the project.

In addition, the Army Corps and FEMA will turn three other sites into makeshift 1,000-bed hospitals over the coming weeks, and the state is leasing a 600-bed nursing home in Brooklyn as part of the efforts.

The state will also be receiving an additional 1,000 beds from the U.S. Navy ship USNS Comfort, which is set to arrive in the next 14 days, U.S. Secretary of Defense Mark Esper said Wednesday.

Altogether, the state has planned for an additional 14,600 beds to be constructed in the upcoming weeks, the spokesperson said. Combined with the existing 53,000 hospital beds in the state, the surge still doesn't total the 140,000 beds Cuomo said the state will need as the coronavirus continues to spread.

“With tremendous effort, we will get from 200 to 300 completed,” Krulak told Bisnow. “Time is of the essence.”