We met with two multifamily developers last week who are in the second go-round of their real estate careers. One developer's current project is north of 100th Street and the other is stationed in SoHo, but both aim to use real estate to change their communities. 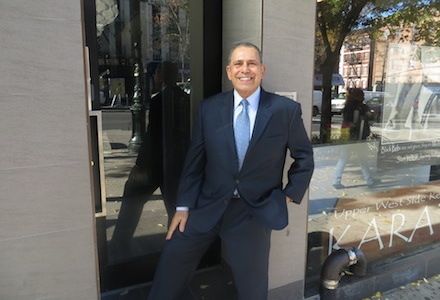 As Related Capital CEO from '79 to '99, Michael Fried oversaw the acquisition of more than 1,000 properties totaling 127,000 apartments, but his favorite work is what he's doing now: remaking neighborhoods. Three weeks after he retired from Related, he founded Phoenix Realty Group, which owns 3,800 units (600 affordable and the rest workforce) in the NYC metro and plenty more around the country. Last year, Phoenix bought a portfolio of 12 five-story apartment buildings (153 units) scattered on Columbus and Amsterdam between 105th and 107th streets. Now it's renovated 11 and is finishing up a facade redo on the 12th. Michael says these projects are breathing a nicer look and exciting way of life into the neighborhood, which encourages others to do similar rehabs. 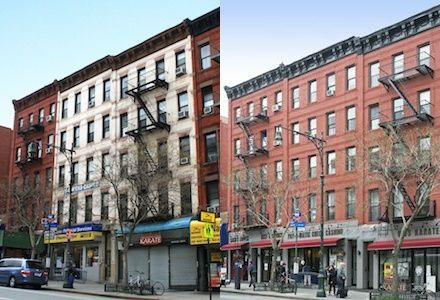 Above are the before-and-after pictures of three of the buildings (on Columbus between 105th and 106th). He tells us some of the units hadn't been touched for 50 years. Now, Phoenix has painted the exteriors and altered the ground-floor retail to have a consistent gray slate facade with red awnings. That's to achieve an upscale design in a middle-income neighborhood and achieve a bit of branding. Phoenix also painted the hallways and stairs, added modern light fixtures in the common areas, and in many cases redid units' floor plans. Average rents for renovated units have risen from $1,500 to $2,150 for smaller units and retail rents from $60/SF to $85/SF. 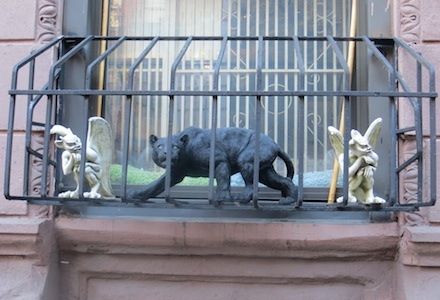 ADP has nothing on this security system, which we saw on the way back to the subway. Michael tells us the neighborhood has changed since Phoenix started its work. He triumphantly points out upgrades that would have looked out of place three years ago, such as a restaurant called The Ellington at 106th and Amsterdam that would look at home in Tribeca. It's been a lot of work over 18 months, Michael says, and the benefits are beginning to roll in. 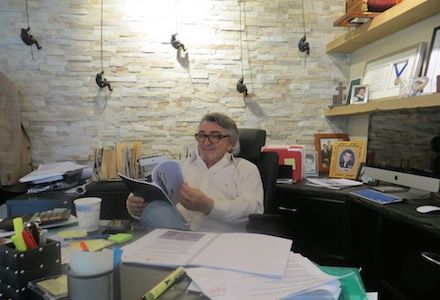 In his art gallery at 330 Spring St on Friday, Antonio Vendome told us he's getting back into the real estate game, looking for a site to build another Philip Johnson multifamily design. The two met when Antonio retained Philip to design the condo building at 330 Spring. Philip's original design for the site, Habitable Sculpture, was rejected by the community, and his Urban Glass House went up instead. But Habitable Sculpture has artistic chops, including a home in MoMa's permanent collection, Antonio says. 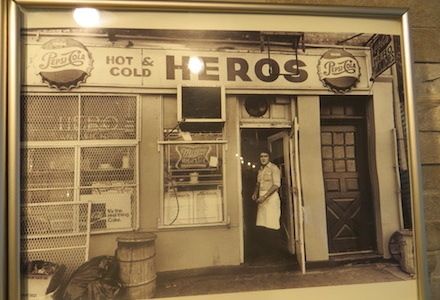 In his office, we snapped this old picture of Antonio at his family's sandwich shop between the legendary Ear Inn and what is now 330 Spring. His goal is to build Philip's design 10 times over--five in the US and five abroad--keeping the structure but altering the facade's materials and color to suit the neighborhood. The original design for SoHo's 330 Spring St was red and cream brick with double-hung windows, while the version meant for 66th and York (that acquisition from Witkoff and Lehman veered off course when Lehman crashed) was all glass. A potential version in Rome borrows from the colors of the Italian flag. And if zoning calls for it, Antonio says, the building can even become office or hotel. 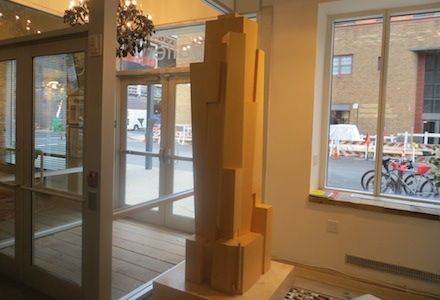 Antonio considers each of the 10 Habitable Sculptures to be an artistic series, and each unit a piece of art within that series. Before he died in '05, Philip even designed a plaque to be placed in each unit to celebrate its number in the series. Antonio says the real estate industry may think of him as a cowboy, and he's not yet taken seriously in the art world. But his goal is to make a name for himself with Studio Vendome gallery (a show by surrealist Rafal Olbinski opens Dec. 11) and another gallery at 30 Grand St and use that reputation to advance the Habitable Sculpture project. We snapped a model of the sculpture at 330 Spring.