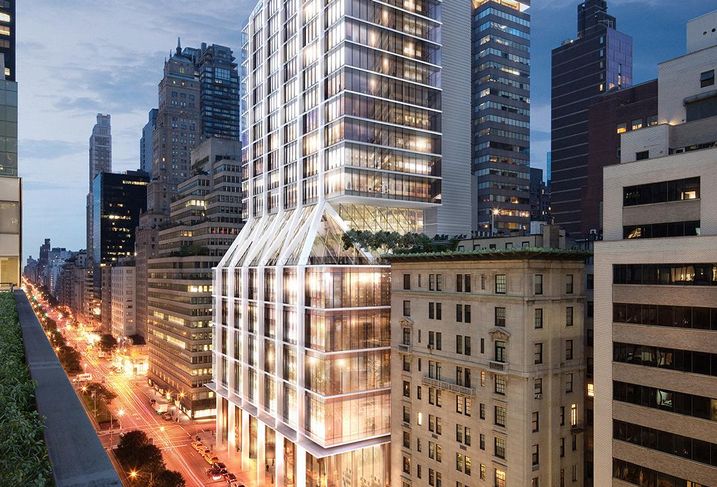 Safehold Inc., a REIT managed by iStar, is making good on its plan to aggressively grow its ground lease business, picking up the land underneath one of New York’s most anticipated office developments.

Safehold has reached a deal to pay around $620M for the ground lease at 425 Park Ave., the REIT announced. The company said it has a letter of intent with a sovereign wealth fund to from a joint venture for the transaction, in which Safehold would own 55% of the venture and act as its manager.

The deal to acquire the ground from Nuveen, the real estate arm of TIAA, is expected to close later this year, and is not conditional on the joint venture with the fund, whose identity Safehold did not disclose.

L&L Holding Co. is developing the Norman Foster-designed office building, and will hold onto the leasehold, The Real Deal reports. Hedge fund Citadel is planning to take more than 300K SF in the building, in one of the most expensive office leases in city history.

Safehold, which rebranded from Safety, Income and Growth earlier this year, is managed by iStar, which also has a controlling interest in the REIT. The manager announced plans to ramp up its ground lease business through Safehold earlier this year.

Over the past three years, it reduced its portfolio of land, offices, apartments and hotels from $3.5B to $1B, and is now in the process of selling nearly $500M of assets over the two years to finance growth in the ground lease sector.

Its first purchase was the land underneath two multifamily properties on Hollywood Boulevard in Los Angeles. Last year, it joined PRP Real Estate Investment Management to buy the land underneath 1111 Pennsylvania Ave. NW in Washington, D.C., providing $150M on the $338M purchase.

“The general perception of ground leases, historically, has been 'No thanks,' [but] we are going to change that perception to, 'Wow, my peers and competitors are using it ... I need to pay attention to this,'" iStar and Safehold CEO Jay Sugarman told Bisnow in an interview in February.