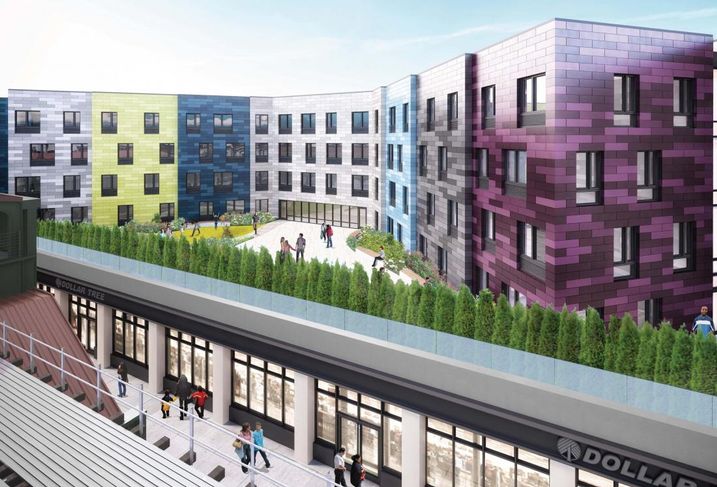 Courtesy: MacQuesten Development
A rendering of the plan for affordable housing at 1510 Broadway in Bedford-Stuyvesant

MacQuesten Development released plans for a transit-oriented, affordable housing development in the Ocean Hill-Brownsville neighborhood of Brooklyn on Monday.

1510 Broadway is a lot owned by New York City, one of six that were selected by Mayor Bill de Blasio in January to be developed into affordable housing. After being tabbed as 1510 Broadway's developer, MacQuesten announced its 97K SF project would contain 65 affordable rental apartments and 11K SF of ground-floor retail.

The lot sits next to the Halsey Street subway station, which is a stop for the J, M and Z lines. Amenities for residents will include a 7K SF courtyard on the second floor, a 1K SF lounge and kids playroom on the first floor, 39 parking spaces for residents and retail customers, and 45 bike parking spaces.

CORRECTION, AUG. 8, 12:30 P.M. ET: MacQuesten's project is in Ocean Hill-Brownsville, not Bedford-Stuyvesant, as the developer previously indicated. This story has been corrected.