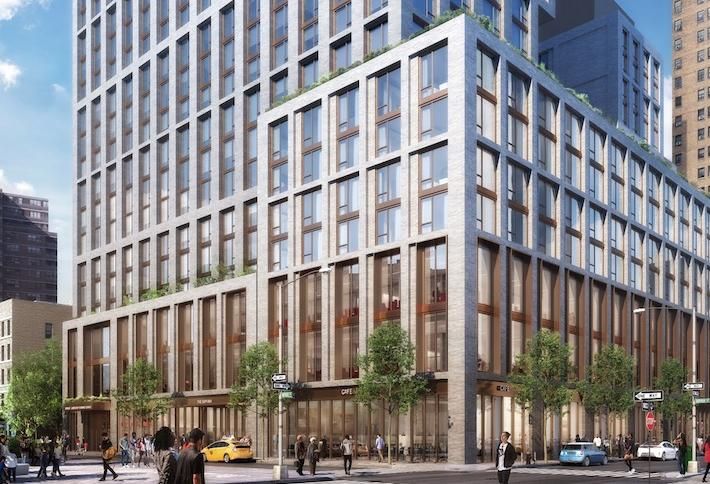 Gotham Organization and the Chinese-American Planning Council's plans to turn a Lower East Side synagogue destroyed in a fire into a mixed-use project is heading to the city's uniform land use review procedure.

The development surrounds what is left of the former Beth Hamedrash Hagadol Synagogue — which was built in 1850 and went up in flames in 2017 — and is expected to feature 488 rental units, as well as retail and community space, the Gotham Organization said in a statement Wednesday.

The developer and the community group are planning 488 rental units at 60 Norfolk St. The land use committee of Manhattan Community Board 3 approved the plans yesterday, Curbed reports.

There will be 208 permanently affordable apartments, with 115 residences set aside for seniors. Gotham is building 40K SF of offices within the two-building project to serve as CPC's headquarters.

The project would feature a 30-story tower on Suffolk Street and a 16-story building on Norfolk Street, and will incorporate what is left of the synagogue into one of the buildings. There will be a new congregation space and a cultural heritage center as part of the project.

“We are excited to be part of such an important project to the Lower East Side community and appreciate the robust feedback we’ve received from Community Board 3 and its constituents,” Gotham Executive Vice President of Development Bryan Kelly said in a statement. “With this plan, we expect to not only expand the affordability and diversify the housing options in the area, but also leverage our ongoing relationship with CPC to create a service-rich environment that benefits CPC, its members and the Lower East Side community at large.”

Gotham and CPC, the country’s largest Asian American social services organization, said they spent two years talking to the community about the development. The project's goal is to provide affordable senior housing amid an ongoing affordability crisis, which is badly needed in the area. The nearly 19K SF retail space will be for small-scale retailers, per the release.

“This is not a land grab by a developer in the Lower East Side,” CPC President Wayne Ho said at the Tuesday community board meeting, per Curbed. “We’ll be ground leasing to Gotham as our development partner and that rent will help us sustain and expand our social services in Community Board 3.”