More than 45 years after graduating from college, Ida O’Donoghue is back at school.

Once a week when Cal Lutheran University is in session, the 69-year-old former high school English as a Second Language teacher heads to the college’s Communication Café, where she helps foreign undergraduate students practice their English language skills.

The program is part of a unique partnership between Cal Lutheran and University Village, a senior residential living community across the street from the campus. 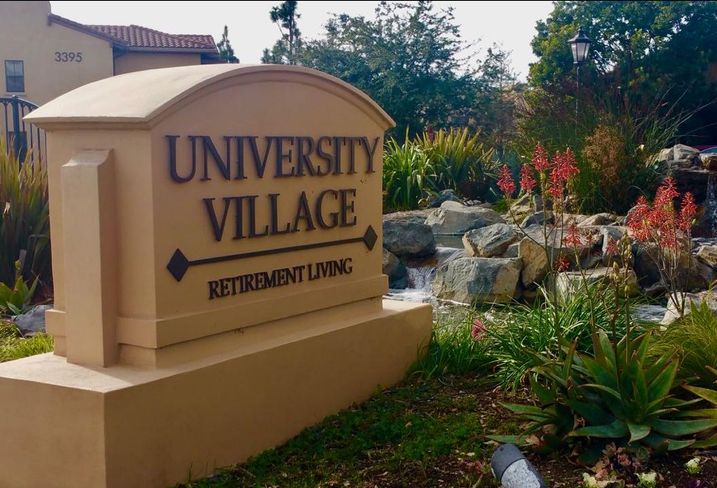 “It’s a marriage made in heaven,” said O’Donoghue, who has lived at University Village for the past 10 years. “It allows residents to share valuable skills with young people looking for guidance. It’s a win-win situation.”

University Village in Thousand Oaks, which is about an hour north of downtown Los Angeles, is one of more than 50 senior housing developments nationwide that is built within proximity of a college campus and partners with a university.

As the senior population continues to explode, real estate developers are looking for ways beyond the traditional model to house the massive baby boomer demographic, and University-Based Retirement Communities could be it. 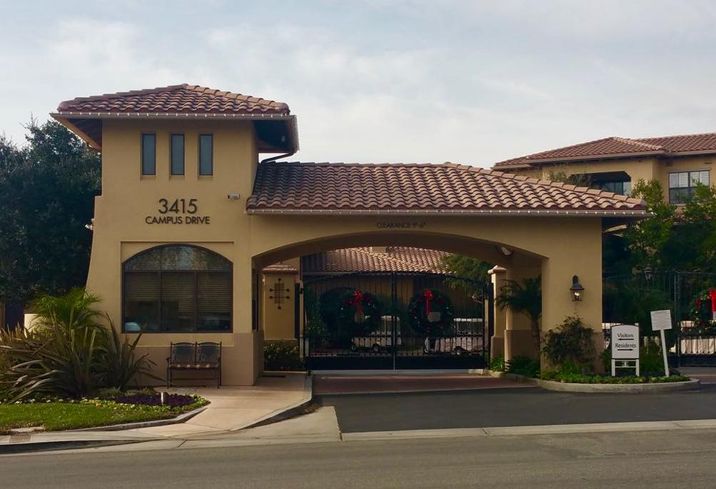 For the first time, the U.S. senior population ages 65 and older broke the 50 million mark in 2016. That number is expected to reach 70 million by 2030 and 83 million in 2050, according to U.S. census data and Seniorcare.com, a website about the senior community.

A study by the Joint Center For Housing Studies of Harvard University projects that by 2035, 2.5 million seniors annually will move out of their homes to possibly downsize or buy or rent another home.

“The days of wanting to live in segregated communities like the Sun Cities of the world are over,” Eisner Foundation CEO Trent Stamp said, referring to Sun City, Arizona, a 55-and-over-only senior community. “Studies have shown that seniors want to live with other generations. It gives them purpose in life."

The Eisner Foundation is a nonprofit that invests in intergenerational programs.

“The biggest determinant of a short life span is when folks isolate themselves and social isolation leads to poor health,” Stamp said. “When seniors live in communities with other generations, especially with young people, seniors stay engaged and lower their risk of health issues.”

Both Generations Have Much To Offer One Another 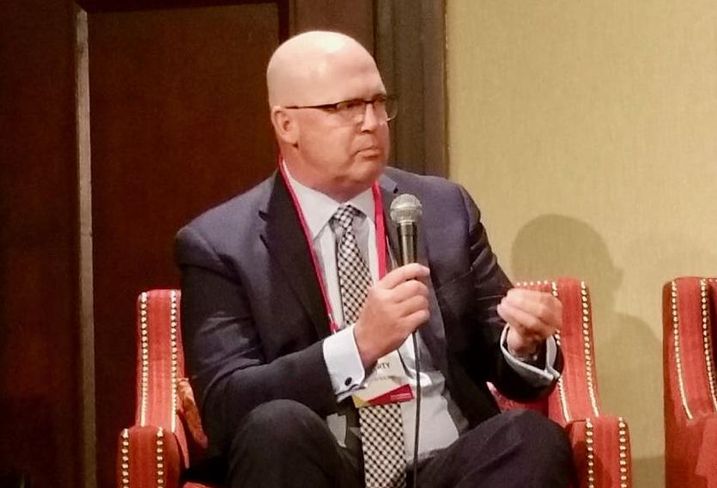 “We’re getting older, including me,” Moriarty said. “There’s a tremendous demand for senior and student housing. We have to start thinking differently to meet that demand.

“In the right situation, if you start to combine these two together, the students could take advantage of the knowledge seniors have, and the seniors could mentor these students and stay involved,” Moriarty said.

Moriarty said his concept would mix students with seniors together in the same building. There would be a central core or community areas that would include possibly a study hall, a resource center or a kitchen where both seniors and students would congregate, he said.

"This wouldn't be an 'Animal House' situation," said Moriarty, referring to the 1978 party movie.

He did not disclose the name of the community college since the project is still in the early stages.

Other universities nationwide offer some form of student and senior arrangement. New York University in 2016 launched a pilot program that allows students to live in a spare bedroom of a senior citizen’s home to lower the student’s rent in pricy New York. 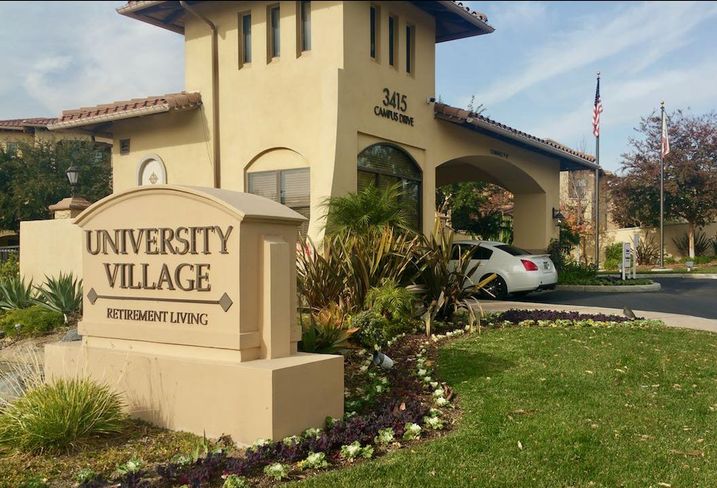 The UBRC model is seen as the ideal development. But as rosy as the senior housing and university partnership model may seem, there are several challenges in getting these developments up and running, Carle said.

He said for every successful development, there are plenty of failures. Land is expensive and the length of time to build one is costly and probably the biggest barrier.

Real estate developers and university officials do not always see eye to eye.

“There’s an assumption that you could do this and it will work,” Carle said. “Once you get into it, you’ll find they don’t all speak the same language.

“When you’re a real estate company and you have investors to answer to, you want to start building these with an 18- to 24-month turnaround, but that’s not how it works at universities,” he said. “It could take a university three to five years just to create a subcommittee and a task force to discuss the issue.”

Carle said for developers who want to build and move on to the next project, “you’re thinking, ‘I don’t have five years, I could have built two or three other developments within that time.’”

There are also liability and political issues. What will seniors be able to do on campus? How many interns would the college be allowed to place in the retirement community?

“The fact is the universities are the gatekeepers and they go by university time,” Carle said.

Not all colleges and universities are logical fits for one of these communities. He is in the process of creating a defined category list. He said not all senior communities next to universities would qualify as a UBRC — his top measuring stick.

His goal is to tag and define the communities and provide a voluntary certification for each so retirees looking to move into a UBRC or university-affiliated community would better know its offerings.

"It's very confusing," Carle said. "Some of these communities are 25 miles away from the campus. Some are across the street. It’s an evolving product that runs the gamut."

Carle said a UBRC benefits the developer and university.

“It’s a home run,” Carle said. “You will be the first choice in the market as long as that university exists.”

“There’s a lot of reasons why baby boomers want this,” he said. “This is a highly educated population and what they are looking for are active, intellectually stimulating and an intergenerational environment. They want lifelong learning.”

Universities want this, too, Carle said, because it gives some of their students an opportunity to learn outside the classroom and get hands-on working experience.

University Village in Thousand Oaks opened in 2007 on 65 acres once owned by Cal Lutheran.

The private retirement community sits across the street from the university and offers independent and assisted living and a nurse on-site. The community has more than 360 units from studios to two bedrooms ranging from $3K to $6K per month.

It is not affiliated with Cal Lutheran but the two have a strong partnership.

Some of the senior residents have been invited by professors to discuss their life experience with the class. The school’s Theater Arts Department recently collaborated with University Village to write and produce a dark comedy play.

“You attend our games and concerts and bring your applause and enthusiasm,” Wheatly said, according to a news release. “We’ve gained as much from you as hopefully you’ve received from us.”

About four years ago, he started a program called University Programming at University Village. He invites university professors to hold up to two-hour-long seminars for residents on topics such as the 500-year anniversary of the Protestant Reformation, the Big Bang theory or immigration.

When President Donald Trump addresses the country in his first State of the Union later this month, a Cal Lutheran Political Science professor will discuss the speech with residents.

“This is a good place to live,” Schneiderman said. “After a lifetime of teaching, you realize teaching is a lifetime of learning. For me, this experience is a continuation of something I’ve always done.”

O’Donoghue, the former ESL teacher, said she believes she and many of her neighbors are healthier and living longer lives because they are taking advantage of the amenities offered at University Village and Cal Lutheran.

One of her favorite parts of living there is working with the students.

“When you retire it’s always important to feel needed and relevant,” she said. “The quality of your life is to do for others. It’s absolutely reciprocal, we appreciate the students and the students appreciate us.”