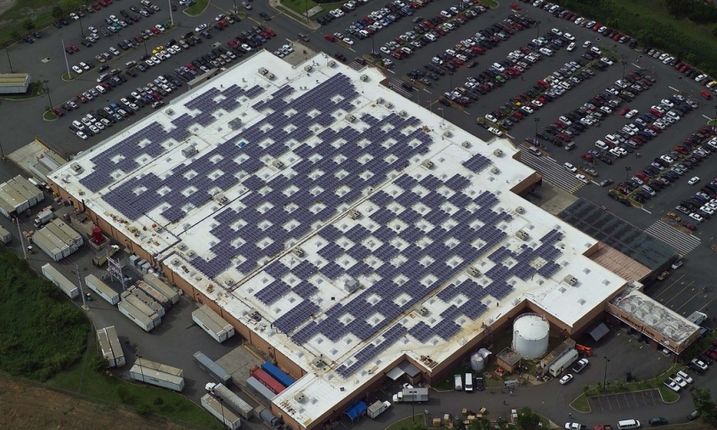 Flickr/Walmart
Solar panels on a Walmart roof in Puerto Rico

In its lawsuit, the retail giant alleges that Tesla was slapdash about the design, installation and maintenance of solar panels on the roofs of more than 240 Walmart stores, thus leading to the fires. CNBC first reported the suit.

According to Walmart, seven of its stores suffered fires due to Tesla's solar systems, including sites in California, Ohio and Maryland. Walmart had previously contracted with Tesla to install and maintain the systems, of which Tesla retained ownership.

In its suit, filed in New York federal court, Walmart is asking the court to declare Tesla in breach of contract, and order it to remove its solar panels from all Walmart stores. The retailer is also asking for damages in connection with the fires.

Tesla, whose SolarCity subsidiary had the contract with Walmart, hasn't publicly commented on the allegations.

There were no fatalities associated with the fires, and only one relatively minor injury, but Walmart reported considerable property damage to its stores. For example, the suit describes a large plume of black smoke emerging from flames on the roof of its Beavercreek, Ohio, store, and smoke invading the store, which prompted an evacuation of shoppers and employees.

In that case, the fire not only damaged the building, the suit says, but also substantial amounts of merchandise. The store had to be closed for eight days, the company said.

In Indio, California, another roof fire caused a Walmart evacuation and afterward a firefighter was treated for smoke inhalation. The suit alleges that fire resulted in millions of dollars' worth of losses.

Walmart demanded that Tesla disconnect all of the rooftop solar systems, which Tesla did. Even then, the suit alleges, the systems remained a fire hazard.

"Why were multiple Walmart stores located all over the country suddenly catching fire? At each location, the fire had originated in the Tesla solar panels," the suit says. "Tesla had engaged in widespread, systemic negligence and had failed to abide by prudent industry practices in installing, operating and maintaining its solar systems — conduct that greatly increased the risk of fire at Walmart sites."

The suit also alleges Tesla failed to ground its solar and electrical systems properly, and its solar panels at Walmart stores suffered from defects that were visible even to the naked eye, including loose and hanging wires. Walmart also claims Tesla has yet to provide Walmart with an analysis of the root cause of the fires.

"To state the obvious, properly designed, installed, inspected and maintained solar systems do not spontaneously combust, and the occurrence of multiple fires involving Tesla’s solar systems is but one unmistakable sign of negligence by Tesla," Walmart said in the suit.

Besides allegations of poor quality control, shoddy workmanship and a lack of professionalism, Walmart posited that Tesla's 2016 acquisition of SolarCity was a root cause of the fires.

Tesla bailed out a failing SolarCity when it paid $2.6B for the energy company. The suit alleges Tesla CEO Elon Musk had a conflict of interest as the largest shareholder of SolarCity at the time of the deal. Also, Peter and Lyndon Rive, first cousins of Musk, stood to gain handsomely from the acquisition.