Two Types Of Big-Box Stores Have Managed To Thrive Amid The E-Commerce Takeover. Here's Why. 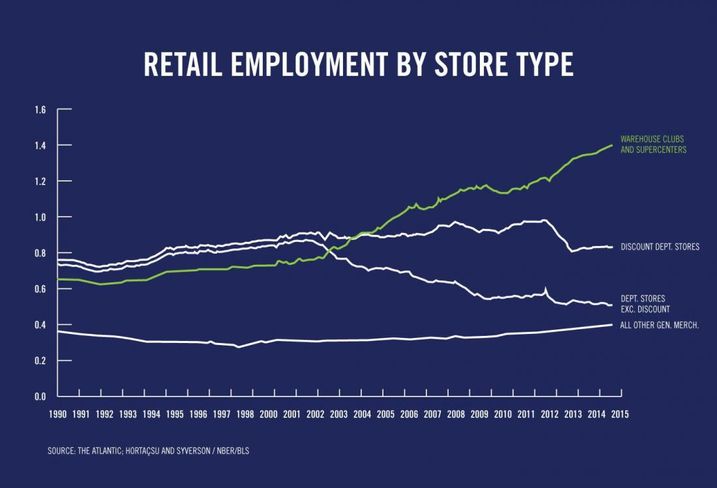 Amazon is taking larger and larger bites out of big-box retail's market share, and while the sector as a whole is bleeding, certain stores have managed to escape the ravages of e-commerce unscathed: supercenters and warehouse stores. And not just unscathed, but healthy and growing—see the lonely ascent of the green line. So why have consumers stuck with these big boxes and not others?

In an NBER working paper last year, University of Chicago economics professors Ali Hortaçsu and Chad Syverson examined changes in the US retail sector over the past two decades. Their findings discredit the conventional wisdom that e-commerce is killing brick-and-mortar retail across the board. Case in point: between 2000 and 2013, Costco’s sales grew by $50B, while Amazon added $38B.

“What we found is that a certain kind of big-box store, that is supercenters and warehouse stores, they've been doing great and they're still doing great. That's your Walmart supercenters, that's your Meijer, Costco, Sam's Club,” Syverson tells The Atlantic. “If you get to specific other stores that sell specific goods, like sporting goods, office equipment, then it's a mixed bag.”

A likely explanation for this difference is that supercenters and warehouse stores focus on items that today's consumers still want to inspect in person, such as cosmetics, drugs, and most of all, food and beverages. That may well change in the not-too-distant future, but for now shoppers remain slow to digitize their groceries. [TheAtlantic]