Turns Out, Walking To Work Is Also Healthy For A Retail Economy 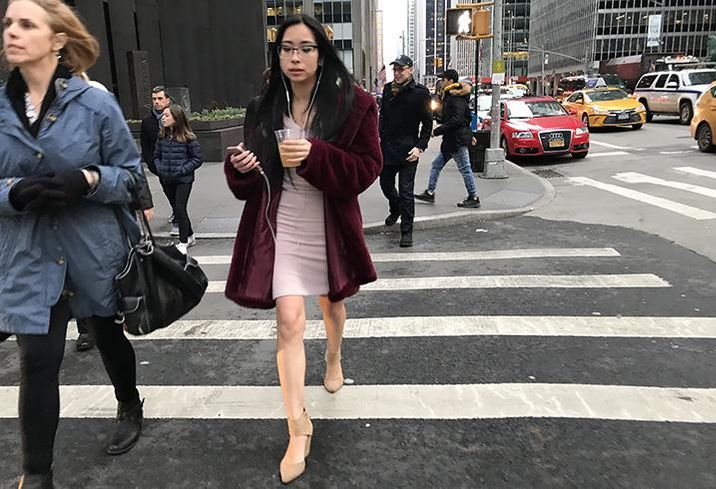 On the heels of National Walk to Work Day, it is clear that hoofing it to the office has multiple health benefits. But walkable urbanism can also be healthy for a local retail economy. Urban planning experts all over the country are busy designing the ultimate pedestrian experience, which can be so seamless that all a typical passer-by knows is the desire to wander into that nearby restaurant or shop.

Commercial properties in walkable urban locations pay off, with a higher value of 40% to 140% per SF over a drivable suburban product; additionally, rents are 20% to 100% higher, according to land-use strategist, professor, real estate developer and researcher Christopher Leinberger.

Retailers who know this are scrambling for a piece of the pedestrian experience. Especially during this real estate cycle, they are even leveling old strip malls just to create it.

One does not have to walk from home to participate as a pedestrian commuter. A walkable urban environment often includes multiple ways to arrive, including driving, biking, walking or light rail.

Upon arrival, the walkable area typically includes high density with a mix of uses. The area itself does not have to be large; about half a mile will suffice, Leinberger said.

A Walk Score measures walkability from an address to nearby amenities. A low Walk Score of 0 to 24 means driving is necessary to get from place to place. A high Walk Score score begins at 70, meaning most errands can be accomplished on foot, with the highest possible score being 100.

Every Walk Score point above 70 adds between $10 and $20 per SF to the value of a building, Leinberger said.

The most walkable large U.S. cities are New York, San Francisco and Boston. Parts of New York have a Walk Score of 100, for example. Dupont Circle’s score is 98. Uptown Charlotte is 95.

When it comes to encouraging walkable streets, Charlotte’s pedestrian program manager Scott Curry said it is important to get more than just one building or one street right.

“Retail developers play a crucial role in this,” Leinberger said. “Retail is sort of the glue that holds great, walkable urban places together. It’s what gets people on the street. More people on the street: more safety, more excitement, more people-watching. It’s just critical.” 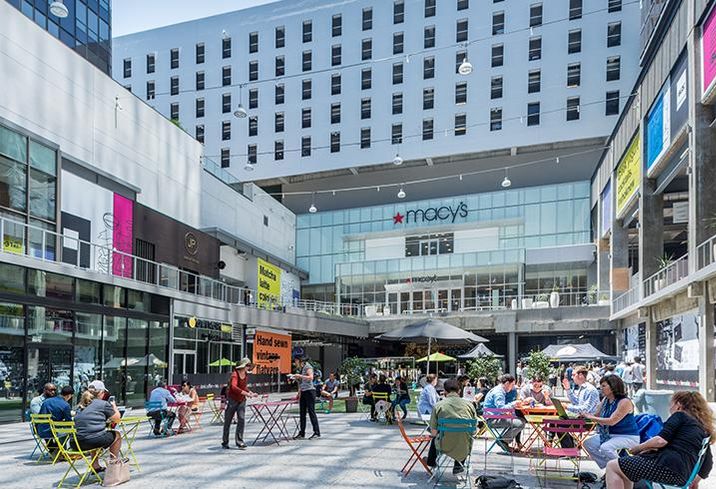 Courtesy of Studio One Eleven
The Bloc

Studio One Eleven has spent the past two years transforming The Bloc in downtown LA away from a 1974, dated mall experience.

“It was originally designed to shut the city out and create a safe haven from the city,” Studio One Eleven founding principal Alan Pullman said.

To create a pedestrian, urban experience at the redeveloped center, the roof was removed, the front facade was demolished and the entire center was opened up to the street.

A 200K SF anchor tenant, Macy’s, remained, as did LA Fitness and some of the smaller, independent stores. The property also hosts 800K SF of office as well as a 495-room Sheraton Grand Hotel. Tenant build-outs will continue for the next year and a half, Pullman said. A study showed most shoppers are accessing the center either through transit or walking.

“Retail is always a challenge, an emerging story in downtown Los Angeles. There’s going to be a lot of excitement about the retail that is going to occupy the space,” Pullman said. “We’ve made the facades much more accessible for pedestrian traffic. We are opening up the project back to the life of the city.”

Experiences planned and molded for the walking commuter 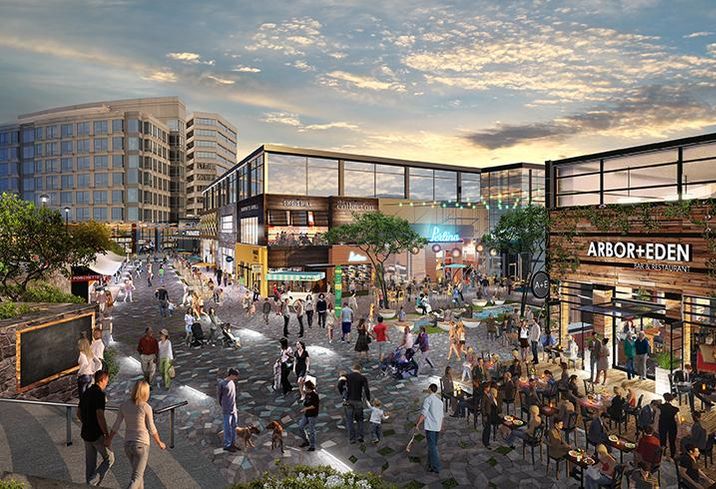 Courtesy of Streetsense
The Collection at Chevy Chase, Maryland, is being redesigned to be more walkable and have a stronger sense of place.

“Pedestrians not only generate direct sales, they create a magnetism that makes a place more inviting, which in turn yields more sales,” Streetsense Director of Real Estate Michael Smith said.

“Retail is the most engaging use for the ground floor of a building. That’s not to say it’s always the right use, but when there’s demand for it, there’s no better way to activate the ground plane. Retail and food and beverage bring people in ... at all times throughout the week. People crave — some even demand — authenticity, and walkable retail environments are the most authentic.”

The planning goes beyond store placement and into “overcoming threshold resistance,” a term coined by Al Taubman of Taubman Realty, who was one of the early pioneers of the regional mall and who died in 2015. Overcoming threshold resistance ideally begins with zero steps between a sidewalk and a store. A welcoming retail window is helpful, or a restaurant with diners seated near the window as to look crowded, popular and hip, Leinberger said. 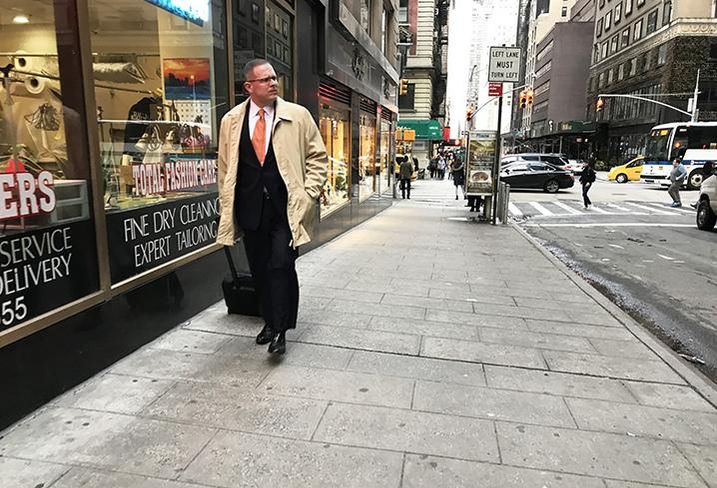 The first area that a shopper approaches inside a store is called the decompression zone, and urban retail expert Robert Gibbs said most stores mistakenly put too much merchandise in that space.

“Its purpose is to help the shopper get used to the environment they are entering. They are usually leaving a noisy outdoor street that is brightly lit, so they have to adjust to the new sounds and the new environment,” he said.

Gibbs said the first two steps, about 6 to 7 feet, should be plain with no merchandise. The decompression zone should end with a front and center table with merchandise that helps to define the store’s identity, and ideally about 20% of each day’s sales should come from those tables.

The three pillars to retail placemaking are placemaking, merchandising and the tenant, Smith said.

“If you don’t get all of these right, you’re missing the opportunity to maximize experience and economic productivity.”

Place-management organizations, often nonprofits connected to business improvement districts, are designed to focus on user experience. A concierge on the street will be connected to the police, but will also give directions to a museum or restaurant. Clean teams may power wash sidewalks more regularly than a city could. Economic development experts are designed to make sure the right retail mix is present. Festivals and farmers markets draw visitors to the area. Parking guides help direct people to parking spaces. Circulating systems, such as free buses, will help move people around.

“I refer to this as the fourth level of government in our society that’s evolving,” Leinberger said. “Federal, state, local and place. More and more of them are engaging in place management.”

“A lot of it is due to making this a great urban experience for the retail." 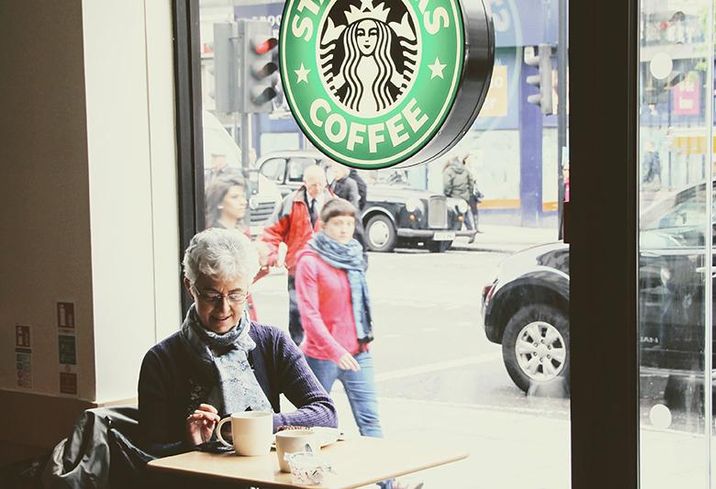 Many national chains are moving into urban neighborhoods, but not always without resistance. Examples of companies that have figured out how to best encourage foot traffic include Starbucks, Apple and Target, Leinberger said.

“Walmart does not get it. They’ve given up on urban stores. I have no doubt they’re going to have to come back and try it again; they just failed the first time.”

Multistory configuration works best for big-box chains, as they do not need to be at ground level to get shoppers’ attention, he said. That leaves ground-floor retail activity for smaller, local businesses, often that have been curated by urban planners.

Some cities do not want national chains downtown, and Gibbs said that is a mistake on the cities’ parts.

“A lot of national chains are getting the cold shoulder from cities, but the demand is there.”

About a quarter of the nation’s malls will close in the next five years, Gibbs said.

“The millennials and empty nesters and retirees prefer the experience of shopping in cities. They find the malls boring and too time-consuming," he said.

“We’re on the edge of a new wave of urban shopping.”