Starbucks To Reinvent Some Locations Post-Pandemic, About 400 Others To Close

Starbucks Corp. has rolled out plans to emphasize drive-thru and curbside operations at its U.S. portfolio.

At the same time, the company said it will de-emphasize its cafe model by adding about 300 locations that offer no sit down option at all, which it calls Starbucks Pickup. 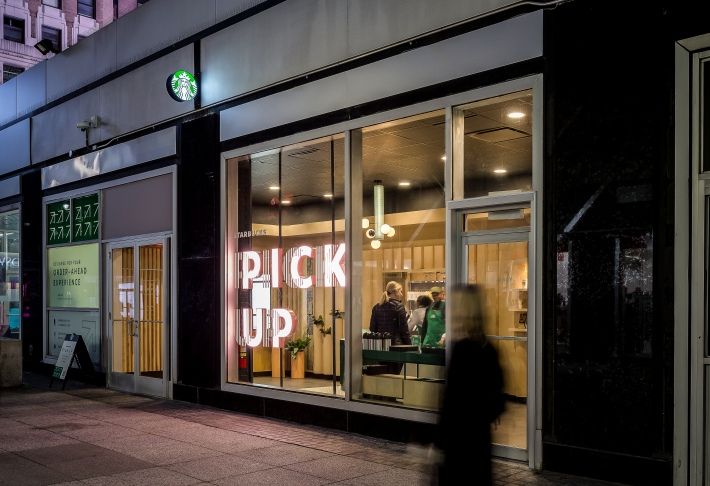 There will be new Starbucks Pickup stores mostly in dense markets, including New York City, Chicago, Seattle and San Francisco, and convenience-oriented enhancements such as curbside, drive-thru and walk-up windows to suburban locations, the company said.

The new store rollout, which actually represents an acceleration of plans already in place, comes as the coffee giant also plans to close locations in the U.S. and Canada.

"This repositioning will include the closure of up to 400 company-operated stores over the next 18 months in conjunction with the opening, over time, of a greater number of new, repositioned stores in different locations and with innovative store formats," the company wrote in a filing with the Securities and Exchange Commission on Wednesday, adding that the coronavirus pandemic spurred the acceleration.

"While we had originally planned to execute this strategy over a three- to five-year timeframe, rapidly evolving customer preferences hasten the need for this concept," the filing said.

The company also said it plans to retrofit existing cafés to accommodate more drive-thru and carryout options. Existing layouts will be revised to include separate counters for mobile orders at high-volume units.

“One thing to know, even before COVID set into place, our business was roughly over 80% grab-and-go,” Starbucks Chief Operating Officer Roz Brewer told Fast Company.

Before the pandemic, Starbucks tested its Pickup store in a few busy markets, including one at Penn Plaza in Manhattan and one in Commerce Court in Toronto. A third location will open soon at 42nd and Park near Grand Central Terminal in Manhattan.

Roughly one-third of Starbucks' 15,000 stores in the U.S. now have a drive-thru component. About two-thirds of new locations will, and some older locations will be retrofitted to include the feature.

Curbside pickup will also expand, allowing a customer to place an order without leaving his or her car, using an app. The app will direct the customer to a parking spot near the Starbucks, and workers will bring out the order.

During Starbucks’ fiscal second quarter, which ended March 29, the company opened about 200 new stores in the Americas, with plans for a total of 300 new stores in fiscal 2020. That is down from the company's original plan to open 600 new stores for the year, an indication of how the pandemic's impact, TechCrunch reports.

Ahead of its fiscal third-quarter report, Starbuck has said that it expects to register a loss for the quarter of 64 cents to 79 cents per share, with revenue down by as much as $3.2B. It expects same-store sales in the U.S. and China to be down 10% to 20% year-over-year for the quarter. Its fiscal Q3 will end June 28.

U.S. same-store sales were down 43% in May compared with a year ago. By the end of the month, over 90% of the Seattle-based company's U.S. locations had reopened, CNBC reports.