Retail bankruptcies have spiked to levels that have surpassed even those in the Great Recession. But this time, a host of reasons — and not pure macroeconomic forces — are to blame, including Amazon.com's growing share of online sales. 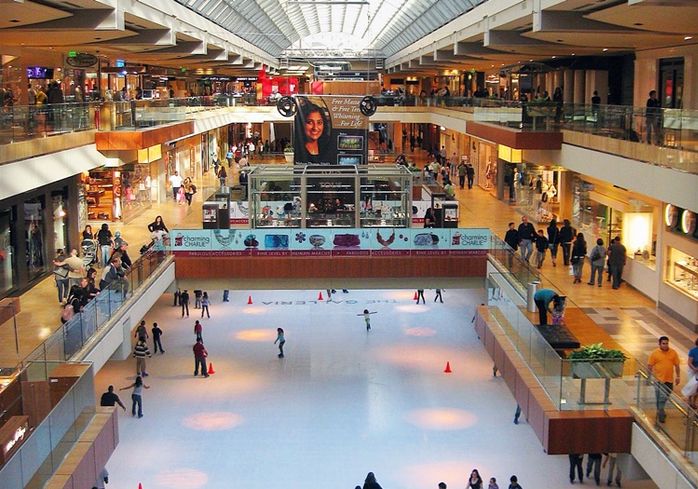 Postoak/Wikipedia
The Galleria in Houston

While 2017 is still young, more retailers have filed for bankruptcy than even during the height of the 2009 recession, according to Hedgeye, a stock analyst firm.

Names that have succumbed to the shifting tide of the retail marketplace thus far include Gander Mountain, RadioShack, BCBG Max Azria, The Limited Stores and HHGregg, to name a handful. And the rest of 2017 promises to be harsh on even more struggling retailers as Amazon and other online forces start to create a paradigm shift in the retail landscape, Hedgeye analyst Jeremy McLean said. 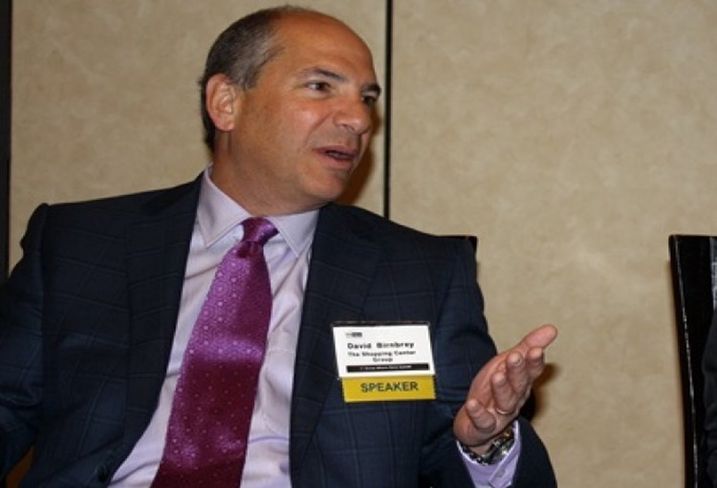 “There's no question that there is a lot of stress on products catering to the middle class, especially as it relates to apparel,” The Shopping Center Group CEO David Birnbrey said. “What you're seeing is Millennials are spending more money on experiences and food than merchandise. But that creates a loser and a winner.”

Birnbrey said the spike in bankruptcies is clear evidence of the adjusting tastes in how consumers shop. Retailers are trying to respond with further online presences, and even product-makers, such as Garmin and Microsoft, are following Apple's lead and opening brick-and-mortar stores.

The environment has become Darwinian, he said. Those that adapt will survive. Those that do not will join the ranks of RadioShack and Wet Seal; footnotes in the annals of retail history.

“If you're selling something I can buy any number of places, you're Amazon bait,” said Ken Morris, a principal at retail consulting firm Boston Retail Partners. "That's just the reality."

Certainly, online shopping habits are hurting many retailers. But it is not the only trend that has helped to push a record number of retailers into bankruptcy this year, with even more on the cusp, McLean said.

For two decades, the U.S. was in a deflationary environment in which goods were cheaper to produce and cheaper to sell to consumers. That was buffered by record low interest rates, allowing many retailers to expand store counts quickly. But many retailers were selling in categories where margins were extremely thin; categories like sporting goods or discount clothing.

Now, the deflationary spiral has bottomed. That has put pressures on margins for some retailers, even those that may have had positive cash flow.

The cost of operations has suddenly jumped up, “and that's how you go bankrupt,” McLean said. “If you see further inflation, you'll absolutely see an acceleration” in retail bankruptcies.

This time, consumers have not been reticent to spend their dollars. This past February alone, average consumer spending was the highest it had been since 2008, according to Gallup. And the rate appears to be increasing still.

For Thornberg, that means Amazon is taking a bigger bite out of the brick-and-mortar sector than ever before. It is a shakeout long in the making, he said.

“It's like when they invented the lightbulb. All those candlestick makers went out of business,” Thornberg said. “Ultimately, people shop online because they find it a better option.” 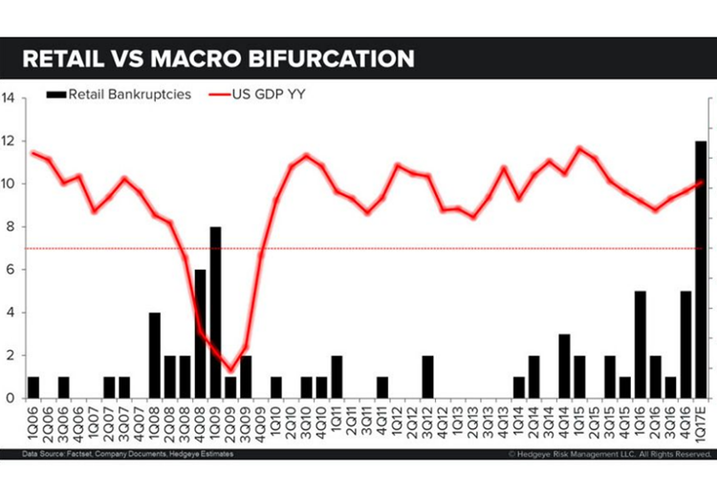 While many are quick to point out online retailing only accounts for some 9% of all retail sales, McLean said that masks a greater truth. When you strip out gas, food services, autos and auto parts, Amazon now commands 25% of the incremental growth of U.S. retail sales as people's buying habits increasingly go online, especially Millennials, who make up a disproportionate number of online consumers.

“Not only do they shop differently, they are becoming a larger portion of the spending over time,” McLean said. "And they're nowhere near the peak." 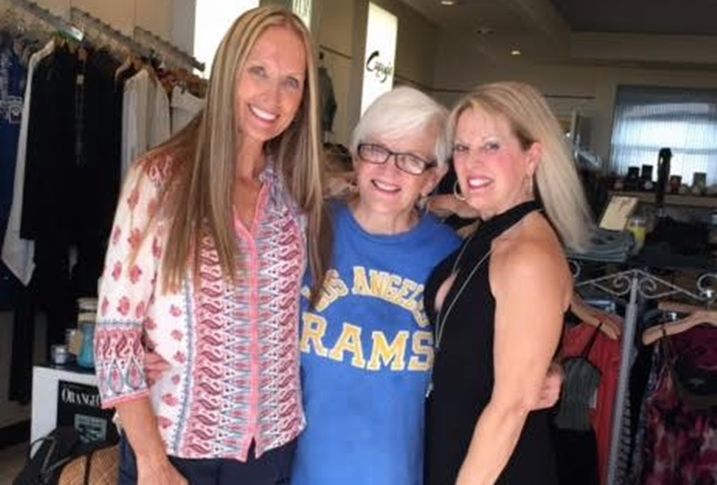 The opinion that Amazon is to blame is not universal in the retail trenches.

Heidi Miller owns two boutique women's clothing stores in California; one in Carlsbad and the other in Laguna Beach. She is a small retail veteran, having owned her business, Tight Assets, for 28 years. At one time, she owned as many as five stores. While the internet has taken business from her stores, it is not solely to blame.

"The economy is still bad. We haven't come out of it yet,” Miller said. Miller said she always expects consumers to pull back on spending during election years. And this one, in her mind, was particularly divisive. But she said it is more than just political angst.

Many of her customers have been laid off from executive jobs in the past. They are employed again, but not near the level or incomes of their previous jobs. So when Miller's longtime customers come into the stores, they do not have the money to buy.

“Baby Boomers are getting boomed out,” she said. "I've seen a lot of that going on." 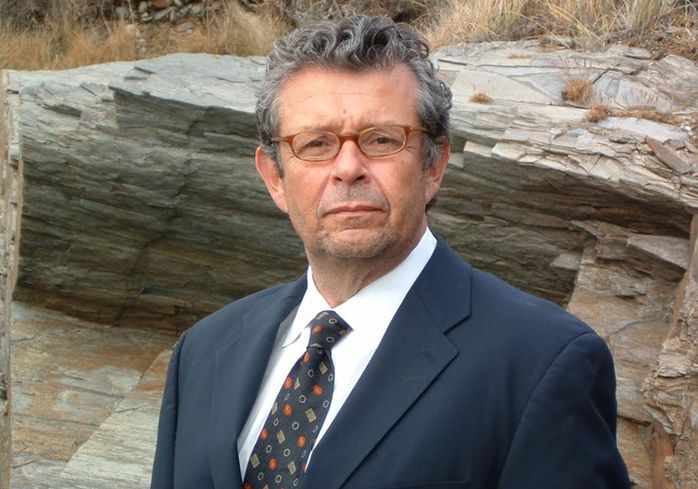 Boston Retail Partners' Morris said the fallout of retailers can be tracked to how they market to customers. If a store is advertising with inserts in newspapers, then it is probably in real trouble.

“They're aiming at my mother and not my kids,” Morris said. "And the reality is you're spending an enormous amount of money in the wrong place at the wrong time. You don't see Apple doing inserts."

Morris said the best brick-and-mortar retailers are relying on experiences for customers and innovative ways to shop. He said many of his firm's retail clients are adopting real time retail strategies.

For instance: A shopper walks into a store, and the retailer can instantly read his or her past purchases and shopping habits, and then ping the shopper's smartphone with the best deals catering to his or her tastes right there while in the store.

“They'll know you'll like to buy at a discount, and they'll offer you that discount. No haggling,” he said. “It's sort of the Amazon experience at the store level.”

For Miller, with just two stores, having an online retail presence or strategy fails to achieve anything for her. Instead, Miller said she focuses on providing what Amazon cannot match — extreme customer service.

“I'm in the customer service business first, then the clothing business,” she said.

CORRECTION, MARCH 22, 2:45 P.M. ET: Amazon commands 25% of incremental retail sales growth year-over-year, once gas, food services, automotive and auto parts sales are stripped out, according to data compiled by Hedgeye. A previous version of this story erroneously stated Amazon controls 25% of U.S. retail sales. The lede also has been changed to reflect that Amazon.com is not the only source of retail bankruptcies so far this year.