The most popular fried chicken fast-food chain in the U.S. is hitting turbulence as it tries to land at several American airports. 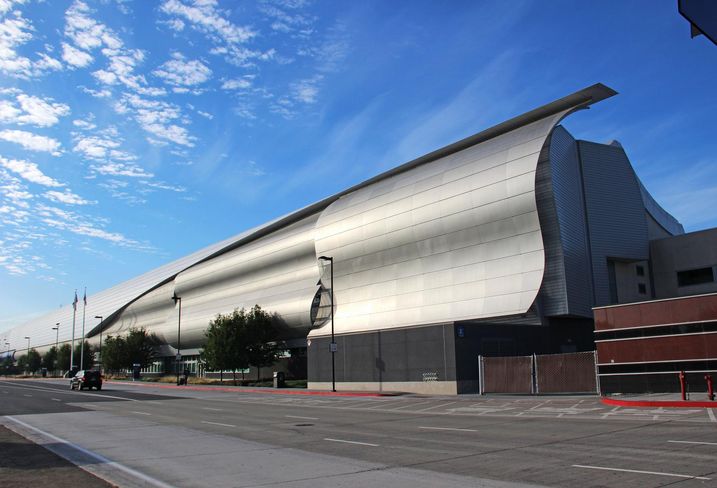 Chick-fil-A is on track to become the third-largest U.S. fast-food chain, but three U.S. airports are severing their ties with Chick-fil-A, two before the first waffle fry could be served. After San Antonio airport officials sent a new concessions contract to the City Council for final approval, city leaders approved the contract in late March on the condition that a licensed Chick-fil-A was removed and replaced with a new tenant.

The company’s CEO, Dan Cathy, told the Baptist Press in 2012 he was “guilty as charged” in his stance against marriage equality. He has since clarified his support of the “biblical definition of marriage” was not an “anti-this or anti-that” statement and that he has reached out to members of the gay community. But his original words, as well as concerns the chain is still donating to organizations not supportive of the LGBT community, were a turnoff to San Antonio City Council members.

“San Antonio is a city full of compassion, and we do not have room in our public facilities for a business with a legacy of anti-LGBTQ behavior,” San Antonio Councilman Robert Treviño said following the March 21 vote. “Everyone has a place here, and everyone should feel welcome when they walk through our airport."

Treviño wasn’t the only one bothered by Chick-fil-A being the first thing visitors saw when visiting their respective city.

Delaware North, the concession handler for Buffalo Niagara International Airport, also decided in late March not to include Chick-fil-A in a planned food court upgrade at New York’s third-largest airport. When the chicken chain was announced for the airport’s new concessions area, New York Assemblyman Sean Ryan (D-Buffalo) argued a publicly financed facility like Buffalo Niagara International was not the appropriate venue for Chick-fil-A.

San Jose, California, which recently approved a Chick-fil-A as part of its new concessions contract at Norman Y. Mineta San Jose International Airport, made the pre-emptive decision to announce it would not renew the chain when its lease comes up for renewal in 2026. In the meantime, San Jose politicians have called for making their airport branch of the chain “the gayest Chick-fil-A” until its lease expires by surrounding it with the rainbow flag, a symbol for the LGBT community.

Chick-fil-A has maintained it is simply in the business of chicken these days and not interested in politics.

“Recent coverage about Chick-fil-A continues to drive an inaccurate narrative about our brand,” the company said in a statement to Bisnow. “We want to make it clear that our sole focus is on providing delicious food and welcoming everyone — not being a part of a national political conversation. We do not have a political or social agenda. More than 145,000 people from different backgrounds and beliefs represent the Chick-fil-A brand. We embrace all people, regardless of religion, race, gender, ethnicity, sexual orientation or gender identity.” 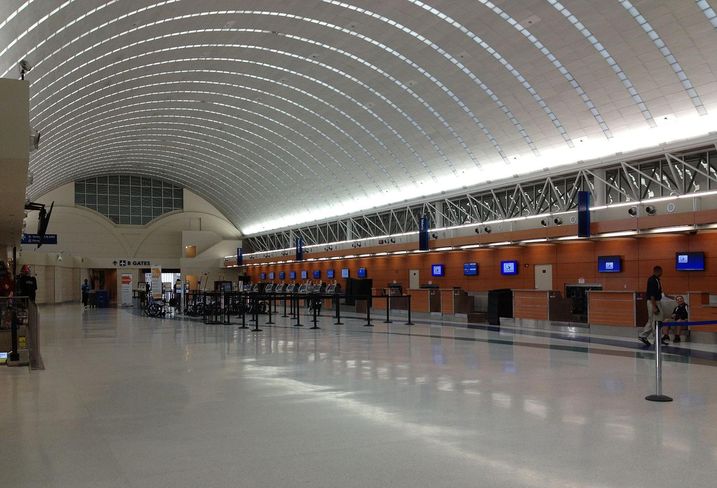 Wikimedia Commons/TEXUSAF
A decision to pull the plug on a planned Chick-fil-A at San Antonio International Airport, pictured, sparked two other airport lease struggles for the chain.

Representatives with Chick-fil-A were not made available for an interview for this story, but the company previously told Bisnow “the onus is on us to earn our way into any market.”

It has also indicated each store reflects the community it serves, which led an Orlando, Florida, location to break the company's long-standing closed-on-Sunday rule in 2016 to serve those assisting in the aftermath of the mass shooting at Pulse, a gay nightclub in the Florida city. It kept its location in Atlanta's Mercedes-Benz Stadium closed during the Super Bowl.

Not everyone is buying Chick-fil-A’s defense.

“That’s Chick-fil-A trying to have it both ways,” said David Thompson, a spokesperson for Ryan, the New York assemblyman. “The company still donates to these organizations with anti-LGBT stances, but it wants to take credit for a private franchisee doing something good  for the community.”

While former Santa Clara County Supervisor Ken Yeager, who opposed the San Jose airport Chick-fil-A and is part of the group wanting to surround it with rainbow flags, thinks it would be great for the chain to do more outreach to the local LGBT community, he still isn’t sold on the company’s attempt to change its political image.

“If they go out of their way to recruit gay employees and support gay organizations here, that would be great, but that wouldn’t take away the overall worry the profits they make are going to anti-gay causes,” he said.

Chick-fil-A has issued a response to claims it was still donating to anti-LGBT charities. In 2017, the company gave about $1.6M to the Fellowship of Christian Athletes, which Chick-fil-A says funds camps and programs for inner-city youth. FCA has a sexual purity statement, which speaks out against sex outside of marriage and “homosexual acts.”

The company was also criticized for donations to the Salvation Army, which has been accused of discrimination against the LGBT community in the past (claims the organization has denied), and a fundraiser for the Vidalia, Georgia-based Paul Anderson Youth Home, a Christian residential home accused of speaking out against same-sex relationships.

Chick-fil-A said its $150K donation to the Salvation Army resulted in 11,000 children in need in Atlanta receiving gifts during the season and maintains its donations in general are meant to support a diverse array of youth and educational programs nationwide. However, it admits it has stopped donating to the Paul Anderson Youth Home “after a blog post surfaced that does not meet Chick-fil-A’s commitment to creating a welcoming environment to all.”

Maneuvering Out Of A Chicken Contract 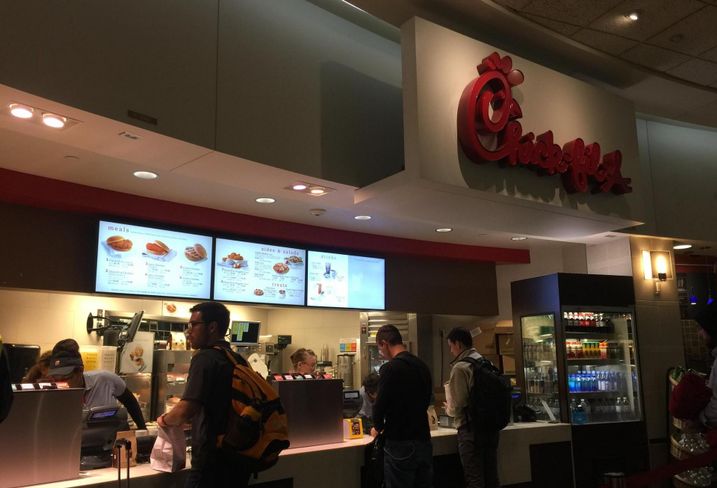 Opposing Chick-fil-A is one thing, but getting out of a concession contract isn’t easy, especially since it can be protected on the grounds of religious liberty and free speech.

Texas Attorney General Ken Patton is investigating San Antonio for potential First Amendment violations. Both San Antonio and San Jose officials realized this would be an issue and stressed leaders should publicly oppose the chain for potential lost revenue due to being closed on Sundays and not based on its religious or political beliefs.

“Obviously, we knew we couldn’t pull the contract,” Yeager said. “Because of legal reasons, the issue became about Chick-fil-A being closed on Sundays and not bringing in revenue rather than a free speech or religious issue.”

The closed-on-Sunday strategy was also applied in San Antonio, but Rich Stinson, a spokesperson for the airport, said the city could have a hard time finding a brand that could bring in the kind of revenue needed to satisfy the approved airport concession contract.

Paradies Lagardère won the contract for the Texas airport’s concessions and, as of Tuesday, had yet to find an acceptable substitute for the chicken chain. The way the City Council approved the contract on the grounds Chick-fil-A will not be included means Paradies must find a restaurant to replace the chain but still meet its same revenue guarantee.

With the chain’s San Antonio International Airport future looking dim, Stinson said the agency has received quite a bit of feedback.

“The onslaught of responses we received via phone, email and otherwise is in the thousands,” he said. “A lot are very overly hot in terms of people wanting to defend Christian values and beliefs, but you’d never believe that in the tone of the language they’re using in their notes.”

The Chicken Is Down But Not Out 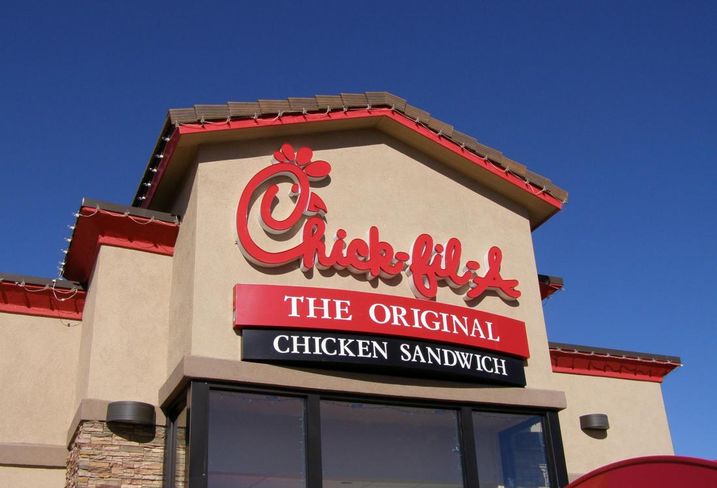 Chick-fil-A is facing headwinds in San Antonio, Buffalo and San Jose, but it is business as usual at the 32 airport Chick-fil-A venues across the U.S. Bisnow reached out to.

All were either pleased with their ongoing business relationship with Chick-fil-A or showed no sign of attempting to follow in the path of the airports in San Antonio, Buffalo or San Jose.

“DFW currently has three Chick-fil-A locations in three terminals,” Dallas-Fort Worth International Airport spokesperson Kori Stolar wrote in an email. “They remain busy and continue to serve our customers.”

“We firmly believe all people should be treated fairly, and we prohibit unlawful discrimination, including on the basis of sexual orientation,” Metropolitan Airports Commission spokesperson Patrick Hogan said via email. “Our contracts include provisions obligating concession operators to follow state and federal nondiscrimination laws and requirements. We investigate all claims of unlawful discrimination within our jurisdiction. We’re not aware of any behavior by Chick-fil-A or any other concessions companies operating at MSP that conflict with legal requirements.”

The resurgence of the chain's political past shouldn’t deter the chain, according to Atlanta-based The Shumacher Group President and Managing Broker Harold Shumacher, who got pushback when representing tenants like Hooter's. But the challenge for Chick-fil-A is overcoming politicians' tendencies to listen to the loudest voice in the room.

“They might be impacted or influenced by the noisy minority rather than the majority,” Shumacher said. “At [the] end of the day, I think 98% of the population could care less because they like the product.”

Chick-fil-A isn’t going to let the political pressure in the three cities ground its airport ambition elsewhere in the U.S. Chick-fil-A Vice President of Corporate Communications Carrie Kurlander said the recent decisions didn’t give the company any reservations going forward about trying to open locations at publicly funded venues.

“We are focused on serving great food with remarkable service and are always seeking ways to meet customers where they are,” she said.