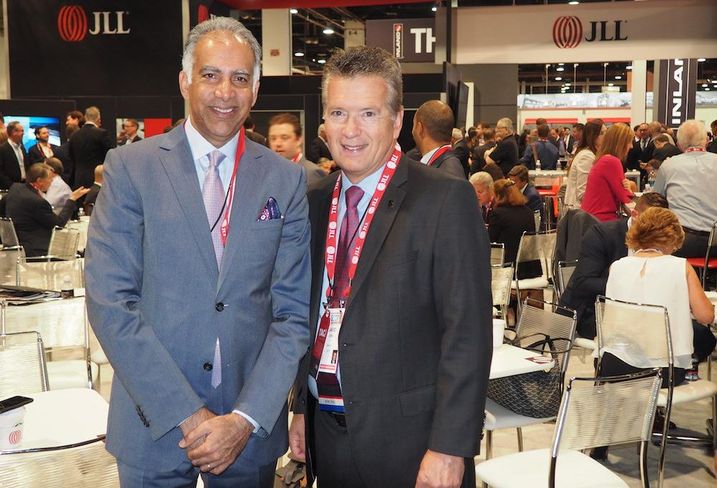 One would expect a dark cloud to be looming over Las Vegas this week, as more than 36,000 attendees descend on the desert city for the annual ICSC RECon retail convention.

Sports Authority went bankrupt. Large retailers are hemorrhaging money. The global economy is stalling. There's a lot to be worried about. But Naveen Jaggi, JLL's president of retail brokerage in the Americas, says the headlines don't reflect what's happening on the ground.

"Talk to anybody here, and they've never been busier," Naveen, snapped next to JLL global retail chairman David Zoba, told Bisnow from JLL's expansive booth at RECon. "You don't hear about how busy the food and beverage side is, how well local retailers are doing."

To prove his point, Naveen mentioned how Five Guys is planning on opening 100 new stores this year. It's just one (delicious) example of a retail success story.

But Five Guys will never replace a Macy's footprint in a mall or shopping center. Nothing will.

Naveen directs all of JLL's leasing efforts nationally, and he's noticed a trend of international retailers making their American entrances much more deliberately. Uniqlo's decision to pull back its expansion has made many of them skittish. But he expects Superdry, a European fashion retailer, to expand significantly in the states over the next year. That just means 10 to 15 stores, not 50 anymore.

Where are the international retailers looking for expansion? DC, Los Angeles and Boston top the non-New York list, he says. LA in particular is attractive because it lacks a center of gravity, lending itself to more stores in the market than cities like DC with centralized pedestrian areas.

Domestically, San Antonio is a "hot market" because of the military's presence, giving retailers confidence in its long-term stability.