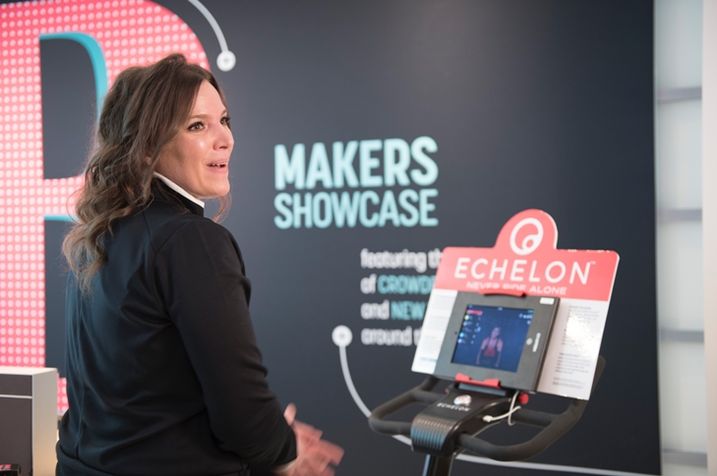 Brookstone Makers Showcase is a hands-on, demo-friendly store, according to the company. One of its goals is to compete with online retailers by providing in-person experience with new products. The thinking is that such experience benefits not only the buyers, but the sellers.

“There’s no substitute for being able to see a product live and try it out in person,” said Kristina Caron, national sales manager for the Echelon Connect smart fitness bike. “Brookstone Makers Showcase connects makers and customers in ways that just can’t be achieved through selling online.”

"One of the advantages of selling in a brick-and-mortar store is that we get to meet customers in person and see their emotional responses when they interact with our product,” SmartHalo Smart Biking System co-founder Xavier Peich said. “Seeing customers’ firsthand reactions at Brookstone lets me know what’s working."

RetailNext provides store analytics at the location, which tracks customer traffic patterns and their time in the store, among other metrics.

"Comprehensive shopper data allows both Brookstone and its makers’ brands the ability to measure shopper engagement, and use those metrics to take improvement actions on everything from merchandising to product development,” RetailNext CEO Alexei Agratchev said.

Brookstone plans to expand the new brand in the United States and China, though the company did not specify how many new locations will open how soon.

Much of the company's recent growth has been in China. Since Sanpower Group Co. acquired Brookstone four years ago, the gadget purveyor has opened in about 500 retail locations throughout that country, and expanded both its global product development and distribution capabilities.