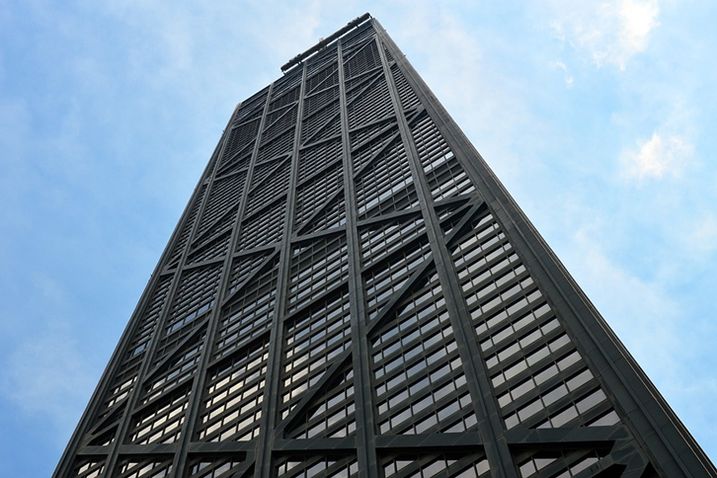 In the wee hours of Friday, an elevator malfunction at Chicago's former John Hancock Center, now known as 875 North Michigan Ave., sent a car with six occupants plunging from the 95th to the 11th floor. One of the car's hoist ropes had apparently broken.

Modern safety features such as multiple hoist ropes and speed brakes kept the car from plummeting all the way to the ground and killing or severely injuring the passengers. Even so, they ended up stranded at the 11th floor — where there was no exit — for most of the night.

The occupants had been at the restaurant on the building's 95th floor before boarding the elevator. The car they were riding in accelerated more than usual and then came to a stop, though not abruptly enough to injure them.

Because the shaft had no intermediate stops, the Chicago Fire Department first had to look for the elevator, the Chicago Tribune reports. Then the rescuers cut a hole in the wall to reach the trapped occupants.

"It was a precarious situation where we had the cable break on top of the elevator (and) we couldn't do an elevator-to-elevator rescue, we had to breach a wall," Chicago Battalion Fire Chief Patrick Maloney told the Tribune.

As yet, it is not clear why the hoist rope failed so dramatically. The elevator passed its annual safety inspection by the city of Chicago earlier this year.

This summer, 875 North Michigan Avenue owner Hearn struck a deal to sell the office portion of the tower to Sterling Bay. The building's condos, as well as the restaurant and observation deck, are separately owned.

In the U.S., there are an estimated 900,000 elevators, each serving an average of 20,000 people per year, according to Consumer Watch. U.S. elevators make 18 billion passenger trips per year.

The Otis Elevator Co. machines alone carry the equivalent of the world's population in their elevators every five days, Gizmodo reports.

Considering how often they are used, relatively few people die in elevator accidents. Incidents involving elevators and escalators kill about 30 and seriously injure about 17,000 people each year in the United States, according to data provided by the U.S. Bureau of Labor Statistics and the Consumer Product Safety Commission.

Elevators cause almost 90% of those deaths and 60% of serious injuries by elevators and escalators. However, merely riding elevators is a fairly low-risk business, since accidents involving workers on or near elevators — including those installing, repairing and maintaining elevators, and working in or near elevator shafts — account for almost half of the annual deaths.

Half of worker deaths in or near elevator shafts were due to falls. Other incidents include workers caught in or between moving parts of elevators or escalators, being in or on elevators or platforms that collapse, or being struck by elevators or counterweights.

Elevator mishaps may be rare for ordinary passengers, but they can receive a lot of attention when they occur, such as the hapless passenger who was trapped in a New York elevator for nearly two days, or a far more gruesome case in which a man was decapitated by an elevator in Houston.