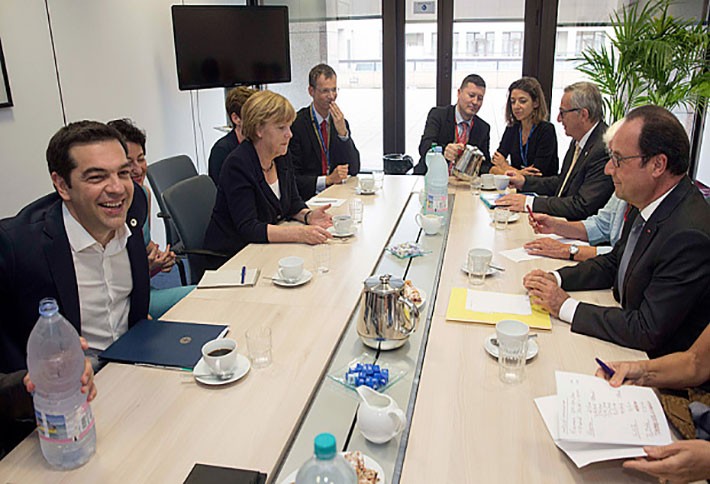 Greek Prime Minister Alexis Tsipras is somehow smiling through a frazzled delegation summit in Athens, according to journalists present at the chaotic event. And the overarching sense of confusion and unpreparedness—the Greeks showed up sans fresh proposals to avoid a so-called Grexit—has led to President Obama's intervention via phone call.

The whirlwind meeting currently unfolding is a fitting extension of a weekend and Monday morning hangover during which Greek voters overwhelmingly rejected new austerity measures as part of a continued bailout and the country's tempestuous rock star finance minister Yanis Varoufakis resigned from office. Athens has extended its bank "holiday" and a 60 euro cap on ATM cash withdrawals.  The subway system continues to be free.

More recently, the Greek contingent at today's eurogroup meeting showed up empty-handed, instantly torpedoing one of the summit's two central goals: deliver a fresh set of proposals to creditors for their review. That aim was important enough to spin off the second: avoid the messy discussion between creditors about restructuring Greece's debt in order to leave room for that proposal review. In other words: nothing much got accomplished today by the eurogroup.

No wonder, then, that European Central Bank board member Ilmars Rimsevics of Latvia conceded that the zone might become "stronger" after Greece's increasingly likely departure. Echoing that sentiment, the finance ministers of Finland and, more importantly, Germany, have all but nixed the possibility of (another) debt restructuring. The French and Italian ministers appeared more conciliatory and open to that option.

Obama, who of course has been less enmeshed in and vocal about the crisis than his European counterparts, spoke separately to Tsipras and German Chancellor Angela Merkel, urging them to come to terms and avoid a Grexit. The president reportedly said that a compromise involving Greek reforms and its creditors' continued financing was the only way to achieve that goal. Elsewhere on the domestic front, newspaper editorial boards including the New York Times' have pushed for the refinancing conversation the Athens crowd seemed so keen on avoiding.

In the past hour or two, Tsipras "scurried" through the summit press room and would only say it was a "complicated" situation, but progress was being made.  And in lieu of those written reforms, Athens has sent an application for a European Stability Mechanism (ESM). And because Greek dramas have never been known for their brevity, that (and who knows how many other) conversations will likely be continued on Sunday.