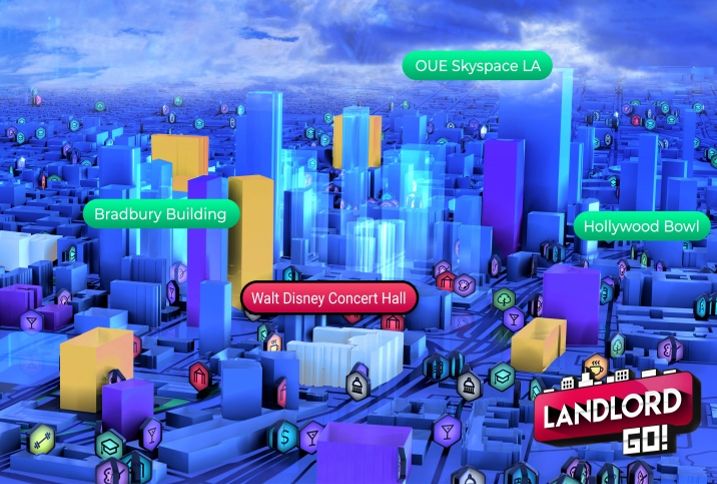 The game has elements of Monopoly, as it involves competitive buying and selling of non-physical real estate, as well as collecting rent, but also is patterned on Pokemon Go and other AR games.

"The inspiration was simple," Reality CEO John Woznowski told Bisnow by email. "Everybody knows the concept of the Monopoly board game, and we thought it is time to take that to the next level, thanks to technology of today: GPS in every smartphone, huge amounts of big data that can be used."

Landlord Go players can obtain shares in virtual versions of real properties in various cities, including in London, Washington, D.C., and Los Angeles. The value of these virtual properties is determined using actual data about the real-world buildings, which changes in real time, according to Reality.

The information that helps determine the valuation of virtual properties includes, somewhat like an actual building, its location relative to a city center and neighborhood amenities. Valuations also depend on the location of other players. Whenever another player makes a real-life visit to a property, they "pay rent" to the owners (in the context of the game). The more visitors a property gets, the higher its value.

Reality uses a proprietary AI and data platform called Big Dots, which adds real-world data to desktop and mobile apps. Landlord Go thus allows players to "invest" in properties they can see and experience themselves, including famous landmarks, such as the Empire State Building or Walt Disney Concert Hall, or other neighborhood buildings that are only locally known.

"We know exactly how many people are currently playing Landlord Go from a few sources," Woznowski said. "Google has introduced a tool called Firebase, where developers can monitor cohorts of users, though not of active devices from specific locations."

Also, he said, Reality has its own system that tells the company the current location of the players anonymously, and there are also tools like Appannie, which aggregates mobile games data.

The company didn't specify exactly how it plans to monetize the game, though it has stated that players do not need to spend real-world money to play. AR/VR games employ a variety of money-making strategies, however, including in-game advertising and premium content.