The day Cushman & Wakefield executive vice chairman Tara Stacom found out that One World Trade Center—the building her leasing team represents—was going to surpass Sears Tower as the tallest building in the Western Hemisphere, she called her father, Matt. 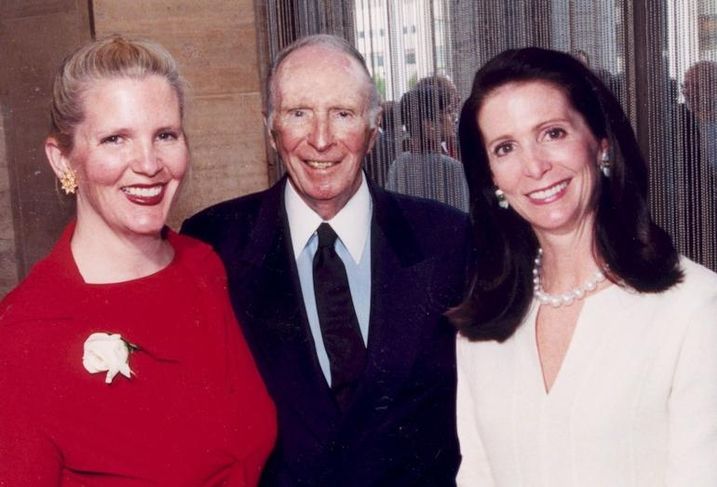 “He was involved in the development and leasing of Sears Tower, and I remember flying out with him to Chicago as a child to visit the building,” she recalls. (Tara, right, joins Matt and sister Darcy.)

“To tell the truth, up to this time, there had been a little bit of friendly, intra-family rivalry along the lines of ‘whose building was taller.’ But instead of showing any hint of dismay over being surpassed, he memorably replied, 'I’m so glad we kept it in the family.'” It's one of Tara’s greatest memories of her father.

The Stacoms’ legacy will be honored next week, when the Real Estate Board of New York (REBNY)—the city's preeminent industry trade organization—presents its prestigious Bernard H. Mendik Lifetime Leadership in Real Estate Award to the late Matt and daughters Tara and Darcy, a vice chairman at CBRE. This is the first time the honor has ever been bestowed upon a family.

They’re certainly a well-known fixture of the New York City commercial real estate market. Matt began working at Cushman & Wakefield in 1946, after returning from World World II, and worked for the firm in some capacity until 2012, about two years before he would pass away at the age of 95 in January 2014. He had been a top-ranking broker there for decades and held a seat on the company’s board, among numerous other roles and duties. 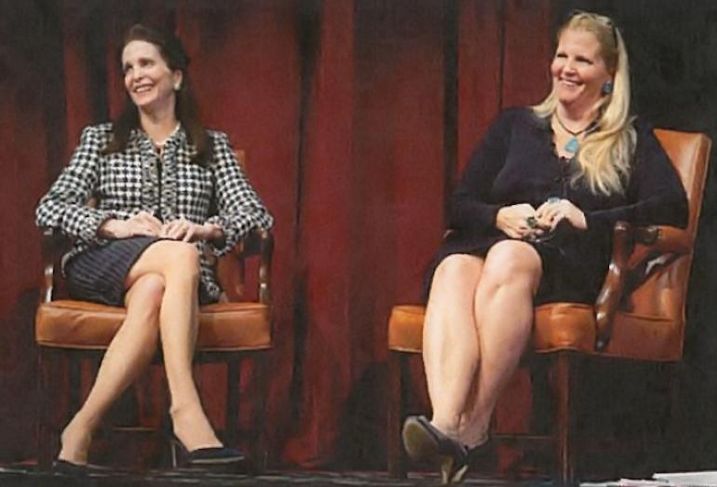 Darcy, a marketing major, and Tara, a finance major, graduated a year apart from Lehigh University, then began their careers in the early ‘80s under Matt’s tutelage at Cushman & Wakefield. (Above, they're pictured at the university's Stacom Family ire@l Speaker Series.) Both started in leasing, but Darcy soon discovered that her talent was in the investment sales side and left for CBRE in 2002. Tara continues to represent tenants nationally and globally, as well as many of New York City’s top owners.

Although both women were exposed to the industry at an early age, Tara actually wanted to be in broadcasting. The recession of the early ‘80s brought a perfect opportunity to follow her dream when she secured a position with a division of HBO.

But the job there was short-lived, and Tara was laid off as the recession lingered. “So I had to go back home to live,” she recalls. “My father immediately said, ‘You can’t live here rent-free, so you have to come work for me.’ And that’s how I joined Cushman & Wakefield in 1981 and grew to love my job.”

When the women started out in real estate, nepotism was frowned upon. “It was very hard for us, especially being a part of our father’s firm,” Tara explains. "It just wasn’t done in the 1980s. But today, it’s the norm. Most of the industry’s major firms make no bones about hiring ‘second-generation’ brokers and it becomes mostly an advantage for these kids.” 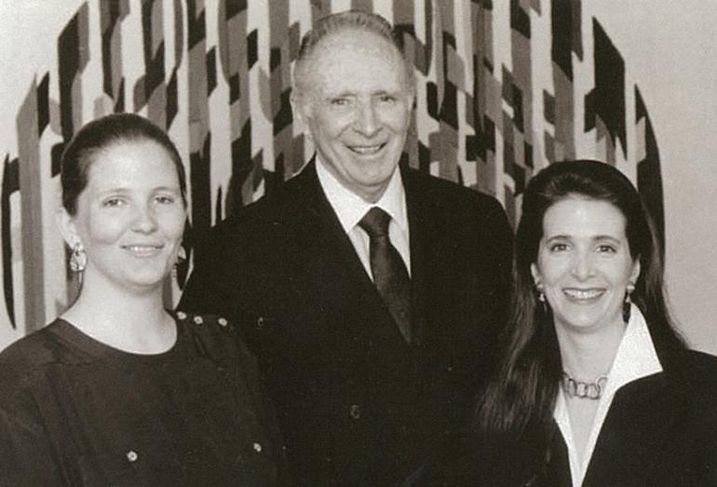 Matt was especially tough on his daughters as he taught them how to succeed in the competitive industry. But they took his lessons to heart.

“He would grill me as we prepared for meetings with clients, whether we were negotiating or pitching,” Tara recalls. “He’d walk in and say, ‘I’m going to ask you six questions,’ then took away our presentations. His lesson: think of the hardest questions we’d ever have to answer. If you can manage those, you can manage all questions. It’s those tough questions that differentiate you from the pack.”

Working under their father wasn’t always easy. In 2006, Darcy told The New York Times that when she was at Cushman & Wakefield, “No matter what success I have [here], I’ll always be Matt Stacom’s daughter.”

However, both daughters have carved quite a name for themselves and are consistently ranked among the top executives in their respective firm.

Nine years ago, both women were honored during the Realty Foundation of New York's annual luncheon. “Darcy mentioned in her speech that Dad’s shoes were big ones and very hard to fill,” Tara recalls. “I took the right shoe, and she took the left shoe. That legacy is very hard to surpass.” 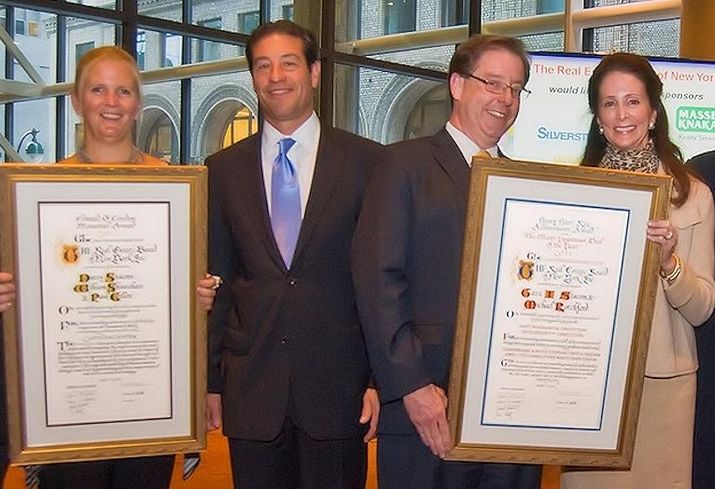 Above, the sisters are pictured at REBNY's annual Deal of the Year awards in 2012. Darcy and colleague Bill Shanahan won the Edward S. Gordon Award for the sale of Long Island City's Two Gotham Center; Tara and Michael Rotchford (who recently left C&W to start his own investment fund) won the Henry Hart Rice Award for their leasing work at One World Trade Center.

When it comes to their own professional lives, Tara says it’s not so much about setting herself apart, but enhancing the family legacy. “I’ve always remained conscious of the fact that I have my family’s legacy and reputation riding with me.”

Darcy agrees, pointing out that she and Tara still use their maiden names professionally.

“We’ve just created a new segment of the family legacy,” she says. As for her own success, she attributes it to an attention to detail, professionalism and creativity, she says. “But over time, I’ve recognized that I can’t do it all—so I’ve built a strong team around me.”

Last year was a testament to the success they have in the market. Darcy brokered investment deals from the sale of a small office condo at 200 Lafayette St in NoHo for $125M to SL Green’s record-breaking $2.6B purchase of 11 Madison Ave. Equally as memorable was Trinity Real Estate’s $3.5B recapitalization of 11 buildings with Norges Bank Investment Management.

Tara and her team are close to filling floors 2 through 10 at MHP Real Estate Services and Clarion Partners’ 180 Maiden Lane, where she is actively marketing the remaining 600k SF. And One World Trade Center, owned by the Durst Organization and Port Authority of New York & New Jersey, has been lately attracting not-so-typical Downtown tenants, like last week’s signing of Progenics Pharmaceuticals to over 26k SF.

Both look forward to what 2016 will bring. Darcy expects the year to be a cross-slate of residential and office deals, with recapitalizations dominating over sales. “We have less in the pipeline than last year, but that can change at any time,” she says. “However, I expect that this will be a strong year for the market.”

Tara has taken on significant assignments for SL Green and RXR Realty in Midtown Manhattan, a market she says has been regaining significant momentum as financial companies came roaring back last year, surpassing TAMI in leasing velocity. 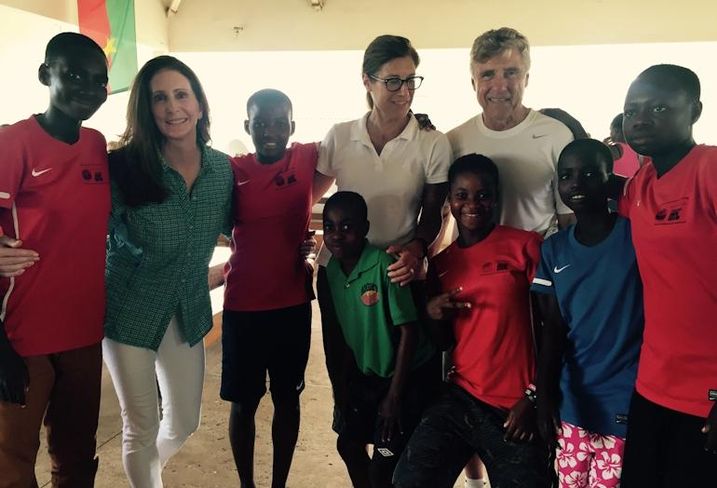 Tara and Darcy have not only learned to succeed in the market from their father, but from each other as well.

“Darcy is exceptionally good at what she does,” Tara says. “She has made her own mark and has taught me we can outrun and outsmart the best of them. At school, I was much more focused on homework and test scores, and she was more of the party girl—but she taught me that working and playing hard can benefit one another and create team bonding, which she does so well.”

Darcy admires how Tara interacts with people and her style. “She’s very polished, very prepared, joins the right clubs, has a worldly group of friends and is impeccably dressed,” she says. “And this is all reflected in her skill set.”

Given their busy schedules, it’s sometimes hard to see each other—at one point, it was only during the holidays. But since Matt’s death, the sisters have made it a priority to get together at least once a month.

And real estate doesn’t dominate the conversation at the table. “We both work really hard, so we like to shut down and catch up with each other. It’s not that the topic doesn’t come out though—we are women and love to gossip,” Tara laughs. “But it’s more of the fun stuff than serious matters.”

Both women also make time for family and life outside of real estate. Darcy loves gardening and tends to her own plots, which include vegetables, perennials and wildflowers. This hobby led her to her favorite charity, the Bette Midler-founded New York Restoration Project, which creates and restores parks and community gardens throughout the city. (She and husband Chris Kraus, a managing director at JLL, just adopted a garden in Brooklyn.)

Both women also love to travel. Darcy enjoys going out to Montana, will be visiting Turks & Caicos in March and has a trip planned to Italy next year. Tara doesn’t get to jet around as often as she’d like, but spent part of December in Morocco and traveled to Paris for the first time in 25 years last May.

When Tara’s home, she and her husband, Arthur Diedrick, enjoy going bird shooting and hosting clients and their families at the Pawling Mountain Club for a day of sport. On the philanthropic side, she serves on the board of the Right to Dream Academy, which is chaired by another industry luminary, Boston Properties regional director John Powers. Last year, she visited the school in Ghana, including the new girls' academy, which she says was “beyond rewarding.” (Above, she's pictured with John and Gensler co-managing director Julia Simet, another board member.) She was also appointed to the board of Ethan Allen in October.

Darcy may soon be the one to say, “I’m so glad we kept it in the family.” Her oldest daughter, Amber, works for Tishman Speyer and has an interest in architecture and sustainability.

However, younger daughter Teal hadn’t shown much interest in the industry and instead chose to study marketing in college—until now.

“We were in the salon recently, and she was talking to the person next to her, a woman who runs marketing for a fashion company,” Darcy says. “She asked Teal what she wanted do after college, and she replied, ‘I’m going to be a real estate broker.’ I said, ‘Really?’ We had never discussed that before. Perhaps she will—she’s still considering her options, but I think she’d be a natural at it, given her exposure.”