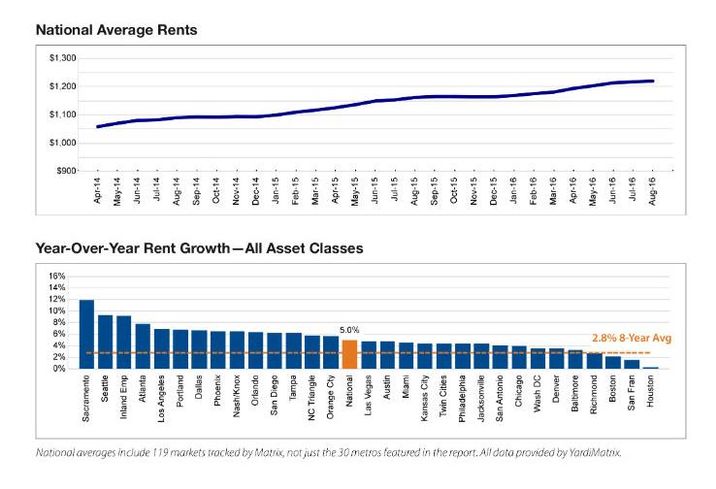 Rents in tech-dominated cities are still on the rise, but they're growing at a much slower pace as people and companies turn from tech-dominated metros to more cost-efficient locations, according to a recent Yardi Matrix report.

Though 60% of Yardi’s top 30 metros have experienced rent gains of 4% to 7% within the past year—Sacramento, Seattle and Inland Empire posting the highest increases—it was the tech-centric cities that saw the most pronounced deceleration in rents through August.

“Markets that are seeing 12% rent growth are unsustainable and it can’t go on,” Yardi Matrix VP Jeff Adler tells Bisnow. “At some point you will have both more supply and you will run people out because they can't afford the rents.”

As waning demand and growing supply continue to impact these markets, Yardi projects the recent deceleration of rents to progress. In San Francisco, the rents increased by 1.6% year-over-year through August, compared to the 12% growth rate rents saw in 2015. Similarly, rents grew by 3.5% in Denver through August, after rising 11% the previous year. Other markets seeing similar rent deceleration include Austin and Boston.

“We expected rents to decelerate this year, it was in our forecast,” Jeff says. “We had a pretty strong beginning of the year and things are slowing down where supply is coming on stream, though there are a lot of places where rent growth continues.”

On a national scale, rents increased by $3 to an average $1,220 in August, beating their record for the eighth consecutive month, according to Yardi's survey of 120 markets. That's a 5% increase on a year-to-year basis, but a drop by 50 basis points compared to the prior month.