A series of 1M+ SF Sears warehouses have sat empty across the country since the company restructured in the late '80s. But now many are finding new lives as mixed-use hubs thanks to grass-roots revitalization campaigns winning out over cries for demolition. 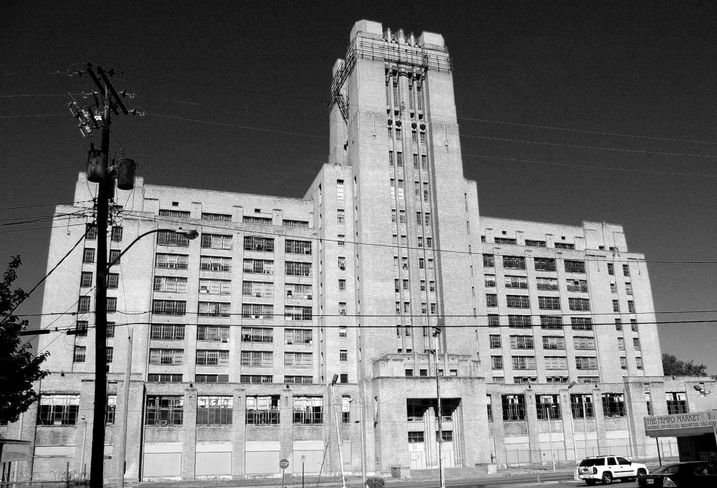 When the 1.5M SF Crosstown Concourse in Memphis has its grand opening on May 13, it will be the latest case nationwide of adaptive reuse for a derelict Sears building. The $200M Memphis project began with a conversation in 2010 between developers and business leaders about what to do with the limestone building that had been abandoned since 1993.

While cities flirted with demolition and development proposals, the large scale of each Sears building made funding highly difficult to obtain. The Memphis project was no different. Crosstown came close to finding new life in 1999 when a Dallas firm attempted to renovate it into offices and apartments. The proposal stalled when the Department of Housing and Urban Development rejected the developer’s loan application. It remained vacant for years despite the city marketing the building to companies like Target for reuse. Crosstown finally fell into the right hands when a group called Crosstown Arts decided to transform it into what it calls a “vertical urban village.” Despite gaining momentum, there was one particularly difficult hurdle, according to an architect involved in the project. 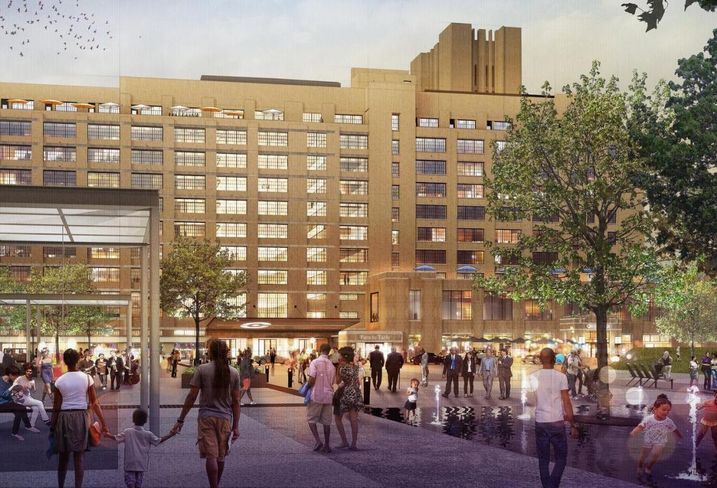 “Believability. To get people to believe this project was possible and to see past this hulking abandoned structure wasn’t easy,” LRK principal Tony Pellicciotti said.

“Memphis has a history of people coming in with big ideas, and they don’t always follow through and deliver,” said Brian Janz, a professor of business at the University of Memphis who also works with Crosstown Concourse tenant Church Health Center. “I was one of those on the side who wasn’t so sure it could happen.”

There was always chatter of demolishing the structure due to it being too large for redevelopment financing. The Crosstown Arts team was not fazed and spent years after its initial conversation lining up funding. Since construction began in early 2015, developers have spent $8M on windows alone, Pellicciotti said. Forty-two million pounds of concrete have been taken out to create three atria to open up the 14-floor building. Residents have been moving into loft apartments on the upper floors since January, and a wide array of companies are beginning to take up space in Crosstown. 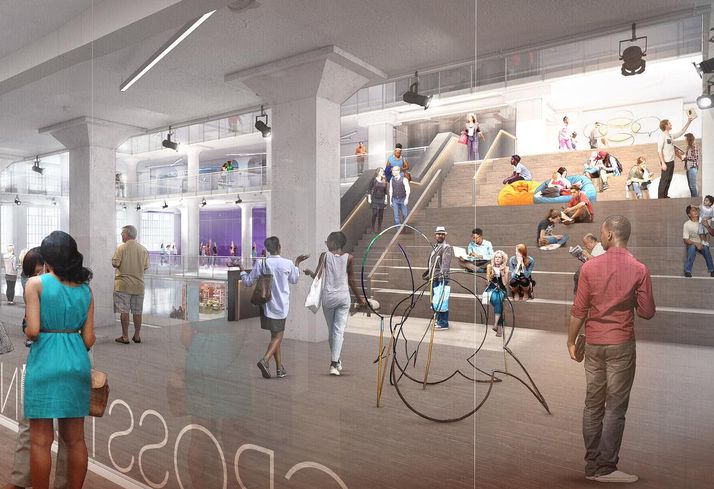 “I’ve wanted to live in that building ever since I first snuck in years ago when it was still abandoned,” said future resident Joey Miller, who will move into a top-floor loft next month.

Miller’s enthusiasm may have predated the rest of the city’s, but the surrounding neighborhood began to attract the attention of local entrepreneurs and startups once construction commenced. Businesses began moving to the area, and Crosstown signed tenants like Christian Brothers University, Methodist Le Bonheur Healthcare and St. Jude Children’s Research Hospital.

“It was a proof of concept before the building was even halfway done,” Janz said. “If you can diversify your tenant list like they did, it’s not just an innovative space — it’s more fun.”

Memphis is not the only city abandoned by Sears. 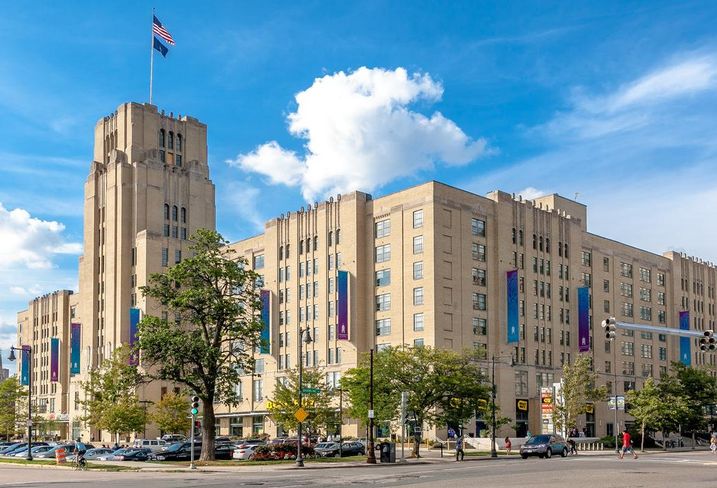 Sears had a close relationship with Chicago architect George Croll Nimmons. He first designed a South Side Chicago mansion for the company’s president in 1903. He was later selected to design the company’s Windy City warehouse and distribution center, which at the time was the largest mercantile building in the world. He went on to design nine of these buildings across the country, including a series of similar Art Deco structures in Boston, Minneapolis and Memphis in the late 1920s. By the early '90s, each of the buildings sat vacant and deteriorating.

Although there were several attempts to demolish it after its closing in 1988, Boston’s Landmark Center was saved from the wrecking ball when it was added to the National Register of Historic Places in 1991. Proposals like turning it into lab space or a parking garage failed, so it sat empty for more than a decade. The Abbey Group presented a successful plan for the space based on the city's need for office space. Redeveloped for $110M, Landmark reopened in 2000 with a mix of offices and retail. Now owned by Samuels & Associates, the 950k SF complex houses a wide array of tenants, including 100k SF for Hatch Fenway, a launch pad for startups. The center has been so popular, Samuels has proposed expanding the facility. 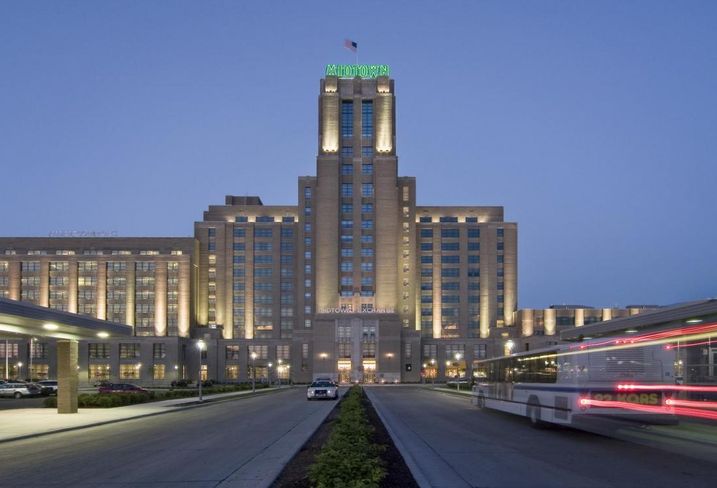 Officials in Minneapolis also spent the better part of the '90s wondering what to do with their monstrosity. Until the Mall of America opened, the Sears building was the largest building in Minnesota. Closed in 1994, the property and surrounding Midtown Phillips neighborhood languished. The property was nearly leveled for a new development, but the city refused to subsidize the proposal. The building remained empty until a wave of Somali and Hispanic families moved into the area in the late '90s and focused attention on improving the blighted property. With revived interest, the city took control of the facility and attempted to find a developer for the boarded-up building.

After different proposals stalled, the city was looking for a quick, quality turnaround. It awarded development rights in 2004 to Ryan Cos., which spent $192M to complete the 1.1M SF mixed-use project in less than two years. 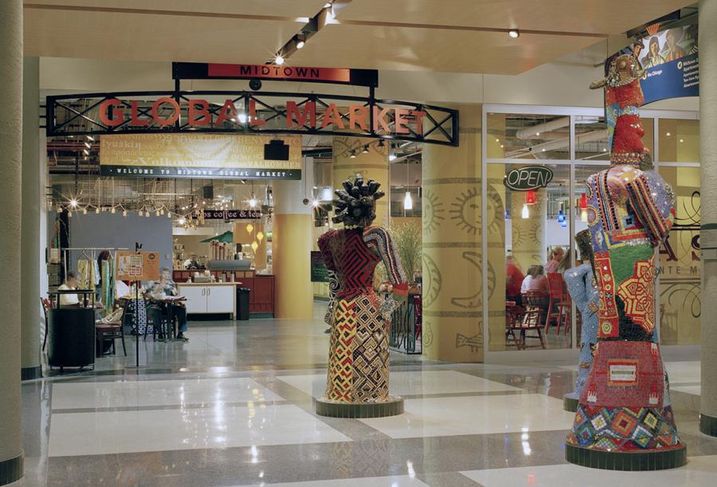 “We had to develop a strategy that allowed the entire building to be converted/reconstructed at one time,” Ryan Cos. regional president Rick Collins said. “That also drove our mixed-use approach — there is no way we could effectively plan to create 1M SF of converted office space at that location. It would have taken an awful long time to get the commitments necessary to move forward.” 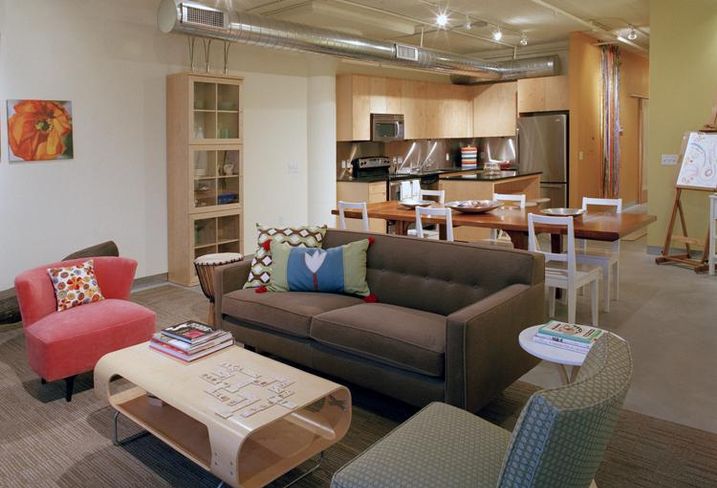 Collins and his company transformed its Sears relic into Midtown Exchange. Now home to apartments, a hotel and a global market, the Minneapolis development wooed Allina Health System into consolidating its headquarters into 410k SF of the building due to the proximity to its flagship hospital blocks away. Midtown’s blend of affordable housing, offices and even a transit center has made it a neighborhood success.

Dave Burrill, director of management at the Ryan Cos., worked on Midtown Exchange and consulted with the teams behind Crosstown in Memphis. While he recognized the challenges and complexities of these projects, he looks at his revitalized building with pride.

“We were told that dog wouldn’t hunt, and guess what? It did.”