When it comes to luxury, hotels and resorts are pulling out all the stops with fancy spas, fitness facilities and chef-driven restaurants. 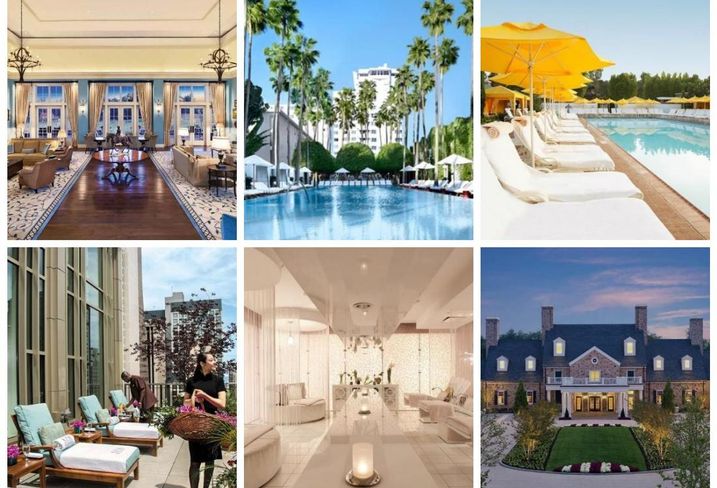 Increasingly, consumers are drawn to properties that offer amenities they are accustomed to having at home, including WiFi, according to San Francisco's Kokua Hospitality president Kirk Pederson. Luxury travel goes a step beyond.

"It's an opportunity to reward yourself and indulge beyond the norm,” Pederson said.

There are other added benefits to luxury travel, including the experiences travelers may not have time to do at home, Avison Young principal Derrick Moore said. These include specialty fitness and wellness options and opportunities to upgrade their eating choices.

"A lot of people are very much aware of their need to live a better, healthier lifestyle, and so they look to the luxury properties to perhaps have a better insight as to what is the latest and greatest, what's the best and what's trending," Moore said. "They look for these things to be in these luxury assets." 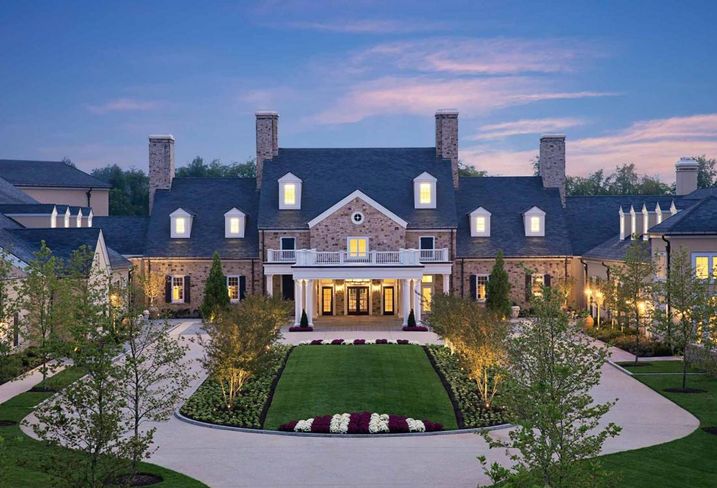 Salamander Spa is a resort in Middleburg, Va., less than an hour from the nation's capital. 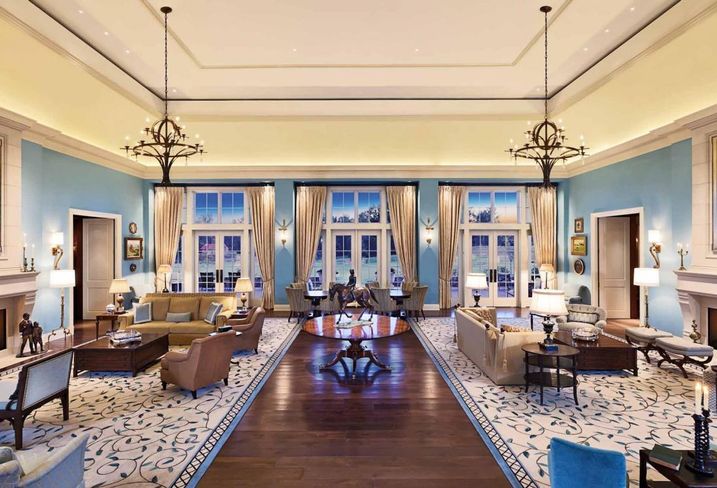 Salamander Spa has 168 guest rooms and 17 suites, equipped with fireplaces, hiking and biking trails, and golf.

Room rates can average around $500/night for an estate room. 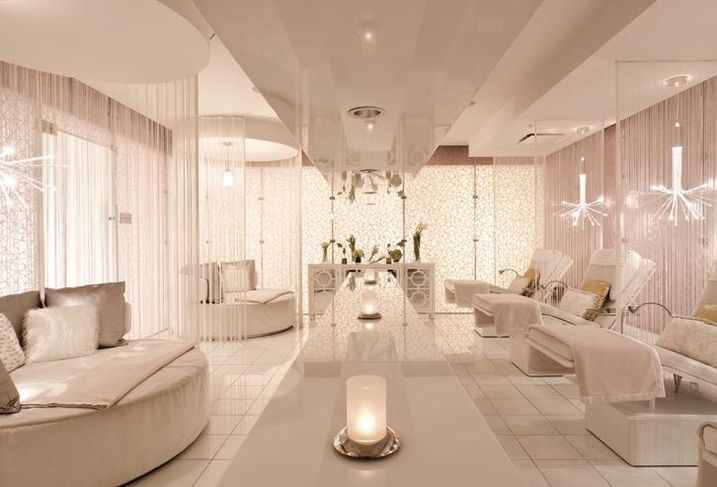 Courtesy of The Ritz-Carlton LA

With a ton of brand recognition in the world of luxury hotels, the Ritz-Carlton LA does not disappoint.

The hotel's amenities include an 8K SF luxury spa. It has nine treatment rooms, including a couple’s suite with a private bath; a co-ed spa sanctuary; men’s and women’s relaxation rooms; two customized aromatherapy steam rooms, each with its own cold plunge shower; and a full-service hair salon and spa boutique.

The hotel also offers guests a large club lounge, a rooftop pool and bar on the 26th floor, and more than 100K SF of meeting and event space.

The Ritz-Carlton LA is home to WP24 by Wolfgang Puck restaurant and Nest at WP24 lounge, featuring Puck's Asian-inspired fare.

The hotel also shares a 54-story tower with the Ritz-Carlton Residences at LA LIVE.

Its largest suite, the 3K SF Ritz-Carlton Suite, has an entertainment room, a media corner, a kitchen and a formal dining area. 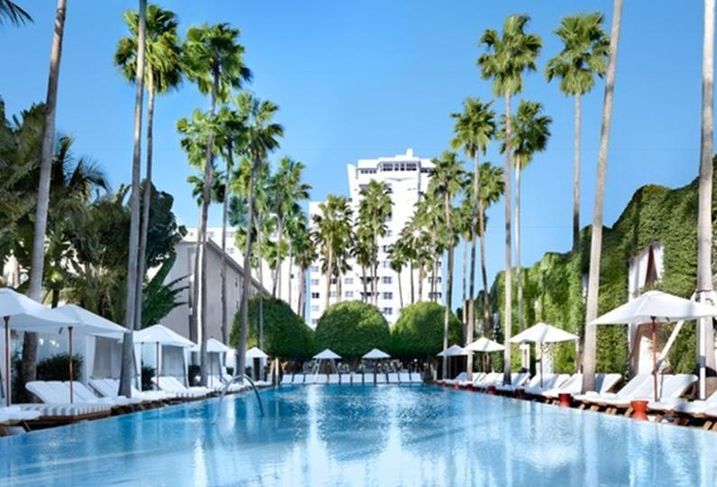 Courtesy of The Delano South Beach


The Delano South Beach in Miami

The Delano South Beach in Miami is topped by its 3K SF Agua Spa on the hotel's penthouse level.

There are anti-aging services and massages, including in-room for hotel guests; body treatments; and manicures and pedicures.

Unique offerings include a three-hour "Jet Lag Eye Therapy," for $450, complete with a red wine facial and a hot lava rock massage. The property also boasts a 24-hour fitness center.

The hotel's Leynia restaurant features traditional Argentinian cuisine fused with Japanese influences served tableside from roaming bicicletas, or bikes, imported from Argentina. Sushi and daily fish specials are flown in from around the world.

Room rates can start around $348/night for a room with double beds. 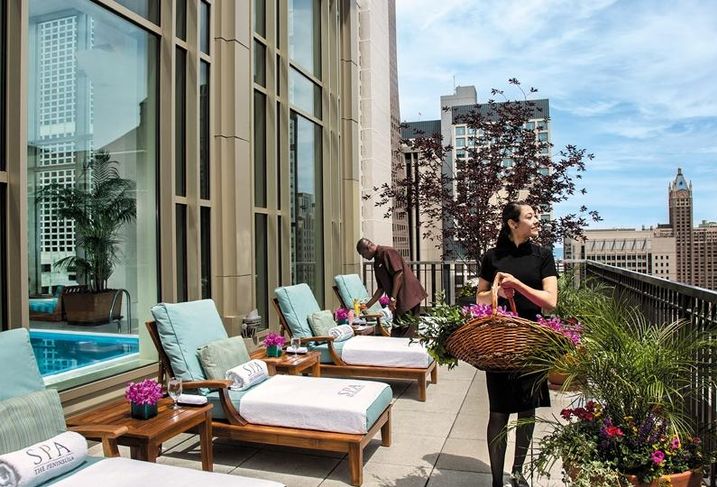 Courtesy of The Peninsula Chicago

Smartphone charging stations and Nespresso machines are standard in the rooms at The Peninsula Chicago.

The hotel also has a handful of eating options, ranging from European fare at Pierrot Gourmet to Cantonese and Shanghainese at Shanghai Terrace. The lobby offers high tea and a popular Sunday brunch.

It generally costs $500/night for a single room with double beds. 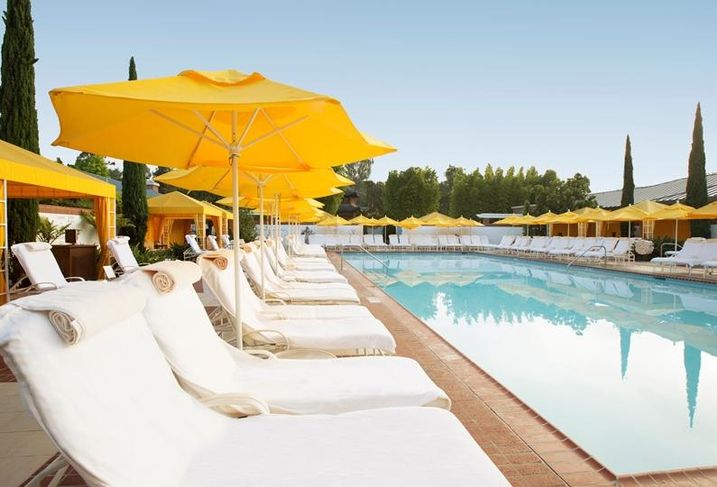 The Four Seasons Hotel Westlake Village, in the San Fernando Valley near LA, offers deluxe accommodations, including a presidential suite, and a 40K SF spa.

The offerings include day retreats and programs, including "Wellness Your Way" and "Taste of Wellness."

There are also gardens and an art gallery on the property.

The rate is around $450/night for a room with two double beds.

For more about trends in the hospitality industry, experts from across the U.S. will gather in Los Angeles for Bisnow's Lodging and Innovation Series on April 21.