Demand For Luxury Hotels Within Airport Terminals Is Taking Flight

Two weeks ago, Michael Dahmer missed the last flight back to Atlanta thanks to congestion around the Dallas-Fort Worth International Airport.

The senior director of Lee & Associates in Atlanta had 24 hours to kill before his next flight, and the last thing he wanted to do was brave traffic and head back into the city again. Instead he chose to check in to the Hyatt Regency, the airport hotel but a simple jaunt from Terminal C across a parking lot to the hotel. 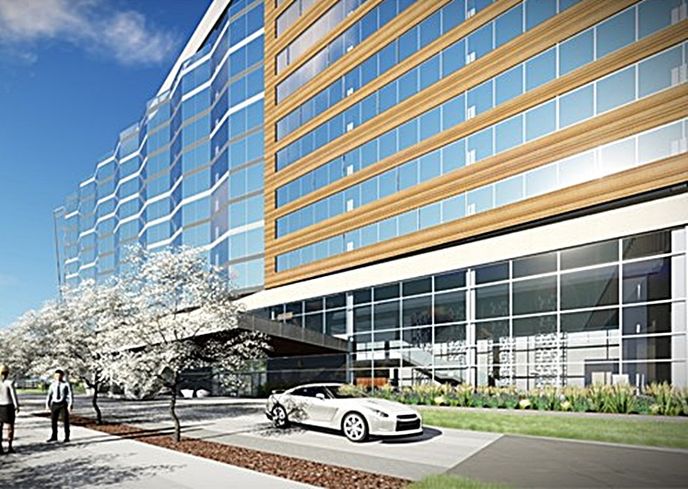 “The reason I chose the hotel is because I was utterly exhausted and I was in a bad mood,” he said. “Honestly, at that point, I was prepared to pay even $400 a night.”

The room rate for the business leisure hotel was not too much, Dahmer said, and he was pleasantly surprised by his stay.

“It was sexy as hell,” he said. “It was triple A. I love it. I would come up with a reason to stay there again.”

Dahmer is one example of the types of customers hotels are chasing in this growing trend of upscale business and luxury hotels going into or near airports.

Historically, airports had been served by nearby limited-service hotels. After all, the land around airports tends to be less expensive than in the central business district, said Jan Freitag, senior vice president of lodging insights at STR. Today, that is changing as airports themselves get into the hospitality game through high-end hotels being developed in former terminals or within walking distance to a terminal. 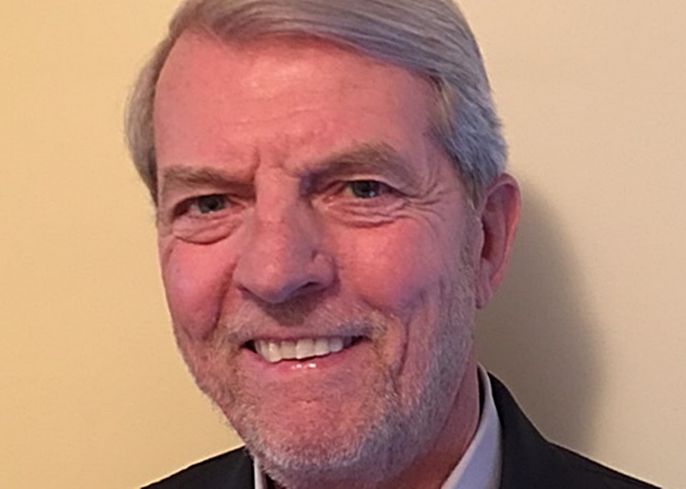 One fundamental reason for the rising trend is a combination of convenience and high-quality rooms, said Thomas Engel, president of Boston-based T.R. Engel Group, which provides hospitality-related services to hotel investors. TRE has been advising the joint venture ownership of the InterContinental at the Twin Cities' airport.

The InterContinental Hotel Group is planning to flag a 291-room InterContinental hotel directly connected via skyway to Terminal 1 at the Minneapolis-Saint Paul International Airport. The hotel is scheduled to open next year.

“You can fly in on a Tuesday, conduct your in-house meetings or area business on a Wednesday and depart on a Thursday. You're not conflicted with downtown commutes and other distractions,” Engel said.

The Metrics Are There

Engel said there is an untapped demand from luxury hotel patrons in need of accommodations within or even near the airport.

According to hospitality data tracker STR, since 2011, occupancy rates at luxury-branded hotels within proximity to a major airport have ranged from the high 60% to mid 70% range. Last year alone, occupancy averages were nearly 72% on a supply of more than 1 million luxury rooms. And so far this year, occupancy rates have climbed to 74.6% occupancy rate. Luxury airport area hotels also have seen strong revenue growth since 2012, from a total of $105.4M in 2012 to $154.8M last year, according to STR data.

Rising demand has led to a rapid supply increase of luxury hotels both connected to and within the immediate vicinity of an airport within the past year. From 2015 to 2016, there was a 13% jump in new luxury rooms at airports, according to STR. The project pipeline — which includes projects from Minneapolis and Atlanta to a potential 200-room hotel connected to a planned $4B terminal project at New York's LaGuardia Airport — could make that number rise even more.

In some cases, demand for airport hotels is dependent on weather. Airlines will sometimes put crew and passengers into airport hotels when flights are canceled, Freitag said.

“That influences the performances a little bit,” Freitag said.

But he said there has been a rise in airports expressing interest in getting into the luxury hotel game. For one, the cost to build an airport-connected hotel can often amount to much more than a stand-alone facility, especially when accounting for the planning and hurdles airports have to go through to receive a green light with the Federal Aviation Administration. 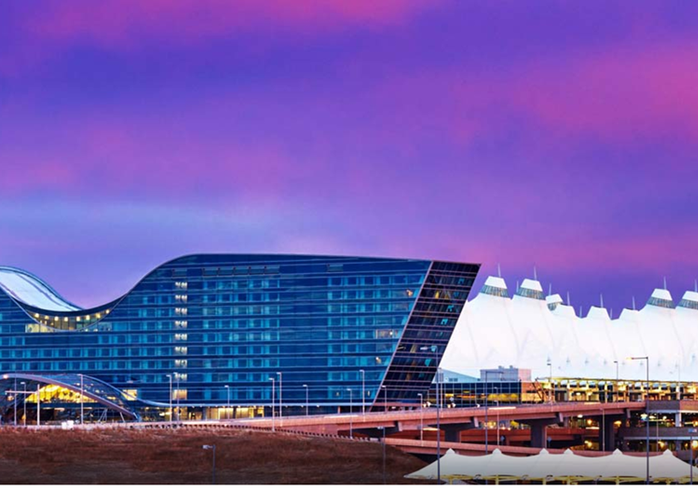 In 2015, Denver International Airport opened the $719M Westin Denver International Airport hotel, a sleek hotel right at the airport terminal with more than 500 rooms, conference rooms and a transit station that connects directly to Union Station in Downtown Denver. Officials previously stated they expect the hotel to generate up to $2M in revenue annually, according to Aviation Business.

Denver is the latest in a slew of markets to debut an on-campus airport hotel. Developers all over the country are eyeing or in the process of building high-end airport hotels. They include:

This influx of new luxury hotels at airports could put real pressure on the run-of-the-mill hotels nearby, Engel said.

“I think the brands have realized that select service [and] limited service, the 25-year-old Sheratons, are no longer just the sole beneficiaries of airport traffic,” he said. “[Luxury hotels] are not going to put the Courtyards out of business, but they're going to be stronger entities.” 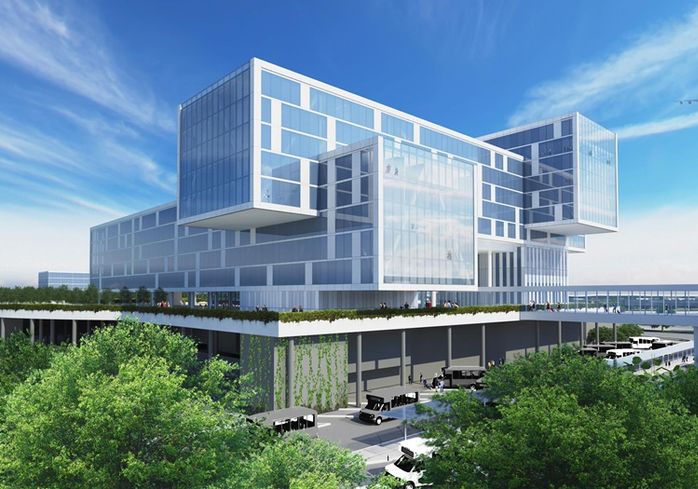 Having a high-end Westin connected to Detroit Metropolitan Airport has paid off for both the operator and the airport authority, Wayne County Airport Authority chief financial officer Terry Teifer said. The Westin's airport location is the highest-performing hotel in Southeast Michigan, with an average occupancy rate of 75%, Teifer said.

“It was really all about customer service,” he said, referring to the decision to build the $100M Westin hotel onto the $1.2B McNamara Terminal at the airport in 1998. The hotel and terminal, at the time for Northwest Airlines (which merged with Delta Air Lines in 2008), delivered in 2002.

“It was really built as an amenity that drives the hub,” Teifer said.

The authority is already reinvesting in the hotel – which has net revenues of up to $4M a year – with a $15M renovation program paid all in cash from the airport's Furniture, Fixtures & Equipment reserves.

Like other airport hotels, meeting business has been a big part of the demand driver. In some cases, experts said, business travelers can fly in and out within the same day without having to leave the airport and fight congestion to get into the city. Teifer said in a couple of cases the Westin hotel was able to provide anonymity to groups as well. Twice, he said, the National Football League owners met at the Westin without arousing the curiosity of the public, which likely would have been the case had they held their meetings at another hotel in Detroit.

Not For Every Airport

STR's Freitag said adding a luxury hotel component to an airport only makes sense for a limited number of airports – particularly those considered hubs and with international direct routes. It helps if the city itself has a strong corporate presence, assuring continued demand from business travelers, Engel said.

But for Engel, those two factors are not the sole reasons an InterContinental makes sense in Minneapolis. Another huge reason it is a good fit is because the airport is connected by rail to the Mall of America, a mall that has ascended into tourist attraction status and sees some 40 million shoppers a year, many from out of state, he said.

“I almost fell off my chair when I heard this number,” Engel said.

Engel said the InterContinental receives a good portion of demand from guests simply flying into Minneapolis/Saint Paul to shop at the mall.

“In a nutshell, what you have is a perfect storm,” he said. "It's got to be a combination of corporate underbelly, very good ... leisure amenities like a Mall of America. And finally, a good economy."

CORRECTION, MAY 28, 2:45 P.M. ET: A previous version of the story incorrectly identified Michael Dahmer's employer. The story has been updated.