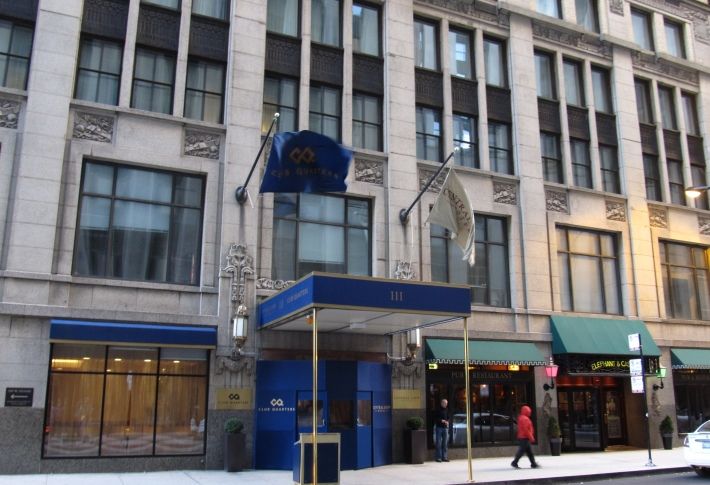 The limited-service Club Quarters-branded hotels in the portfolio are in Chicago, Philadelphia, Boston and San Francisco. Closed since March, the four hotels have 1,228 rooms and were collectively appraised at $422.5M in November 2017.

Previously, Blackstone had skipped a payment on the loan, the Financial Times reports. In April, the investor requested a forbearance agreement, according to DBRS Morningstar.

A subsidiary of Blackstone, BREP VII, originally sponsored the loan, allowing the investment giant to buy the properties in 2016. The loan had a two-year term plus three options to extend for one year. The borrower exercised the first extension option last year, scheduling the loan for maturation in November of this year.

"On June 24, 2020, the special servicer confirmed that talks with Blackstone had ceased and negotiations were ongoing with the mezzanine lender, Bank of America, who originated a $61.3M loan at issuance to fund closing costs for Blackstone’s refinance of the subject hotel portfolio," DBRS Morningstar reported, adding that part of the debt has been trading for as little as 76 cents on the dollar recently.

"This is a very small investment that had been written down prior to COVID-19 as a result of unique operational challenges," Blackstone told Bisnow in an emailed statement. "We will continue to work with our lenders and the hotel management company to create the best possible outcome under the circumstances for all parties, including the employees.”

In the company's most recent earnings call, Blackstone CEO Jon Gray also stressed that about 80% of its real estate portfolio doesn't involve the highly distressed categories of hospitality and retail, but is instead in logistics, office and residential space.

Though the U.S hotel market has enjoyed a slight recovery recently, it has still been crushed by the coronavirus pandemic. In May, occupancies reached 33.1%, compared with 84.8% a year earlier. Revenue per available room came in at $26.35 in May, down 71% year-over-year.

STR posits that it will take until 2023 for U.S. hotel occupancy to reach its 20-year historical average.

"With lower occupancy levels, and the influence of discounting as hoteliers compete for market share, [average daily rates] could show a slower recovery timeline even with more normalization each quarter," STR Senior Vice President of Lodging Insights Jan Freitag said.

In May, 16.2% of CMBS loans associated with lodging were in special servicing, up from 11.4% the month before, according to Trepp data.