Beyond The Bio: 16 Questions With Stay Alfred Co-Founder/CEO Jordan Allen

Jordan Allen was an airborne ranger and captain in the United States Army. He served in war zones in Iraq and Afghanistan for eight years. But what really scared him was hiring the first full-time employee at Stay Alfred, the flexible accommodations firm he co-founded and now leads as CEO. 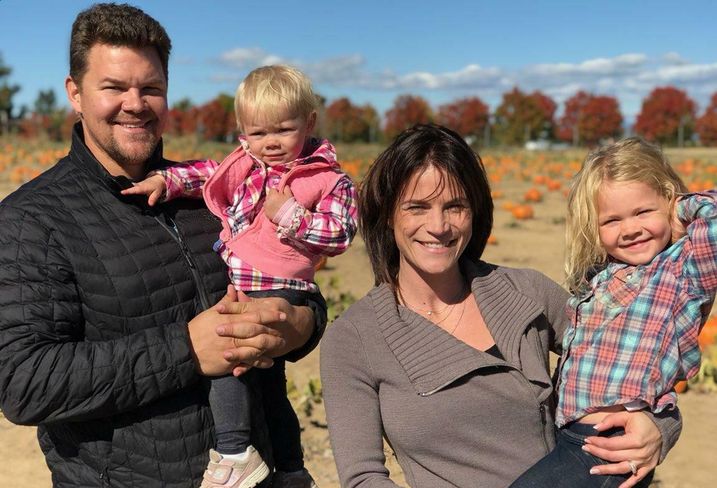 Courtesy of Stay Alfred
Stay Alfred co-founder and CEO Jordan Allen with his wife, Nancy, and two of their children, Sofie and Stella

Stay Alfred is a flexible accommodations firm that offers upscale travel residences in prime downtown neighborhoods; it has over 1.5M SF under management. The company offers property developers and owners a “master lease” model for short-term rentals, including individual leases, partial building leases, full-building leases and national partnerships with developers.

Allen, who co-founded Stay Alfred in 2011, maintains his Army lifestyle by beginning his day with a 4:30 a.m. “gut-wrenching” workout. He swings by the 24/7 customer support call center daily, and spends a great deal of time coming up with new opportunities for the firm. He also mentors Gonzaga Business School students through startup funding competitions.

In his spare time, he teaches his two little girls, Sofie and Stella, and his 8-month-old son, Brody, to be “Army tough.”

Allen: Stay Alfred operates upscale travel apartments in the best downtown locations in 32 U.S. cities so guests can live like locals while enjoying the amenities you’d expect in high-end apartments.

Allen: Ever since I was a kid, I’ve always been pretty entrepreneurial. I had a bunch of odd jobs from mowing people's lawns, lemonade stands and even selling rocks, which was kind of an '80s thing. If I weren’t at Stay Alfred, I’d probably find some sort of sales role or start up another company.

Allen: Because I started so young, I’ve had tons of jobs, from a milkman to a butcher and even a repo guy. I worked at a beer factory. And, of course, the Army where I served two terms in Iraq and Afghanistan. There were some pretty tough days in there so that was both one of my best and worst jobs. If we’re talking pure misery, though, my worst job was working at a candy factory. It was just awful. The owner treated us so poorly that I was delighted to get fired — thank God! I've been focused on Stay Alfred for so long now, though, that I’ve almost forgotten about the other stuff. 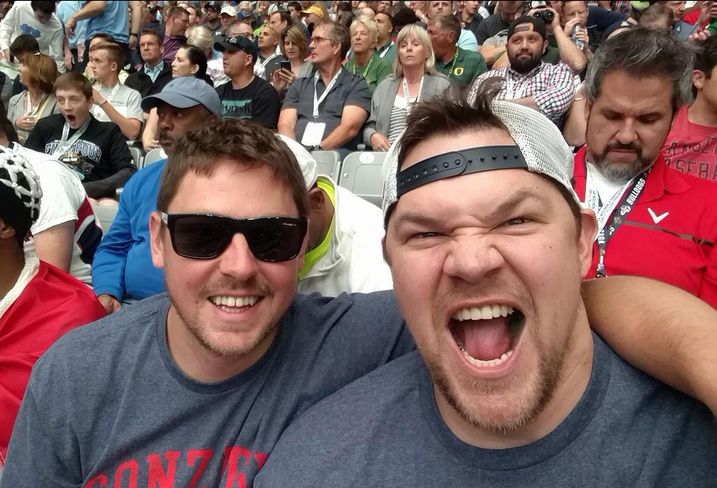 Courtesy of Stay Alfred
Stay Alfred co-founder and CEO Jordan Allen (right) rooting on the Gonzaga Bulldogs with his brother, Brooks, at the 2017 Final Four Tournament.

Allen: The first real deal we did at Stay Alfred wasn’t actually property related. We developed and sold a dynamic pricing system to RealPage and it was my first real experience with mergers and acquisitions. I learned so much about how companies present their solutions. It was really fun and also propelled our interest in developing more proprietary technologies, which has been a huge market advantage to the company’s operations and guest experience.

Allen: When Stay Alfred was just starting to grow, we had the infamous Click Clack Futon incident. Basically, we thought we could make more money if we used futon-style couches that folded down to sleep more people at night. Without doing a ton of testing, we ordered a couple hundred of these things and installed them in our units. Of course, they started breaking in a matter of months and were permanently flat, so people would check in and have nowhere to really sit in the living room. It was a guest experience nightmare.

Allen: I would like to see more innovation in the commercial real estate industry. It’s so expensive to build a commercial real estate building that it creates a ton of risk adversity. A lot of great ideas never make it to market because they aren’t as practical as the knowns and the stakes are too high. When you think about it, innovation never feels comfortable at first.

Allen: For better or worse, most of my pet peeves fall into the loud eating noises category. If you heard my dad eat licorice ... I swear it’s one of the most horrific things you could endure. Cereal is a problem too. Serious crunch factor plus all the milk slurping tendencies. I definitely have food noise issues.

Allen: By far, my best mentor has been Tom Simpson, co-founder of etailz. Tom is sort of The Godfather of startups in Spokane, and we’ve been collaborating for nearly five years. Tom’s guidance has been really helpful in opening my eyes to opportunities outside of the region. He has strong business instincts and understands what it takes to mature a startup globally. I really admire how active Tom is in the Spokane business community. He makes time to meet with anyone chasing their dreams and is such a solid guy.

Allen: It seems like I’ve gotten a lot of bad advice. Probably the worst advice I've ever gotten is not to grow Stay Alfred too quickly. Being in a smaller city, people tend to be more conservative and would tell me to ease up, that the company was growing too fast. Thankfully, we didn’t listen.

The best advice I’ve gotten is to just pick up the phone and call people. Don't waste a ton of time doing research. Jump into action and call with your question or reach out for a demo to get a conversation going. 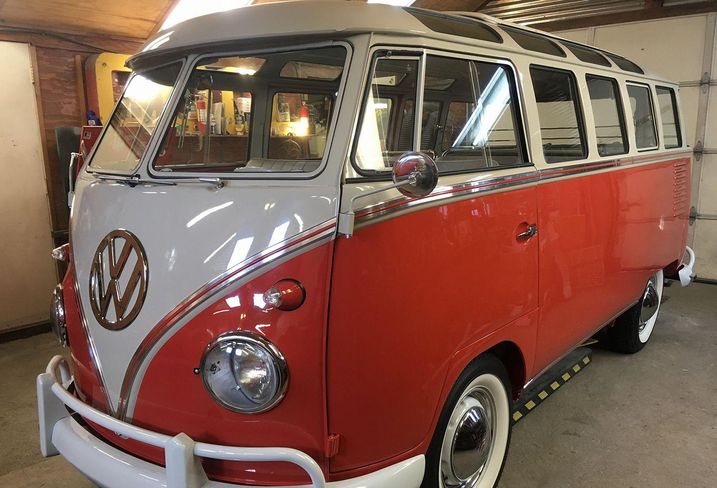 Allen: I'm not a cheap person, but I do have a hard time dropping large amounts of money on material stuff. When it comes to classic cars, though, I lose my mind. My wife said that if I bring one more thing back to the house with tires on it, I can just fill out the divorce papers, and I totally get it. Right now, we have a unique 23-window VW bus, a 1961 Corvette and a 1967 Bronco. Sometimes I think about scaling back, but I just can’t part with any of them.

Allen: Hands down, my favorite restaurant is Coop’s Place in New Orleans. It’s a Cajun Creole spot that feels like a fish tank with the water drained out. Their Chicken Tchoupitoulas is just unbelievable.

Allen: Are you the same person in real life that you are on TV?

Allen: Gosh, I spent eight years in a combat zone in Iraq while I was in the Army, so risk was part of everyday life there. I saw some pretty crazy things. But, by far, the biggest risk to date was hiring our first full-time employee at Stay Alfred, Keari Sager. It felt like the most serious responsibility we’d ever taken on, and when she accepted the job offer, she ran out and bought a car, so we thought we might ruin her life. It seems funny now, but it was pretty intense at the time. 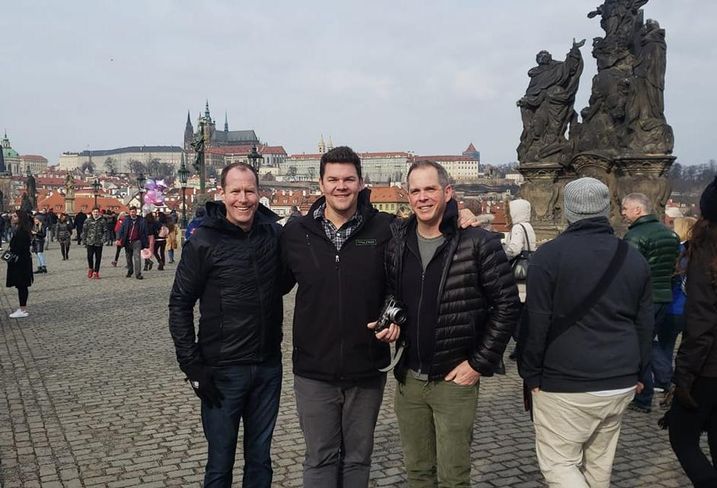 Allen: It’s a tie. In the summer, Riverside State Park in Spokane has got to be the most beautiful urban park in the country. It has two waterfalls that feed into a giant waterfall and really nice paths for people to explore. I’ve not seen anything like it in the middle of a city, and there are plenty of festivals and events going on to draw crowds. And, just over the Idaho border is Coeur d’Alene. It’s basically the Lake Tahoe of the Northwest. It’s pretty amazing with plenty of nightlife in the summertime and a super nice golf course, complete with the world’s only floating green.

Allen: The first thing that scared me as Stay Alfred started taking off was the regulatory issues around short-term rentals — and also getting involved with capital partners. I’d heard so many horror stories, and I feel so fortunate to have found the best possible partners in the world. They are truly fantastic. Today, growing fast enough keeps me up. You know, balancing the brake and gas pedals.

Bisnow: What are your passions outside of work?

Allen: I love mountain biking. Right now, though, with three kids under 5 years old, my wife and I are mostly focused on supporting their activities like soccer, swimming and dance, which is darling. We started skiing as a family this year, which was initially awful, but we stuck it out and it ended up being one of the best things we’ve done as a family.

CORRECTION, MAY 21, 9:26 A.M.: An earlier version of this story conflated Stay Alfred and Hello Alfred and incorrectly attributed a partnership. The story has been updated.