Call it Extreme Makeover: Convention Center Edition. The country's busiest convention destination, NYC's Jacob K. Javits Center, has a new look after a $465M, four-year renovation. We sat down with the project's architect to discuss its transformation (and to see if there was any leftover Comic-Con swag). 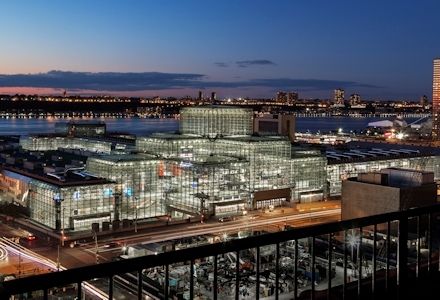 With FXFOWLE and Epstein as the design team and Tishman Construction, an AECOM company, as construction manager, renovations were launched in 2009 on Javits, originally designed by James Ingo Freed of I.M. Pei and Partners. Despite the activity, the convention center generated $6B in economic activity for the state throughout those four years and 400,000 room nights at area hotels annually. (You may have gone to a conference there and didn't even know construction was happening.) Among the changes: a 110k SF expansion adjacent to the existing facility, now known as Javits North; a new sustainability strategy; and a transformation of the building's appearance and systems. 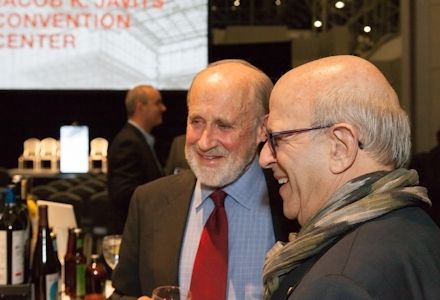 FXFOWLE founding principal Bruce Fowle (pictured with AIANY 2014 president Lance Jay Brown at the opening reception) says the convention center--though cutting edge for its time--had a "Darth Vader" character ever since it delivered in 1986. A nod to London's Crystal Palace, Javits was fraught with problems from the beginning, since the original design was impacted by a lack of necessary technology and funds, as well as politics. It was also isolated from Manhattan's hustle and bustle (which will be transformed once the 7 line subway extension opens next year and through Related and Oxford's ongoing development of the 26-acre Hudson Yards). 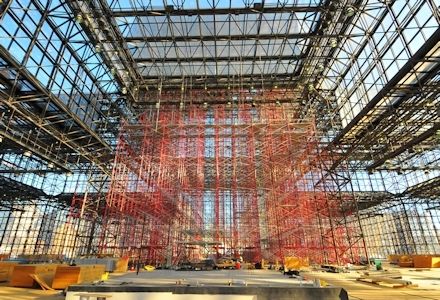 For one, the glass used was "dark and gloomy," since that was the only type that met performance standards of the day, Bruce says. Replacing all the glass turned out to be complicated and dangerous, so the team replaced the entire curtain wall instead, which now has 3,722 panels of energy-efficient, high-performing glass and 2,400 skylight panels. (The story below explains how Tishman Construction did it while the convention center stayed open.) It's reduced glare on the inside, and it's much less reflective on the outside, he says. (The glass is also specially etched so that birds will notice the surface... does that make it LEED-Goldfinch?) The new, lighter atmosphere encouraged the architectural team to lighten up the interior design from darker, drab colors to cooler, softer grays. 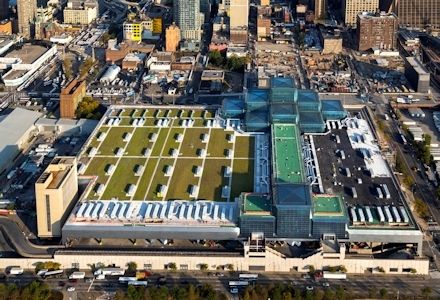 That wasn't the only step toward LEED Silver. In addition to installing high-efficiency HVAC units and lighting, the convention center boasts a nearly seven-acre green roof—the second largest of its kind in the country, after Ford's Detroit factory. (Read more about its transformation from when we visited New York Convention Center Operating Corp CEO Alan Steel over the summer.) In addition to insulation and water retention, the roof will reduce the city's heat island effect, Bruce says. These upgrades are expected to reduce Javits' energy consumption by 26%. 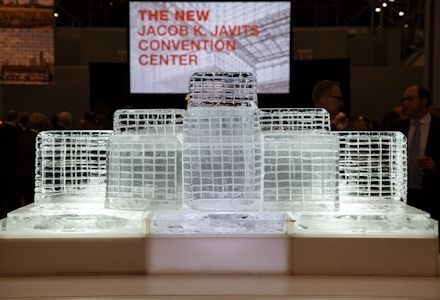 Also upgraded were the entryways and the glass-encased River Pavilion overlooking the Hudson, the latter of which Bruce thinks will be a good events space to compete with the likes of the Waldorf Astoria and Chelsea Piers. "People's attitudes about Javits have already changed for the better," he says. Above, an awesome ice sculpture by Okamoto Ice Studio shows the renovations. (Is this why we're suddenly excited for the Thanksgiving release of Disney's Frozen?) 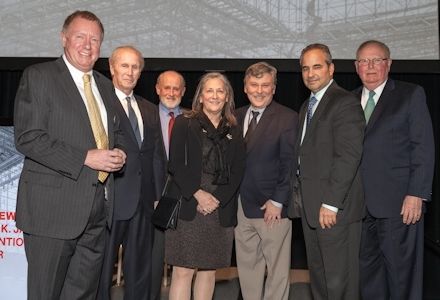 Here are Alan, Javits chairman Henry Silverman, Bruce, New York Convention Center Development Corp prez Barbara Lampen, Tishman Construction EVP Mike Mennella and CEO of the NY/NJ/PA regions Jay Badame, and Hotel Association of New York CEO Joseph Spinnato at the opening. The team's not completely done. A reconceptualized public plaza will one day grace the front entrance, with outdoor seating, retail kiosks, and plantings, while all vehicular traffic will be moved away from the plaza; the team has already been successful relocating city buses. (We would've helped... buses seem to avoid us without even asking.) But that part of the plan still needs governmental support, Bruce says, so there's no timeline yet.