REITs Have The Second Highest Net Income Per Employee Across All Industries, And You'll Never Guess Which Industry Took First 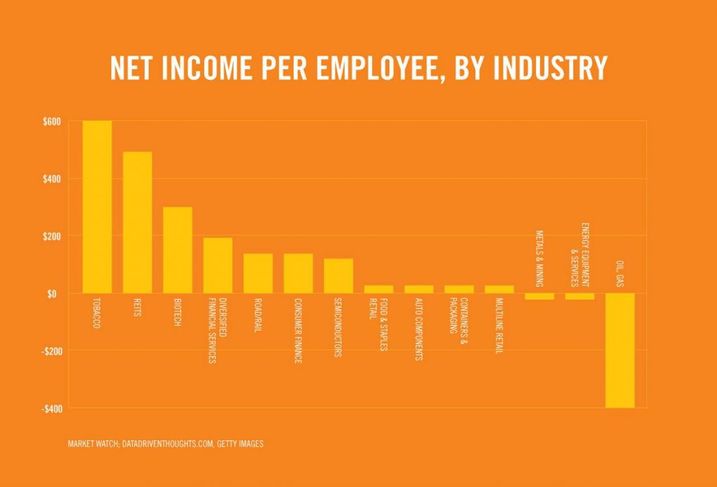 Net income per employee (NIPE), calculated by dividing a company's net income by its number of employees, is a widely accepted metric of how efficiently a company uses employees, and it's easy to see why: the higher the NIPE, the more value each team member is generating for the company.

But the author of this study, Erik Rood, writing for a blog called datadriventhoughts, extrapolates further and argues that NIPE can be an overall indicator of how well a company is managed.

“It puts an emphasis on the return on talent, arguably a company’s most valuable asset,” he writes. “Additionally, in an increasingly digital economy, return on invested capital becomes a bit less of a complete metric, as more and more intangible assets are created by employees, offering a rich source of future value.”

Now that you've been sold on NIPE's importance as a measure of a company's health, you're no doubt much more interested in the findings depicted above. You'll notice that REITs placed second, and in first—tobacco companies?

It seems massive decline in tobacco usage across the developed world has forced the tobacco industry to be highly efficient with its remaining employees. The average employee at a tobacco company makes, in theory, an amazing $609k.

Though surprising, that high figure makes sense, given the collective belt-tightening cigarette companies have had to endure following the public's growing awareness of the habit's tendency to cause cancer.