The unemployment rate fell to 3.5%. 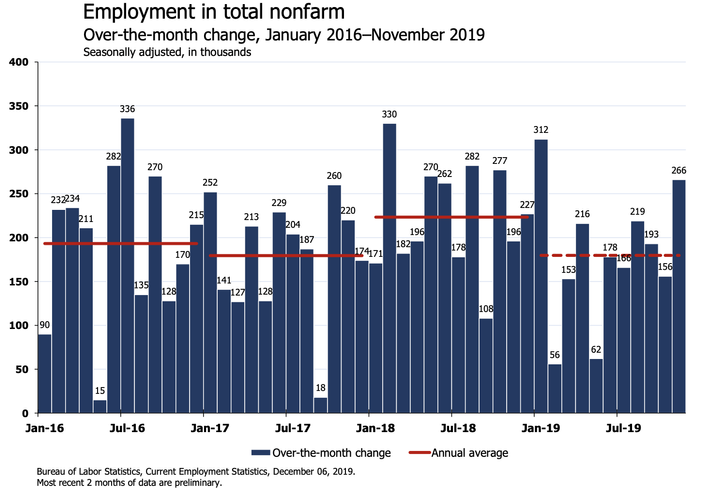 Manufacturing added 54,000 jobs in November, reflecting the end of the GM strike, which returned 41,000 workers to employment in motor vehicles and parts.

DAMN - this is 70k more than analyst predictions. Part of this is GM striking workers returning, but even given that, it is way above expectations. https://t.co/qzV1vsKRfZ

The resilience of this expansion is just amazing. Since 2011, the economy has pretty consistently produced around 150-200k jobs per month. There are occasional fits and starts when we think that trend has changed, but really, it's just one long straight line. pic.twitter.com/QdCo6E14kT

Really amazing to see such strong growth in payrolls. Not clear where the workers are coming from, given more muted trends on labor force participation (which actually ticked down in November)

Also interesting: Prime-age women are holding onto employment gains after a big pop in October. That's good news because it suggests that it may have been more than statistical noise. pic.twitter.com/4bl8wJ12Ht

Good news to see job gains across the board in November:

What's up w/ all these supposed hiring constraints?? 3 sectors: retail, leisure and hospitality and transportation & warehousing were collectively losing 10k jobs on a 3m avg basis in April and are now adding 94k--quite a u-turn!#payroll pic.twitter.com/GyvEvO3ct5

How do you average 205k jobs over the last 3 months while 10 years into the recovery? By not being at full-employment yet.

There are a lot of moving parts with the jobs numbers this year (strikes, census workers, benchmark revisions). This chart adjusts for them all and finds that job growth so far in 2019 is 168,000 per month. That's a decline from recent years, but still solid. pic.twitter.com/QJ3cUxbNUR

A large part of the job growth (15.4%) came from the returning @UAW workers from their strike against GM. So, motor vehicle employment was up 41,000, but remains 2,000 lower than the month before the strike. @AFLCIO #JobsDay #NumbersDay

Your monthly reminder of where we are on wages: From late 2017 through late 2018, it looked like wage growth was picking up. THAT ENDED. Wage growth has been backsliding this year. #JobsReport #WagesReport pic.twitter.com/fYnm2EWaxK

One thing that really troubles me is the pace of wage growth. Workers are getting a smaller cut of what we produce than they used to. Everyone thought that a strong labor market would help change that, but worker's share (compared to profits) of GDP remains stubbornly low. pic.twitter.com/BodCpHhoqB

Don’t get too excited, 27% of November jobs created are constitutional lawyers. 9% are TikTok dance consultants.