Nonfarm payroll employment increased by 304,000 jobs in January, the U.S. Bureau of Labor Statistics reported Friday, marking the country's 100th straight month of employment gains. The unemployment rate ticked up slightly to 4% from 3.9% in December. 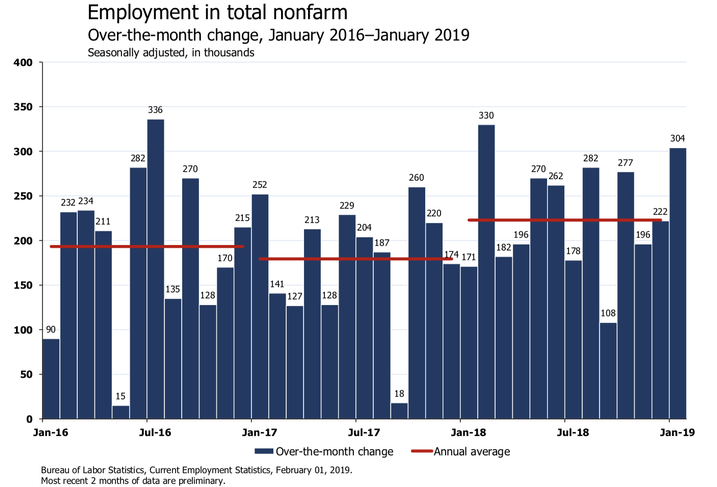 Employment was up in several industries, including industries closely related to real estate. Employment in leisure and hospitality rose by 74,000 jobs in January, and construction employment rose by 52,000 jobs. The construction industry has added 338,000 jobs over the past 12 months.

Another upside surprise jobs day! Smoothing out noise, mnthly payrolls up big 241K over past 3 months; nom wg growth > inflation by > 1 ppt (ie, real gains); labor force still showing room-to-run, and all this w/out price pressures. The benefits of (near) full emp, people!!

Another amazingly strong month for job growth--304K--compounds one of the biggest mysteries in the economy today: why does GDP growth appear to be slowing while job growth is picking up?

Unemployment rate edged up to 4.0%.

Main takeaway: strong jobs growth numbers, but workers seem to have had to take on part-time work to make ends meet during the shutdown

Still, a two-month average of +263k jobs, at this stage of hte expansion, is muy bueno. https://t.co/QDiobpQTGD

The headline jobs number blew away projections, and yet the wage increases were less than expected & unemployment rate rose. https://t.co/mcK8Ha4Ltm The initial reaction from bond markets is that this is a positive report that slightly increases the odds of a rate hike. pic.twitter.com/DMQ6IPDjPM

Demographics time. With the huge caveat that this was one month and the trend is key, 25-34 women are still pouring back into the labor market. pic.twitter.com/492SnhLn9Z

Even in a month like this one...some industries suffer. Again we saw a lot of brick-and-retail store industries losing jobs. pic.twitter.com/HNwttpJ3ru