Economists — And The President — React To May Jobs Report On Twitter 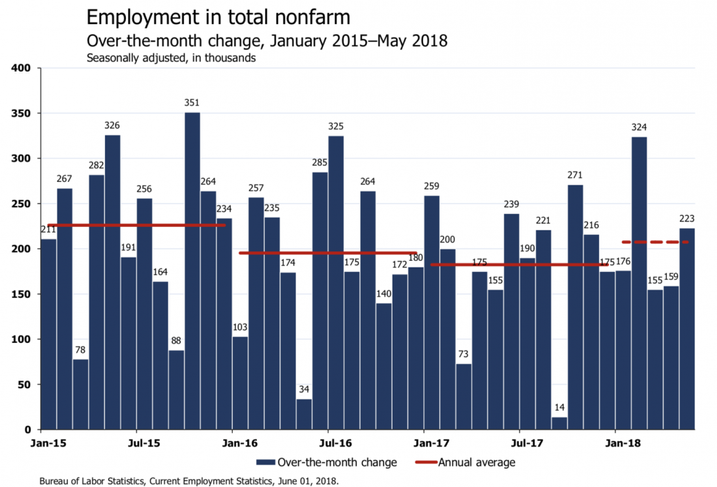 Employment was up in several real estate-related industries, including retail, construction and healthcare.

President Donald Trump broke with tradition and tweeted that a positive jobs report was forthcoming more than an hour before it was released.

Looking forward to seeing the employment numbers at 8:30 this morning.

Here's how economists and others reacted to the jobs report on Twitter:

April revised down a tad, March revised upa bit, and so revisions add another +15k.

Unemployment down again to 3.8%.

The economy keeps on keeping on. A 9-year recovery continues, and it's now in a pretty good place.

Another strong jobs report! Unemp down to 3.8% (and, at 3.75, just missed 3.7); black unemp to all time low of 5.9% (full emp helps minorities!). Upside surprise on jobs. Even a small wage pop for non-supervisory workers, but that's still a weak point.

The unemployment rate is now *lower* than during the dotcom boom, though the labor force participation rate remains considerably lower than it was back then.

So much for the "retail apocalypse." Retailers add 30k jobs, fifth straight month of growth. pic.twitter.com/n0zLDjX8ym

Not unusual, but a pretty clean illustration of how the modern economy works in today's jobs numbers

ICYMI, Here's a summary of todays #jobsreport: The jobs numbers are good, BUT WAGES ARE NOT. pic.twitter.com/zh5mT2OO4u

Unemployment rates remain much higher for black and Hispanic workers than for white workers, but black workers saw a precipitous fall in their unemployment rate in May. Only time will tell whether that's a statistical anomaly or a promising trend. pic.twitter.com/x9Xr5JKVVV

“You’re supposed to tweet about the jobs numbers AFTER they come out!” pic.twitter.com/yMe63tJpOu