Many companies believe that in order to close the gender gap one must achieve pay equity — which is when employees are compensated fairly and consistently across the board.

But CREW’s latest study, Achieving Pay Parity In Commercial Real Estate, suggests employers must take it a step further by pursuing pay parity, which is when a firm can prove there is no pay gap throughout its workforce, no matter employees’ race, gender and age. 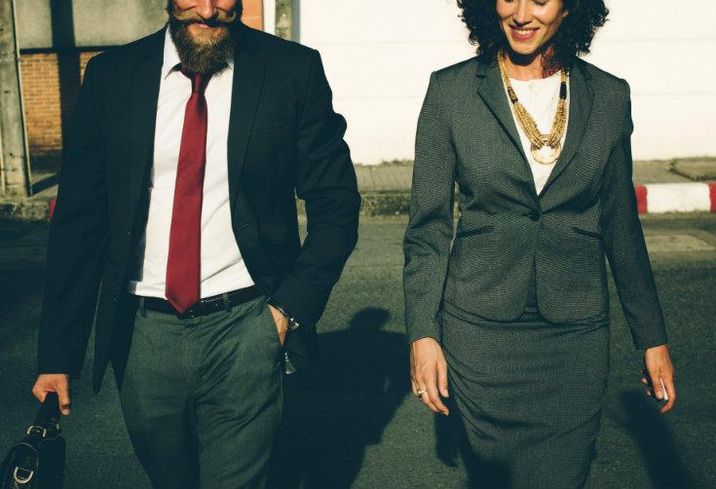 “I think that most people hear pay equity and they think ‘equal pay.’ But the end goal is parity,” CREW CEO Wendy Mann said. “It’s not ‘I’m a woman and I’m doing this job so I get whatever he’s making.’ It takes into account other factors such as education, work experience and tenure … Pay equity is the means to achieve the goal of pay parity.”

Wells Fargo is one company working to close the gender gap by achieving pay parity, according to the report. The banking giant conducts a pay equity analysis of its U.S. employees (who account for 93% of its workforce) at the end of each year to ensure its entire staff is being paid fair wages no matter their race, age or gender. To do so the company takes into account factors including role, tenure and geography. As a result of its annual tests, Wells Fargo announced in 2018 that its U.S.-based female employees are paid 99 cents on the dollar compared to their male counterparts.

“Using Wells Fargo as an example — cultivate and nurture a diverse workforce, creating the environment where everyone is included and feel they can be along and successful. That’s inclusiveness, that’s belongingness,” Mann said. “Understand that pay equity is an ongoing process — engage an expert or consultant who can help you through the process and [with] ongoing systems to help you monitor.”

CREW, which stands for Commercial Real Estate Women Network, has been chronicling initiatives, delivering data and providing action steps to advance women in the industry through its annual white papers and five-year benchmark studies.

In 2015, CREW’s latest benchmark study revealed that a wide pay gap of 23.3% existed between men and women in the industry, with female professionals making an average $115K in annual compensation compared to $150K made by their male counterparts. Mann told Bisnow that since 2015, generally speaking women in both the public and private sectors of real estate have seen an uptick in representation in C-suite roles, thanks largely to broad societal movements.

“Actually the movements aren’t within the commercial real estate industry. There are wider societal movements that were cited [in the report] that have been going on. Like the Time’s Up Movement in Hollywood, which was really focused on equal pay … it’s really called attention to the inequality for women and men overall in all industries in all aspects of our society,” Mann said. “It’s been elevated because of these large, broader social movements that are happening.”

In commercial real estate, the size of the gender gap for both female pay and representation tends to widen the higher up you move through the ranks. One factor that continues to exacerbate this gender divide is what is known as the “aspiration gap” — when women withhold from even aiming for certain positions, taking themselves out of the running completely.

For example, while 40% of men aspire to one day attain C-suite roles, only 28% of women say they do, according to CREW’s latest benchmark study. Nearly 50% of women respondents suggested their aspiration capped at the senior vice president or partner level.

Mann attributes this divide in career aspirations to the work environment and culture that a company, and industry, creates. 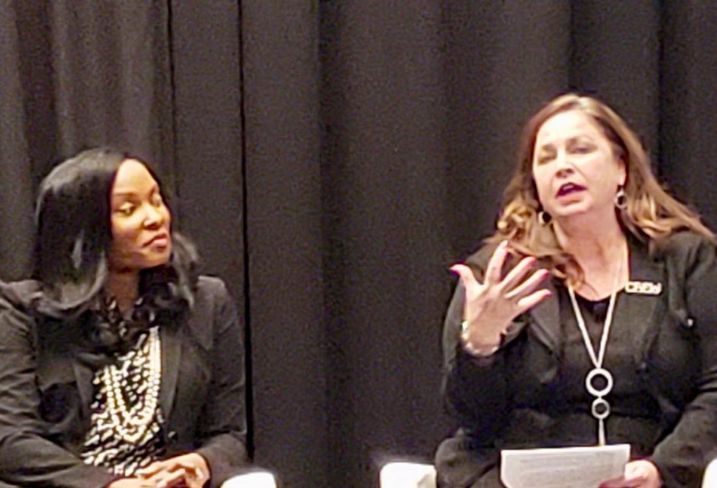 “When we ask what makes women aspire less frequently to the C-suite they said it was two primary reasons,” Mann said. “The first reason is that their home life won’t support it. There’s nothing we as business people can do to fix that. The other issue — that the work environment won’t support it — that’s a culture issue. That is something that companies can definitely address to create an environment where women and men feel equally that they can succeed and both aspire to greater roles … The aspiration gap is about creating an environment that is not just inclusive, but that recognizes and values all different kinds of work styles and contributions.”

One area in commercial real estate where women are increasingly pushing against the glass ceiling is the financial services segment. Women account for 34% of all jobs in that real estate sector,  making it the second-largest specialization behind asset management and ahead of development and brokerage services, CREW reports. Steps are being taken through various recruiting initiatives and networking events to make what has historically been a white, male-dominated industry more inclusive.

Bisnow spoke with 15 female commercial real estate finance executives about their experience in that space and what the industry is doing to diversify the ranks and close the gender gap. All respondents agreed that more work is needed to truly create a diverse and inclusive industry across the board.

“In order to bring more women into finance, there have to be efforts starting at an early age. By the time young women get to college, it’s too late,” Wells Fargo Head of Commercial Real Estate Capital Markets and Finance Kara McShane said. “If we educate girls beginning in elementary and middle school in a way that encourages an interest in math and science, and we foster confidence that they can succeed in those fields, we’ll have more young women majoring in finance in college and then pursuing careers in the field.”

That said, many remarked on the strides the industry has made thus far.

“I do see some progress,” CIM Group Managing Director and First Vice President of Investments Sondra Wenger said. “I recently had a transaction, which was the first in my career, where women were involved in all aspects: the buyer (me), the seller and the broker. Even better, it was a large $520M transaction in New York. This may go unnoticed, but for me it was special because in my entire career I have never had this experience.”

To achieve pay parity as a means to closing the gender gap, CREW recommends a number of best practices, including:

1. Get CEOs and C-suite execs on board to achieve pay parity and ensure all employees are compensated equally. To be successful, it must start at the top of the organization.

2. Cultivate and nurture a diverse workforce to attain a reputation for inclusivity and retain a diverse staff. This can be achieved by creating programs and putting networking and advocacy groups in place to help train and develop teams.

3. Institute company-wide training to limit unconscious bias, which occurs when individuals instinctively lump people into a certain obvious category and make assumptions based on those biases.

4. Put in place ongoing pay parity systems and processes to monitor pay equity and hold the firm accountable. This should occur on an annual basis.

"Clearly it’s a moment in time for women and I think that’s important for us as an industry to pay attention to,” Mann said. "The ultimate goal for our industry and everything driving this is that at the end of the day, our clients — the clients that people work with and the business partners they have — are more diverse than ever. They’re going to want to work with people who are more diverse."

CORRECTION, OCT. 25, 10:54 A.M. ET:  A previous version of this story misstated the pay gap between men and women in commercial real estate. Women make an average $115K in annual compensation compared to $150K made by their male counterparts. This story has been updated.