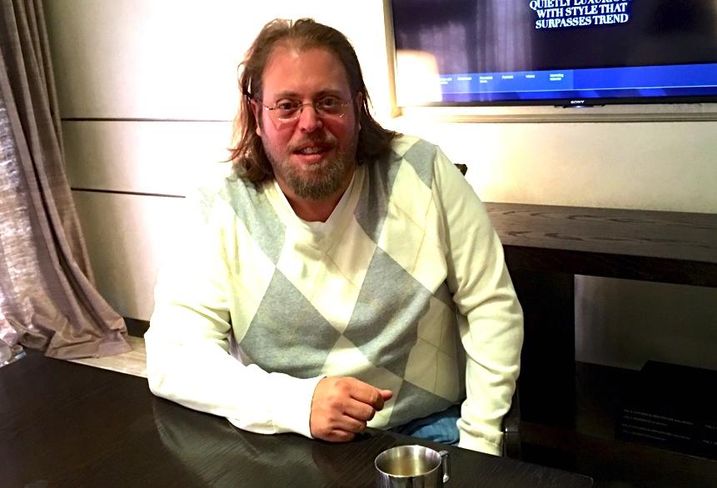 He’s a close partner of them all. We snapped him yesterday at the sales center of Dezer Development’s Residences by Armani/Casa, 56 stories of condos in Sunny Isles that just broke ground last week—a partnership among Gil, Related Group, Pelli and Armani. This follows on the heels of his partnership with Porsche Design in building the $560M, 60-story Porsche Design Tower, and his and his dad’s long partnership with Trump in building six luxury towers. 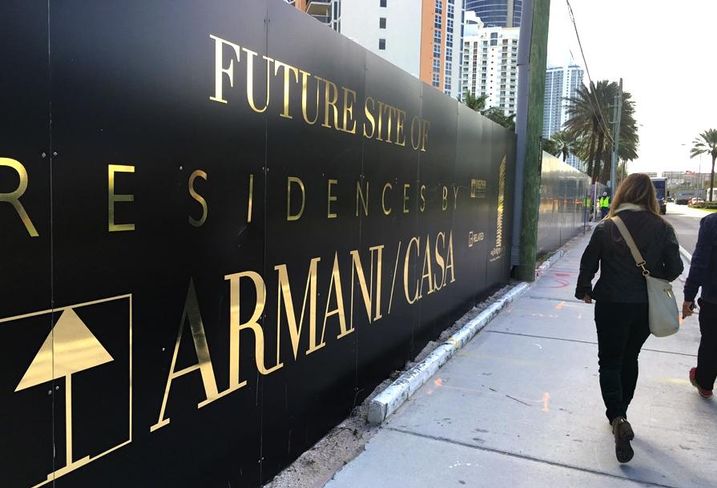 It’s commonplace to say that Gil, 40, and his dad Michael, 75, redefined Sunny Isles and luxury in Miami. It’s true. But what is perhaps not as appreciated is how Gil’s taken it to an all-new level: He’s redefining real estate branding. Previously condo developers would attempt branding themselves. Now he’s showing you can use other people’s top brands, even some entirely unconnected to real estate. “Porsche was the shot heard around the world,” Gil says. “All the brands are coming to me now,” mentioning the fashion, auto and glass industries, among others. It’s clear Gil is thinking of picking some more partners. 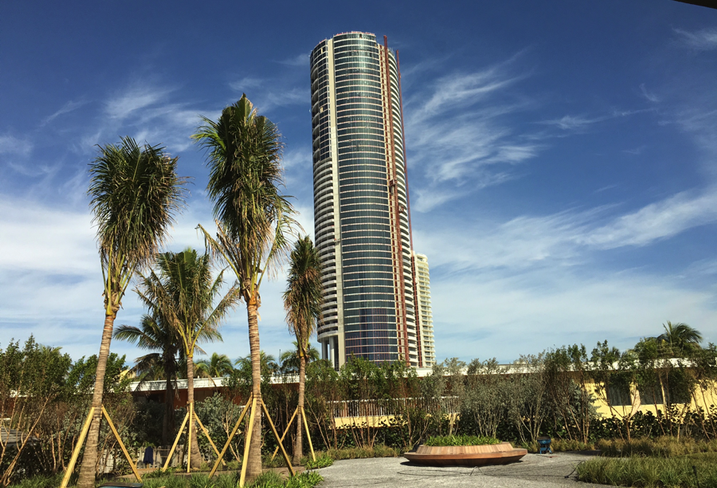 What he’s accomplishing is far from easy. Armani and Porsche are among the coolest and most valuable brands in the world. They are exceedingly careful in who they partner with. But the Dezer experience with the Trump developments evidently convinced Porsche—not to mention that Michael may be America’s most awesome car collector (see below). The Porsche Design Tower (which we snapped yesterday, six months from delivery) will have carports adjacent to every unit so you can step into your wheels (no doubt they will often be a Porsche), and plunge pools on every balcony. 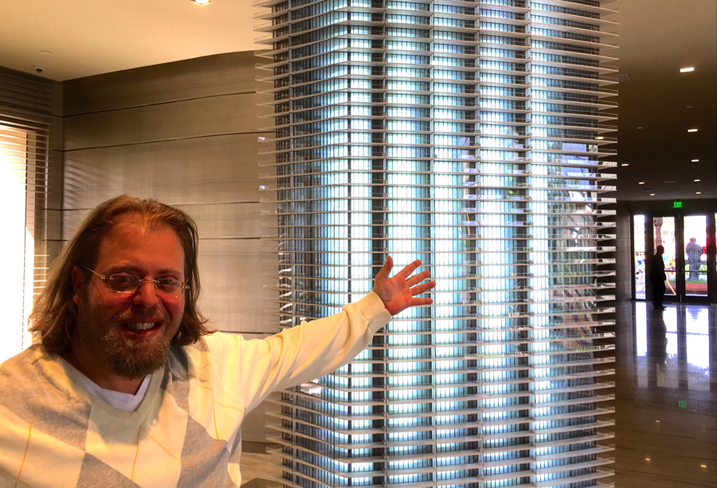 He thought of Armani Casa, Armani’s furniture line, when staying at Burj Kahlifa in Dubai, which features its pieces. And Argentine Cesar Pelli seemed a natural for Latin American-influenced Miami and because, like Armani, he represents the high style the Dezers aspire to in Sunny Isles. On the exterior, Pelli has employed curved lines and created a twist and widening as the building rises (to maximize ocean views besides looking pretty)… 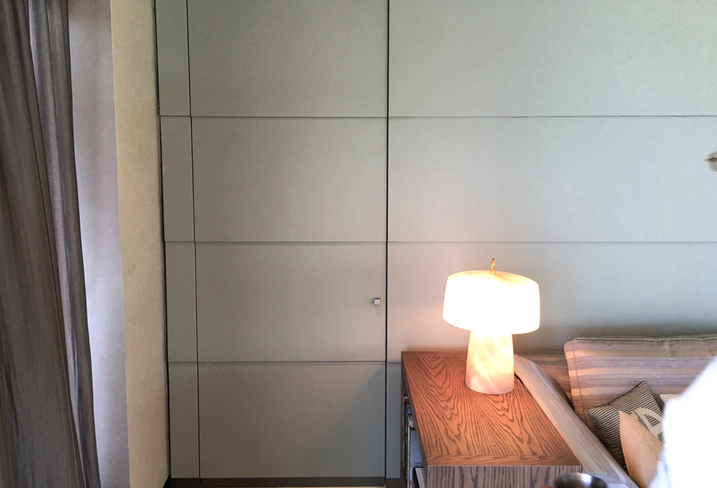 ...and inside Armani has used aqua colors and the sleekest modern lines, including all “flush doors” (i.e., no door casings or moldings). 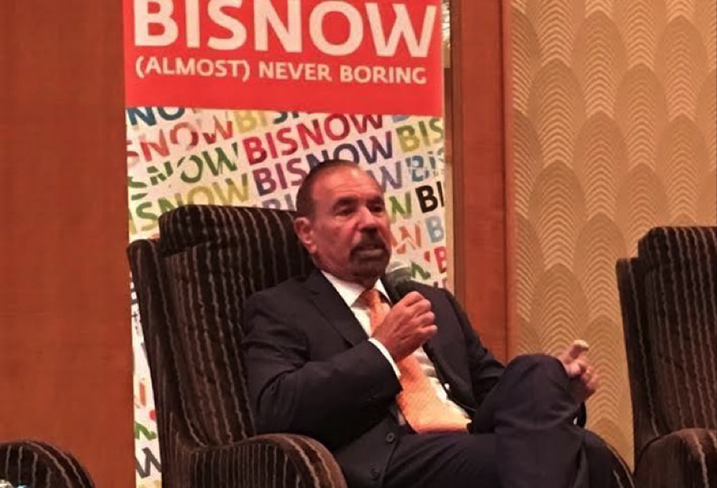 Dezer also partnered with Related Florida (CEO Jorge Perez last month at a Bisnow event) on the financing and development of the Armani project. From a previous negotiation, Dezer had a right of first refusal on the land and discovered that Related was also looking at it, so they talked and decided to collaborate. For hotel management, Dezer will use its own Forbes 4-star team from Trump International, and eventually may hire more managers from the best firms and create its own management division. 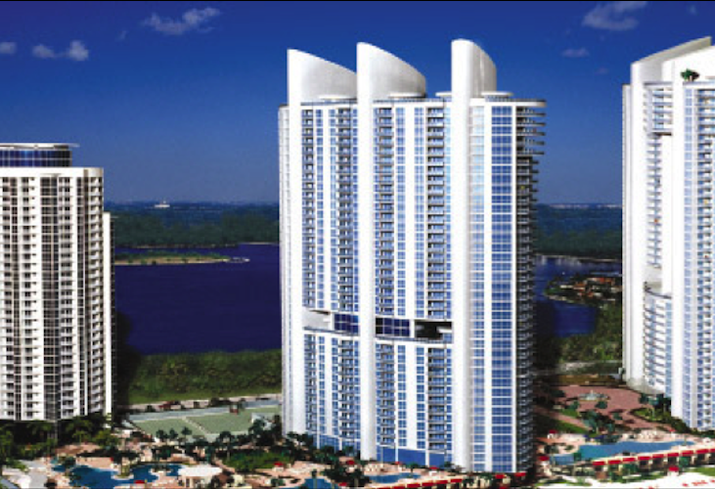 It’s been 20 years since Michael came down from NYC, where he is Chelsea’s biggest office owner (27 buildings, no mortgages), and discovered Sunny Isles, then a several mile stretch of seedy and/or kitschy motels. He bought so many that at one time he was the largest hotel room operator in Florida. The Porsche tower is Dezer’s ninth building and Armani's tenth. Of 27 oceanfront acres they have 11 acres left, enough Gil estimates for four more buildings. 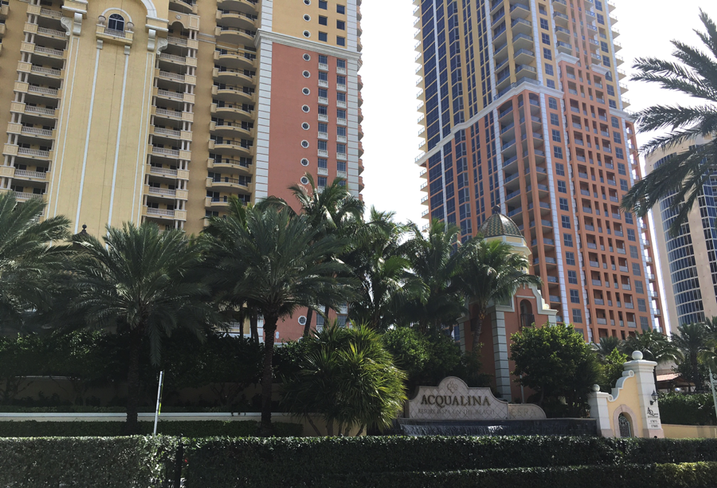 Others have joined in building similar flashy towers like Eddie and Jules Trump's (no relation to the candidate) Acqualina complexes, Edgardo Defortuna's Jades, and now Eduardo Constantini’s Oceana and Property Market Group’s Muse, among others. (Developer Manuel Grosskopf is building a 12-story Fendi Chateau in nearby Surfside.) Today Sunny Isles, immediately north of Bal Harbour, has been dubbed the “Dubai of America.” 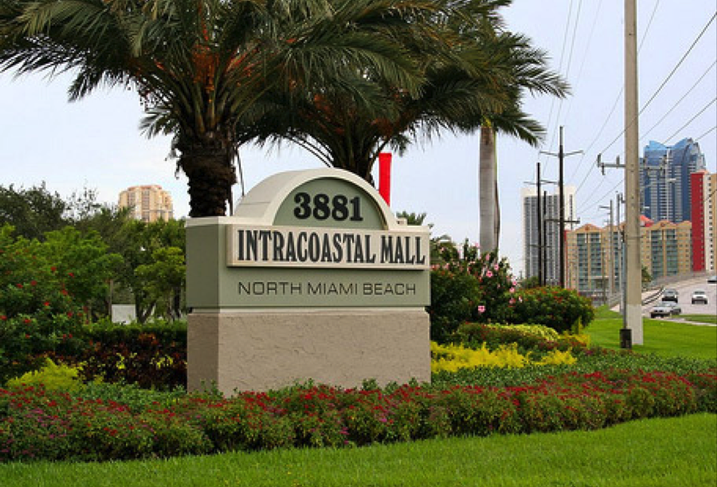 Whatever Dezer does next in the ultra-luxury category, Gil’s also thinking out of the box about an “affordable luxury” brand. One possibility is at the Intracoastal Mall the Dezers bought a year and a half ago across the bay in North Miami Beach, whose 27 acres would allow for eight buildings and 2,000 units. But that seems to be several years off. 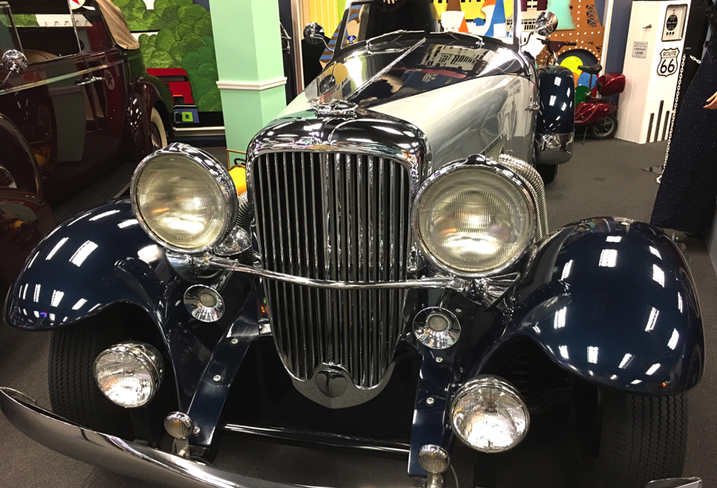 Describing the Dezers would be anything but complete without mentioning what may be Michael’s magnum opus—an 1,800 car collection he made into a public museum five years ago. Your publisher visited a few days ago, thinking it might be charming, but found it instead astonishing. If you have even the slightest interest in cars, you will be glad you went. Here’s a 1927 Dusenberg Model X, one of only four known to exist in the world. 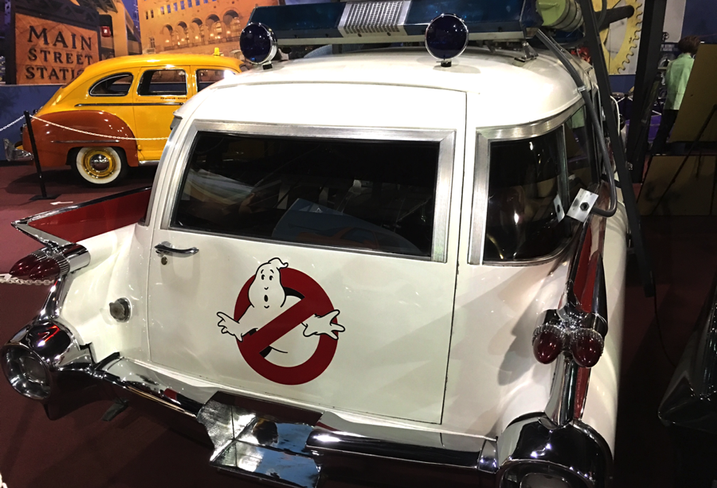 Besides every classic car imaginable, it has every famous car you can think of from the movies—Ghostbusters, Batman, Goldfinger, Chitty Chitty Bang Bang, Inspector Gadget, Back to the Future, Benjamin Buttons, Grease, Dukes of Hazard, Miami Vice, the Beverly Hillbillies, and on and on. Folks, in the course of your life, you may occasionally see something so striking, fun and priceless you say it “belongs in the Smithsonian.” This collection should have its own large Smithsonian building on the National Mall. You may need to see a doctor afterward because your jaw will be dropping so much. To boot, Gil’s dad selected the property well, at 146th and Biscayne, which is going through a revival, since the $4B SoLe Mia mixed-use mega-project is being built nearby. Whenever Michael laments that the admission fees don’t cover his costs, Gil reminds him that any money he’s losing on the museum is more than being made up for by appreciation on the land. 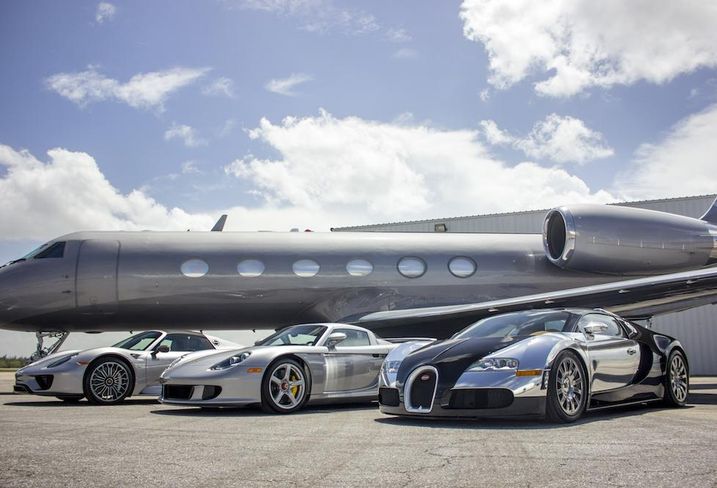 In his own life, Gil has lots of Porsches (such as a 911 Turbo S convertible for daily use). But of course his special love is his 918 Spyder. We won’t tell you the going price, but let’s just say he has to be careful where he parks it. In this picture, with his Bugatti, it appears to be safe. 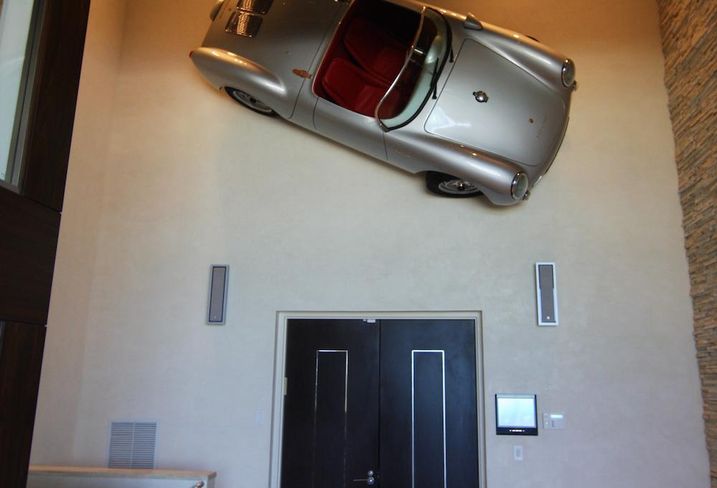 On the other hand, we can't vouch for the safety of this actual Spyder 550 that hangs on a wall in Gil’s home.

Conveyance he came on to meet us yesterday: Segue.
Favorite song: Billy Joel’s Piano Man; has been to his concerts 4-5 times.
Movie: Whatever he sees at the iPic they opened at the Intracoastal Mall. A recent movie he loved was Wolf of Wall Street.
Favorite vacation: W Hotel Maldives in the Indian Ocean; has been there several times: “I love the disconnect.”
Boat: 84 foot Sunseeker, going to Bahamas with it next month. “When your main home is in Miami, what do you do for a second home? A boat!” he says. (Although also has a place at Fifth and 20th in Chelsea.)
Favorite Restaurant: Il Gabbiano, downtown Miami
Go to joint: Houston’s in Aventura
Favorite snack food: Red Twizzlers. (Editor’s Note: He is only partially correct. Red licorice is the best. But Red Vines are better than Twizzlers.)
Next birthday: March 1.
Startling fact: Flies radio controlled airplanes and drones. Watch out!