Prayers Answered At St Michaels: So Will Neville And His Partners Now Sell It On? 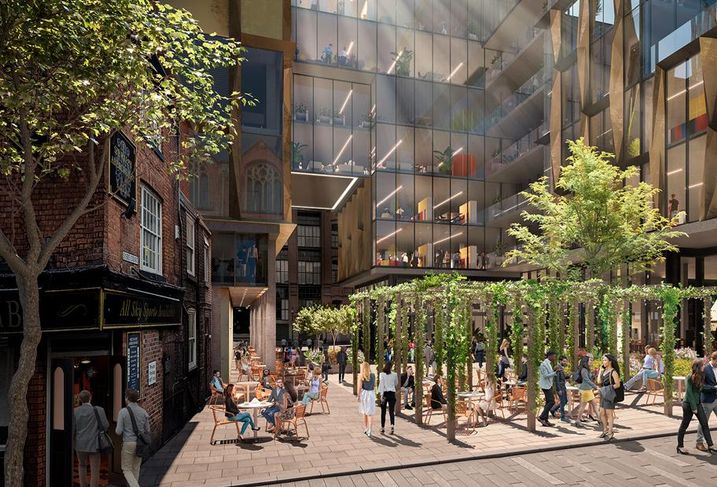 Great bunch of lads, back of the net … The £200M St Michael’s development in central Manchester fronted by former Manchester United stars Gary Neville and Ryan Giggs, will not be called in for determination by the government, and has therefore secured planning consent.

Speaking on behalf of the St Michael’s Partnership Gary Neville used the traditional language of the post-match press conference to confide he was “excited” to have received the green light. He went on to add that he was “delighted.” Giggs, now Wales national coach, said he thought the scheme was “brilliant.”

The approval comes after more than a decade of controversy over the site close to Manchester Town Hall, whose setting protesters claimed was at risk thanks to the scheme. A fightback also saved city centre boozer the Sir Ralph Abercromby from demolition, and it is now incorporated into the development at Jacksons Row.

A public square will also feature, in front of the refurbished Sir Ralph Abercromby pub and a new synagogue will be built nearby.

St Michael’s is to include an unnamed international luxury five-star hotel featuring 216 bedrooms and 189 high-end apartments in a tower reaching 39 storeys.

There will also be 148K SF of office space, 33K SF of leisure space — including an outdoor rooftop terrace and a boutique five-star hotel in the former Bootle Street police station, which will retain its frontage.

The task now is to make the scheme work — or to sell it on, in whole or in part — at a time when the U.K. economy enters an uncertain period. Neville has previously said work on site will begin in 2019.

Bisnow asked if further funding partners were being sought, or if the St Michaels Partnership planned to sell on the scheme with the benefit of planning permission, either in whole or in part, but they declined to comment.

The St Michaels Partnership is formed by Beijing Construction Engineering Group working in close partnership with Singapore-based Rowsley — who have worked with Giggs and Neville on two other Manchester hotels — and The Jackson’s Row Development Partnership (owned by Gary Neville, Ryan Giggs and Brendan Flood). BCEG owns a 21% stake in the £200M regeneration scheme, according to its website.