CRE Experts Explain Why U.S. Tech Is Lagging Behind China

With a simple finger-tap on a single app on their smartphones, most of the young professionals in China could find a ride-share service, order a pizza, make a payment or even book a karaoke session.

In the U.S., people still have to go through several apps and link different payments to do the same thing. There is no one simple way to streamline the process, Gaw Capital Partners Senior Vice President of Capital Markets Mike Hu said.

“A lot of my colleagues in China do not even carry cash,” Hu said after Bisnow’s LA Capital Markets and Foreign Investment event Feb. 28 at the JW Marriott in downtown Los Angeles.

“In China, everything is paid for by using their phones or one app,” said Hu, whose company has a portfolio that spans worldwide. “Just imagine Apple Pay but with 99% of the population using it.”

When it comes to implementing technology such as bitcoin and blockchain and making life easier for their tenants or visitors, commercial real estate leaders say the CRE industry in the U.S. still lags far behind its Asian rivals.

“I feel like our industry hasn’t really been fundamentally changed by tech like so many other industries have,” Fuhrman said. “A lot of our business is much the same as it was 10 to 20 years ago.”

Panelists said the rapid improvements in technology could better influence how developers shape their buildings and what amenities they offer to visitors or tenants.

In China, for example, Tencent’s WeChat and Alibaba’s Alipay could purchase most everything. From major hotels and restaurants to taxicabs and street vendors, most retailers accept smartphone payments. Carrying cash is almost nonexistent.

But most developers in the U.S. are still trying to meet the demands of the millennial generation.

“The millennial generation — some don’t even have cars,” K2 Clean Energy Capital’s Pickering said. “The needs of millennials, and what to expect in terms of experience where they want to live and transportation, is different now than it was 10–15 years ago and developers need to be on board.”

Fuhrman said his company’s project in Mountain View near the Google campus is looking into offering ride-share credits with Uber or Lyft. He is also looking into creating a parking elevator where someone could just pull in and let the machine park the car.

While many of today’s CRE developments are driven by millennials, China is going beyond, Hu said.

There is one big catch.

It is pretty much a given that privacy in China is nonexistent, he said. Chinese citizens do not have an issue with their personal data being collected by companies and maybe even the government, Hu said.

“Whereas in the U.S., I think the jury is out," he said. "I don’t believe everyone in the U.S. is willing to give their privacy away because they are not sure if [technology] will make everything better.”

Check out more photos of the event from the slideshow below: 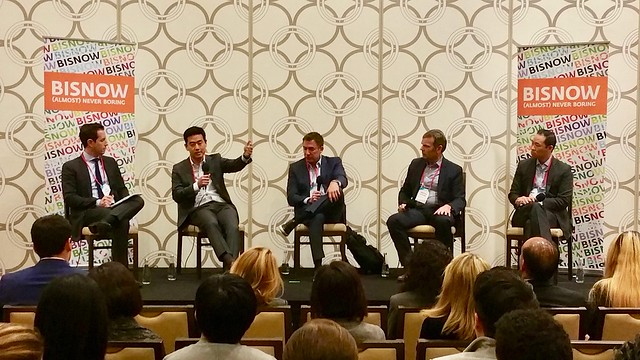