In Century City, A Focus On Amenities Attracts A New Generation Of Workers

The office landscape in Century City is changing.

Once known as a traditional professional office hub — a place where suits and ties were the norm and tenants such as investment banks, law firms and real estate companies rented out compartmentalized office space — a new breed of tenants is ditching the formal business wear and setting up shop in newly designed office suites in Century City, experts said at Bisnow’s Neighborhood Series: Century City & Beverly Hills event Tuesday at the Beverly Hilton.

“There is a transformation going on,” Century City Chamber of Commerce President and CEO Nancy Wood said. “We’re seeing a lot more amenities and these firms are listening to their employees. There’s a lot more play and millennial-oriented activities.”

Much like other retail industries across the nation, the retail shops that line Rodeo Drive and other streets in Beverly Hills have been struggling and facing high vacancies, JLL Senior Vice President, Retail Houman Mahboubi said.

Kennedy Wilson’s Mike Gillman cautioned investors that Beverly Hills is not the ideal place to “flip and make a quick buck.”

“If you want to invest in Beverly Hills, you have to be here for the long haul,” Gillman said.

Century City is undergoing a renaissance with the $1B renovation of Westfield Century City Mall and the under-construction Metro Purple line making the area an attractive location.

It is also experiencing a spillover effect from nearby Silicon Beach — Playa Vista, Santa Monica and Venice. As demand and office prices go up in those areas, creative tenants are coming to Century City and West Los Angeles.

LA Realty Partners' St. John said she and other brokers are slowly seeing the influx of creative tenants.

She points out several examples, including co-working giant WeWork renting out a whole floor and expanding at 10250 Constellation Blvd. Earlier this month, flexible workspace provider Industrious signed a lease at the Watt Cos.' Watt Plaza.

Regus at Avenue of the Stars, she said, is now “metamorphosing to sound cooler and hipper.”

“Even the traditional service companies like the law firms, we are seeing polished floors [and] open ceilings,” she said. “They want to attract millennials. And to be able to do that, you can’t do it with the old formula anymore.”

McRoskey, the CBRE managing director, said more office properties are renovating in an effort to lure a new generation of tenants.

The Century Plaza Towers is undergoing a $110M renovation that includes redoing every bathroom in both towers and a 15K SF fitness center for tenants, he said.

“People are putting a lot of money into this market because of where the market is going,” he said. “We are very bullish on what is happening.”

McRoskey said this is all part of landlords listening and adapting to new tenants and a different kind of workforce.

“People are working differently now,” McRoskey said. “In my era, people worked behind their desk and didn’t get out until it was time to go and that was it. Tenants didn’t socialize with other tenants. That doesn’t happen anymore.”

He said tenants want to get out of the office and work outside or at a coffee shop. Every day, he sees people fill the outdoor plaza at Century Park either working, listening to music or just enjoying the day.

“If you have a happy tenant, that tenant is going to renew,” he said. “We can’t afford to lose any tenants. The more amenities that you have, the more things you can hook them with, the better off you will be.”

Check out a photo slideshow from the event here: 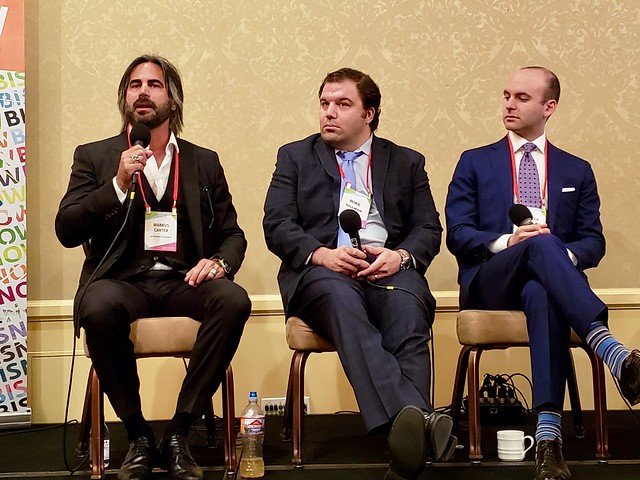