People are moving in. Tech companies are setting up headquarters. Office leasing, occupancy rates and rent growth are up. And more developments are planned.

Looking back, commercial real estate experts credit the opening of a grocery store on Ninth Street a little more than a decade ago as one of the main reasons for downtown’s revitalization.

“The biggest addition to downtown was Ralphs,” OUE Limited Senior Vice President of Leasing Peter Johnston said. “We had residential growing but they had nowhere to go shopping.

“Ralphs was huge — much bigger than what some people realize — to promote downtown residential life,” Johnston said.

Johnston along with other real estate experts spoke about the revitalization of downtown during Bisnow's Los Angeles Creative Office & Design Trends event Jan. 17 at the U.S. Bank Tower in downtown Los Angeles.

After a commercial real estate boom in the late 1980s and early 1990s that added several office buildings to downtown, a short recession, coupled with corporate restructuring by major companies and corporate office spaces opening in nearby suburbs led to downtown’s decline.

Low rents and high vacancy rates led to foreclosures, according to reports during that time.

But in 1999 things began to change. Staples Center — the home of the Los Angeles Lakers and Clippers NBA basketball teams — opened, and later that year the city passed the Adaptive Reuse Ordinance. Developers were able to convert run-down office buildings into apartments or condominiums.

Downtown residents, though, still had to drive 20 to 30 minutes out of their homes to go to a grocery store, Rising said.

So when Ralphs announced it was opening a location in downtown, it was widely embraced. Ralphs was the first major supermarket chain in downtown in more than 50 years. When it opened in July 2007, more than 1,000 local residents waited in line.

“Downtown’s phenomenal growth in the last 15 years was spurred by a housing boom that coincided with the opening of Staples Center. The opening of Ralphs was a reflection of the success of that housing boom and was a game changer for DTLA,” Downtown Center Business Improvement District President and CEO Carol Schatz said after the event.

Rising said the addition of Ralphs changed downtown LA. Especially now, as millenials and residents who work in the area are ditching their cars and want to live closer to work.

In turn, commercial property owners and managers are creating a new look and redesigning downtown offices to lure young tech or media startups.

Johnston of OUE said it is the residential life that is pushing downtown into a new frontier.

“It’s that vibrancy of residential that drives what’s cool and where you want to be,” Rising said. 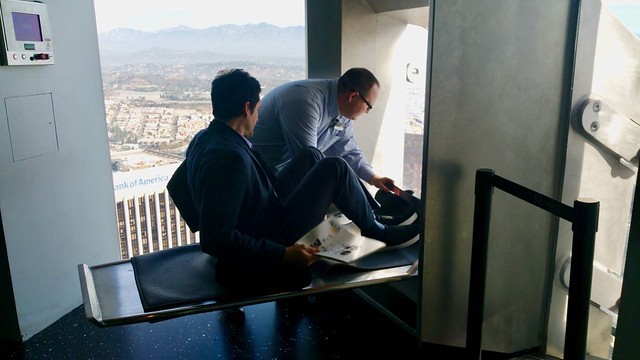