When visitors walk into the EY office in downtown Los Angeles, they know they are in Los Angeles.

Once visitors walk out of the elevator, each floor has backlit images of palm trees or architectural elements unique to Los Angeles.

One hallway resembles walking on the Venice Beach boardwalk. Iconic images of Los Angeles, including the Watts Tower, the Ferris Wheel in Santa Monica, the Great Western Forum, the Griffith Park observatory and other landmarks, decorate some of the walls in an open-office layout. 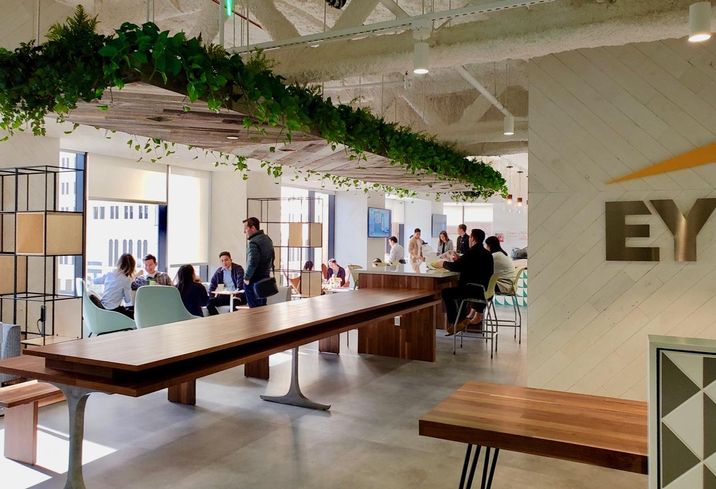 The desks allow workers to sit or stand. Other workstations allow employees to plug in and move around. There are tables by the windows overlooking Staples Center and sofas inside glass offices.

A breakroom has faux moss on a wall and is decorated like a smaller version of the Hollywood Bowl. Another hub was inspired by the popular Abbot Kinney block.

"Most people would be surprised a professional services firm would have an office like this," EY Managing Partner Patrick Niemann said as he walked through the new office. "It's just better and healthier. Overall, it just feels better."

The days of compartmentalized office space, cubicles with high walls and large executive corner suites appear to be over.

The interior transformation of EY's Los Angeles headquarters is part of a much broader vision for the company and an ongoing trend by professional services firms to adapt to a changing workplace environment.

Downtown LA is seeing an influx of creative offices. The changing downtown and DTLA's office market will be part of the discussion at Bisnow's The Future of Downtown Los Angeles event March 26.

Worldwide, law firms to accounting firms are changing their look and investing millions to accommodate a new generation of workers.

"Even beyond the millennials to the Gen Zs, they are the ones entering the [job] market," she said. "These new workers are 21- to 22-year-olds, graduating from college and are coming in having grown up very differently than the millennials and nevermind Gen Xers. It's about bridging the generations. It's a generational shift and the pace that we work in now requires us to be able to communicate and collaborate even more quickly and be able to put our heads down and get our work done." 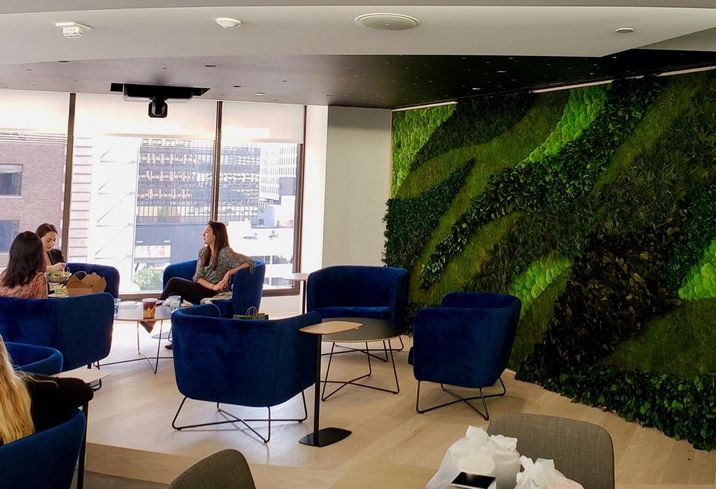 MacArthur said EY wanted to push the boundaries with its new look and go beyond trends.

The renovation of EY's Los Angeles office is part of the company's EY@Work initiative. This is the third and largest office on the West Coast that EY is renovating. The company has also transformed its Salt Lake City and San Diego offices with this new look. It has already introduced the concept in other EY locations on the East Coast. The company plans to renovate more of its offices like this worldwide.

So far the company has completed renovations on three of the five floors of its Los Angeles office.

"Our vision is to have the most productive, flexible workspace that is responsive to all of our people who may very well have different work styles and preferences that are most productive for them," Niemann said.

Niemann did not disclose the cost of the renovations.

Before renovating the space, Niemann said a committee polled workers about what they wanted in an office space. About 70% of the company's Los Angeles workforce are millennials, Niemann said.

"We wanted to create an environment that would enable us to continue to grow and attract top local talent."

A majority of those surveyed employees said they wanted a new office environment that allowed them to collaborate better and be more productive, according to EY officials. 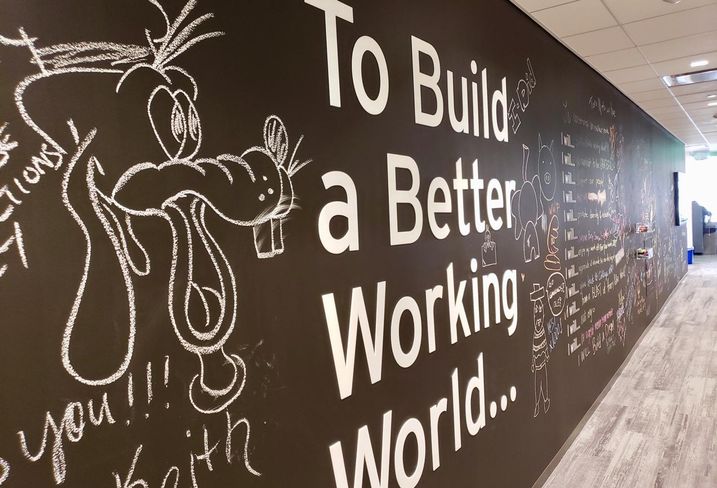 Since the program started, employees’ satisfaction with the work environment has increased on average from 68% to 80% in EY@Work locations, officials said.

Employees congregate in the many glass-enclosed offices. Some sit on sofas with a nearby laptop. Others chat and take a break at the hubs.

There is even a game room.

The new look is a far cry from when Niemann first started in 1991. It wasn't as inviting, he said.

"I was in a large room which had 20 cubicles with other first- and second-year employees and no window view," Niemann said. "I remember the partner offices were so much larger with the big mahogony desk, large rug, maybe even a sofa and at that time that was viewed as important for different reasons: It was a sign of accomplishment and seniority, and as a newer less-tenured person, it was easy to look at that, that if I'm successful, I will have that.

"But what we found evolving over time is that is not what is most important to our people," he said. "From the less-tenured or college grads or even our most senior executives, it's much more important to be productive and be able to serve our clients and be able to come to an office and get to work and leverage the best technology."

Neimann said the younger workers have thanked him for the new design and so have the senior executives.

"We've seen countless benefits," he said. "We have seen an increase in people coming to our offices more than our old space."

Niemann recalls one senior partner who has been frequenting the office more often.

"He doesn't need to come in here, but he is incentivized to come," Neimann said. "Having one of our most experienced people to be able to come in and mentor our people and glean their wisdom and experience to us — again they can work anywhere they want but they are choosing to come into the office. That is very positive."