Greenland USA said the company completed its fourth and final tower, the Thea at Metropolis, earlier this week.

The company broke ground on the billion-dollar, 3.5M SF development, which sits a few blocks from LA Live and the Staples Center, in 2014, and completed two other residential towers and a boutique hotel at the site within the past five years. 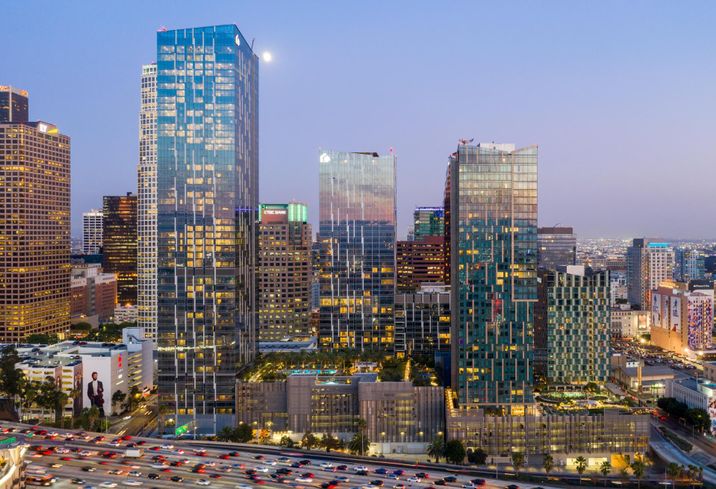 “Delivery of Metropolis’s final residential tower is an incredible achievement and a testament to Greenland’s commitment to Los Angeles,” Greenland USA General Manager Winston Yan said in a statement. “We are proud to be the first Chinese developer to deliver a program of this scale in the United States."

Greenland did not reply to a Bisnow request for additional comment.

The completion of the Metropolis on 6.4 acres in the Historic Core neighborhood of Downtown comes as other projects from China-based developers have stalled.

Construction on Oceanwide Holdings' Oceanwide Plaza in Los Angeles and Oceanwide Center in San Francisco have stopped due to mounting construction liens and are now reportedly for sale, according to several reports.

After four years in escrow, an affiliate of Shanghai-based Sheng-Long Group finally completed its $120M acquisition of a parcel across the street from LA Live for the development of Olympia, but it is unclear when and if that will ever start construction.

Though finally complete, Greenland's Metropolis has faced its own struggles as it headed toward the finish line.

When the company acquired the vacant parking lot site for $150M and began construction in 2014, the market seemed to be prime for a brand-new luxury offering to complement the growing Downtown area.

Greenland Group was a well-known developer in China and Metropolis was supposed to be their grand entrance into the U.S. market. But a slow and declining condo market and tightening controls from the Chinese government forced Greenland USA to place two of its four towers at the Metropolis for sale.

Greenland USA had reportedly tried to sell the 350-room Hotel Indigo for $280M last year. The Metropolis Tower II, a 514-unit residential for-sale condo tower, was also reportedly for sale for $450M, according to reports. The Real Deal, citing public filings, found that Greenland USA spent $1.26B on the development.

There were no takers, and both properties are currently off the market.

Unlike its other two residential towers, which are composed of for-sale condominiums, the Thea, a 56-story, 685-unit building, is for lease. The shift from an available sale to rental building is a sign of the shifting demands in Downtown Los Angeles, where the landscape for such developments has changed.

The Real Deal reported both for-sale condo towers at Metropolis have been experiencing sluggish sales. According to its statement, Greenland USA is looking for tenants to occupy the retail portions, totaling 70K SF in the Hotel Indigo and three residential towers.