New Tech Tackles Worker Safety, But Hotels Have Been Slow To Adopt It

How did she know? Because recently, a man had pushed a housekeeper into a guest’s hotel room, Batra said, and she believed she was about to be assaulted. Equipped with a Traknprotect safety button, the housekeeper immediately used the device to call for help.

Bisnow/Joseph Pimentel
Traknprotect's Parminder Batra shows how an incident report could be created after pressing a panic button.

The assailant was caught and the housekeeper was physically unharmed. But for Batra, it was a stark example of the importance of equipping hotel personnel with a safety or panic button while on the job.

“She was cleaning and someone tried to take advantage of her,” Batra said to Bisnow after a panel at the annual the Americas Lodging Investment Summit in downtown Los Angeles. “These things do happen."

The incident highlights an ongoing issue nationwide in the hospitality industry. Hotel housekeepers, who are mostly female immigrants who often work alone and in a solitary environment, are especially vulnerable to harassment or attack.

With high-profile incidents like the alleged assault of a housekeeper by an international figurehead in New York in 2011 (criminal charges were dropped), and the rise of the #MeToo movement, women have been calling out aggressive male behavior in many industries, and the hospitality sector is no different. As part of that push, there has been growing pressure from legislators on hotel owners and managers to protect workers from guest harassment and to report other crimes and emergencies.

“We’ve had a deep problem in the hotel industry for a long time,” said Ada Briceño, co-president of Unite Here Local 11, a labor union in Los Angeles representing 30,000 hotel and other service industry workers.

A 2018 Unite Here report found that sexual harassment runs rampant in the hotel industry. Nine out of 10 hospitality staff surveyed in the report experienced sexual harassment at work, while eight out of 10 workers said they witnessed others being sexually harassed at work. More than half of the perpetrators were guests, and another 22% were harassed by a manager.

“For some reason, men, and mostly men, outside of their homes and who visit other places, like to expose themselves in front of people,” Briceño said. “Maybe it’s tied to the fact that these are women or immigrant women. Men exposing themselves is a recurring theme. In severe cases, there is harassment and assault.” 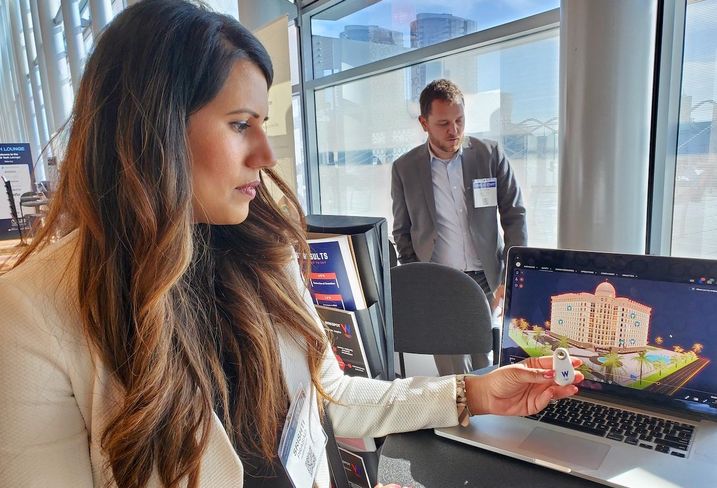 Bisnow/Joseph Pimentel
A Wrkspot employee holds up a panic button in front of a demonstration of the company's new software at the ALIS Conference at the JW Marriott in downtown Los Angeles.

Equipping hotel workers with panic buttons or emergency safety devices is part of a solution to the problem. Panic buttons are Bluetooth, wireless, GPS or some other tech-enabled devices about the size of a small key fob, that room attendants would place either in a pocket or on a lanyard around their neck. Some make an audible noise like a car alarm when pressed, while others are silent and notify a security guard or hotel management.

"Frankly, the technology wasn't there and reliable enough," Koch said. "Fifteen years ago, people were using radios or walkie-talkies. Now, we're at a tipping point."

At the ALIS Conference on Monday, three companies, including Chicago-based Traknprotect, demonstrated the new generation of panic buttons.

For Traknprotect's technology to work, a user needs to hold the button for at least three seconds. A hotel security official or management would then receive a continuous stream of real-time alerts either via text or email, pinpointing the exact location of the person in trouble, so security could check it out until it is turned off. Then, a report is automatically made on a mobile app or website.

“It is important to remember that incidents don’t just happen in hotel rooms,” Roczey said. “Things can happen inside a garage, a stairwell, storage room or basement. We have the only dead zone solution.”

Cerritos, California-based Wrkspot touts a 3D image software along with a panic button. The software shows an exact model of the hotel property, tracks employees and pinpoints problems and other issues happening in the hotel in real time. Wrkspot CEO Raja Epsilon said they’ve already piloted the program with 10 hotels. This year, he is under contract to install his program to 150 more.

Still, despite a widespread need, hotels have been slow to adopt these tools.

Combined, the three tech companies said they have fewer than 500 hotels nationwide contracted and using their devices. That number is low but expected to rise, Batra said, adding there are more than 50,000 hotels nationwide. Only 10% have given panic buttons to their employees, the American Hotel and Lodging Association's statistics found, and another 20,000, with 1.2 million employees total, will have panic buttons by the end of the year.

Price points may vary, but Koch said for a 300-room hotel, it is about $35K to $45K as an initial investment. The price changes depending on the size of the hotel and the number of rooms.

In the past three years, cities and states have passed laws requiring hotels to equip their employees with panic buttons.

In the aftermath of allegations against Dominique Strauss-Kahn, the former managing director of the International Monetary Fund who was accused of sexual assault in a New York hotel room, New York became the first city requiring union hotels in the city to have panic buttons. Last year, New Jersey passed a law that requires that hotels with 100 or more rooms provide the devices to their employees. Other cities such as Long Beach, California, Santa Monica, California, Chicago, Seattle, Miami and Washington, D.C., have all passed similar laws.

In 2018, in an effort to further promote safety and security, the AHLA, the advocacy group for the hotel industry, teamed up with major brands such as Marriott, Hyatt, Hilton, IHG and others for a new safety initiative including the deployment of panic buttons, identifying sexual harassment and training to identify human trafficking. A year later, the AHLA reported a 230% increase in members participating in the 5-Star Promise, from 17 companies to 56.

For Batra, she said the panic buttons are a start to something bigger.

"We are trying to promote a safety culture in hospitality," she said.