Jaguar: This Is How Electric Cars Could Reshape Real Estate 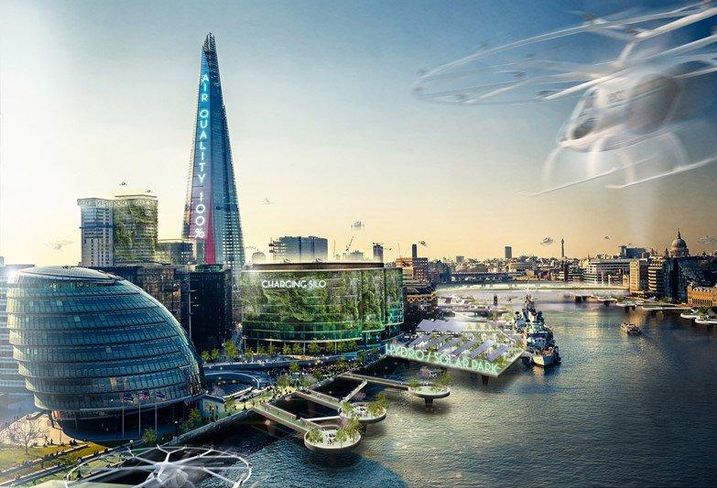 There is a lot of noise about the impact driverless cars might have on real estate — but electric cars could also fundamentally affect the sector, according to one of the world’s most famous automotive firms.

Car maker Jaguar has teamed up with architecture firm Barr Gazetas and come up with four ideas about how electric cars might influence the future of urban and more rural real estate.

“These four concepts should all be possible within a generation,” Barr Gazetas Managing Director John Eaglesham said. “Electric vehicle successes represent a huge catalyst for change.

“As architects, together with town planners and authorities national and local, we need to embrace this opportunity now, and bring visions such as these to reality, improving experiences, and indeed lives, up and down the country.”

The most utopian idea imagined by Jaguar and Barr Gazetas was the way in which electric vehicles could help to clean up and repurpose polluted cities.

Their example city, London, “is a cleaner, healthier city where repurposed, new infrastructure, connected to electric vehicles, has allowed a proliferation of vegetation and green space”.

Bringing post-industrial brownfield land back into use 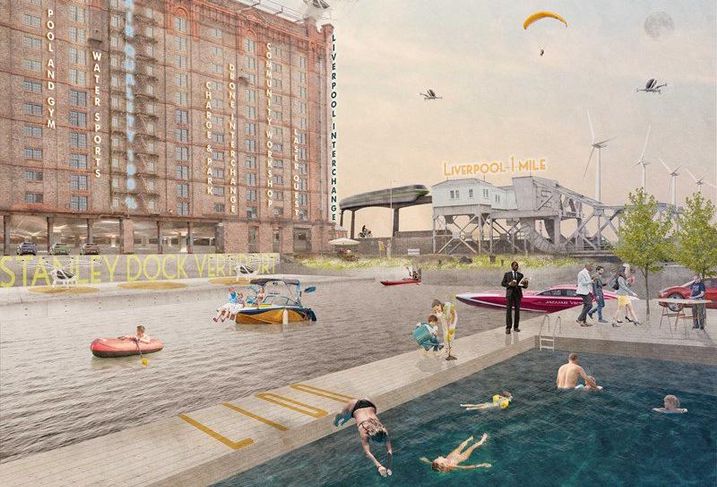 Courtesy of Jaguar and Barr Gazetas
Electric vehicles could bring disused land back into use.

The two firms imagined a future where city centres were car-free, and serviced by last-mile centres built on former industrial sites just outside towns, powered by solar energy.

They take Liverpool’s Stanley Dock as an example. Built in 1901, it was once the largest building in the world, but fell into disrepair in the 1980s, symbolising lost industry and economic difficulty.

It has been reimagined as a community interchange, helping to rejuvenate the city through the creation of new community facilities and industries based on green energy.

“Linked to the future of transport and car-free city centres, redundant brownfield sites like Stanley Dock can offer the multi-modal ‘last mile’ connection to cities, whilst rejuvenating the communities they are situated in,” Jaguar and Barr Gazetas said.

What to do with all those multi-storey car parks? 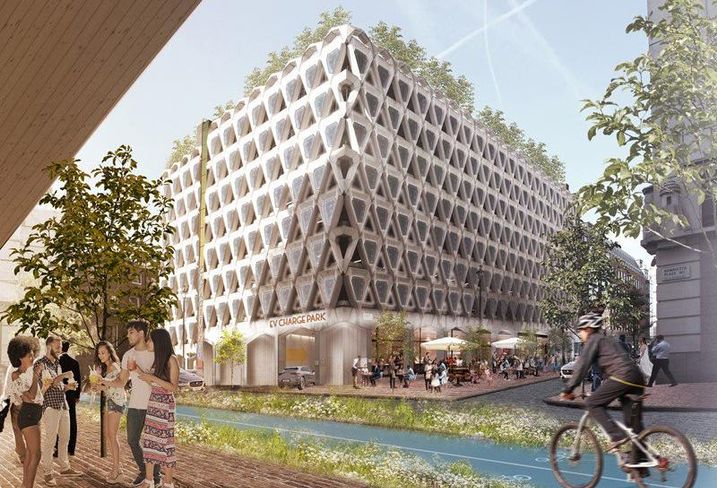 Driverless cars might make car parks obsolete, but if that doesn’t happen, they could be repurposed using the existing building structures to become solar-powered electric car charging stations.

“Re-imagined as a self-sufficient charging plaza, the proposal is to reinvent the existing stock of city centre multi-storey car parks, where owners of electric vehicles who are less likely to have access to off-street parking at their homes, can charge their cars adjacent to good public transport links,” Jaguar and Barr Gazetas said.

“The result is cleaner and greener surroundings and parts of the building freed up for retail and leisure use.”

Motorway service stations as somewhere you might want to stay 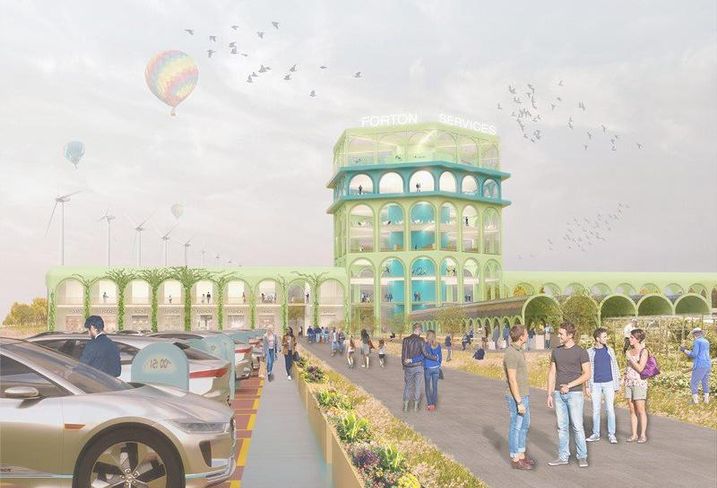 “Today motorway services are often an unpleasant jumble of commercial buildings servicing noisy, polluted motorways,” the two companies rightly say. But as electric cars reduce pollution, they have the possibility to become more pleasant and integrated into local communities.

“With electrification, much reduced noise and pollution together with increased ‘dwell time’, result in such stations becoming destinations with an array of amenities and services including farm shops, gymnasiums, swimming pools and restaurants to give travellers greater options to occupy the time required to charge their vehicles,” the two companies said.

“The trend towards connecting these stations to their local rural and urban community is enhanced by the environmental improvements electric cars will bring. Encouraging people to visit for a variety of reasons, be it for leisure, to work or to trade produce and ideas, they will revive the lost model of the ancient caravanserai [a roadside inn for travellers].”