The massive influx of refugees into Europe in the past two years has created challenges for societies across the continent — and real estate is at the front lines.

A handful of real estate projects and companies across Europe are looking to shelter and integrate refugees into communities. They range from the small and esoteric to large household names — one is backed by KKR and Morgan Stanley. They face huge challenges: entrenched views on migrants, a lack of existing structures and, most of all, the acute difficulties in building low-cost real estate.

But they are housing those in need, and changing the way people and societies interact with refugees. 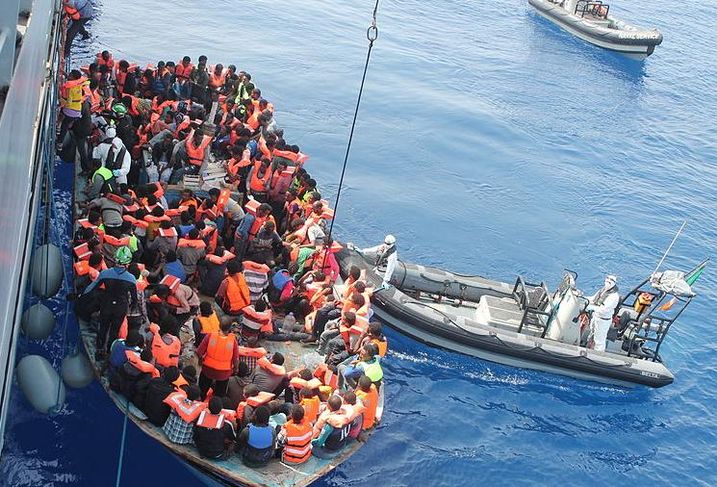 The director of Refugee Action Kingston, a charity in West London, finally finds two minutes to call at 6:55 p.m. She has been preoccupied in trying to find accommodation of any kind for a refugee family and another man who are homeless.

Under U.K. law, once an individual or family is granted refugee status, they have 28 days to move out of any temporary accommodation they were granted.

Djeric Kane’s struggle to find accommodation in one of the most expensive cities in the world is being played out every day across Europe. More than 1 million refugees arrived in Europe in 2015 according to the International Organization for Migration, mainly from Syria, Iraq and Afghanistan. The rate has eased slightly at the end of 2016 and in 2017, but just this week an estimated 12,000 people were pulled from the Mediterranean.

A few real estate companies are creating schemes that can house large numbers of refugees, and help integrate them cohesively into existing communities. 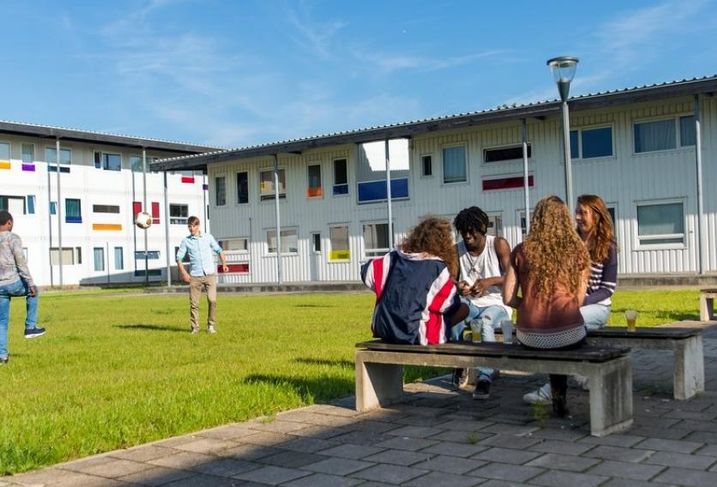 One such project is Startblok Riekerhaven in Amsterdam. It is a unique scheme that provides 463 studio apartments and 102 rooms in multi-person apartments.

For a start there is the project's genesis. Its modular housing units were on a site slated for redevelopment. Rather than dispose of them, the owner, developer De Key, applied to relocate them to another district and set up a community for 18- to 28-year-old “status holders”: refugees given a permit to live in the Netherlands for five years.

The head of the local authority where the units were to be moved did not completely agree with the idea; he wanted to do something that benefited the existing community. The result was a mixed community made up half of refugees and half of local young people.

The site is overseen by a company called Socius Wonen, which specialises in creating schemes that bring together disparate communities, such as students and the elderly.

But as far as possible it is managed by the residents themselves, who agree to take on some of the running of the scheme in return for the right to live there at a reduced rent. Social events like sports, dinner parties or film nights are organised to bring together refugees and Dutch young people. A buddy system matches people with similar interests.

"At Startblok we help with small stuff as a neighbor or friend would do," said Fleur Eymann, a resident who is responsible for the scheme’s public relations. "Startblok facilitates a place where you can make new contacts, friends, build a community and help each other out. Because of the self-management and self-organization, we're very close to our neighbors and friends as an organization."

This assistance spans small practical things, or deeper issues. "This means that if something is wrong, it is easy to refer them to people who can help them," Eymann said. "This is not just about mental health, but also about issues regarding finances, paperwork, school or language support."

The scheme is wildly popular. Refugees are referred to it by the local authority, but there is a waiting list of 1,500 people for the roughly 280 places allocated for Dutch young people. Partly this is a function of the need for affordable housing in Amsterdam, but it also shows how communities in a country, young city dwellers in particular, can be incredibly receptive to migrants.

"The difference from other places is that you're surrounded by people from your own age in a place where it is relatively easy to make contact and build a network, something which is crucial for integration," Eymann said. "We all have a common goal: building a future, since everybody between 18-28 is usually working on his or her career, figuring out what to do in the future, go to school, etc. This common goal is a binding factor." 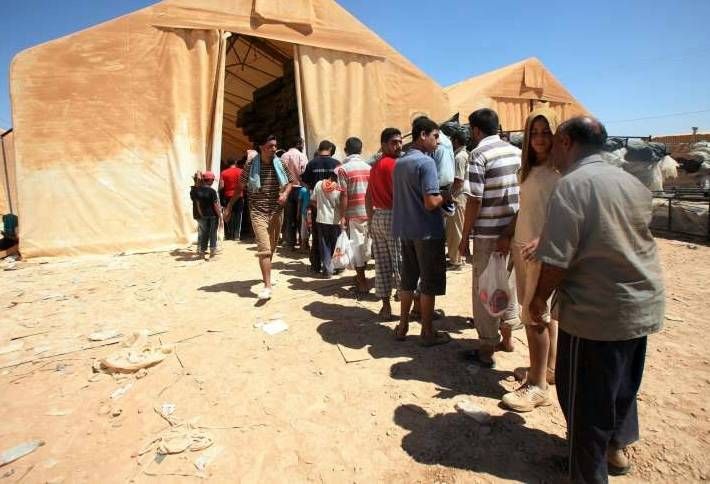 Startblok shows how modular construction methods and innovative thinking can be used to house a significant number of refugees in a single scheme, and balances their needs with those of an existing community.

But to house the multitude of people arriving in Europe for the long term, the challenge is to build more traditional low-cost housing.

In April the Urban Land Institute produced a report, Mass migration and real estate in European cities, which examined the role real estate can play in helping Europe cope with mass migration.

The real estate professionals ULI surveyed did not think mass migration — in the form of refugees and 'economic migrants' — had hugely increased the pressure on social housing systems. But the difficulty in providing low-cost housing in the large European cities where migrants typically head is already acute, and ULI said this was a key factor in helping to mitigate issues.

“Brussels is not a big city, maybe 1 million people, but it is a rich city and it is the capital of Europe, so you would think we would be able to find housing for all the people that need it,” said Lionel van Rillaer, chief development officer at Inclusio, a B corporation investing in and developing social housing in Brussels. “But the city has a waiting list of 40,000 people who need social housing.”

B corporations are set up with a social mandate, and one of the companies that owns a stake in Inclusio is Re-vive, a Belgian company undertaking brownfield urban development of housing and commercial property to benefit people in need of social housing and those with immediate needs like the homeless and refugees.

Combined, Re-vive and Inclusion have raised more than €150M from private and institutional investors to invest in and develop social housing, with more than 10 schemes completed or in progress. The returns are low — around 3% to 4% — but investors like the stability provided by what are essentially guaranteed cash flows from the Belgian government.

Like Startblok, Re-vive does things differently than a typical real estate company. It employs an “impact director” whose job is to liaise with the local community where it is undertaking developments, which include difficult areas like Molenbeek, where some of the attackers in the Paris terrorist attacks of 2015 lived.

“What you need is an operator who does more than just lease the properties,” he said. “They have to take care of other aspects, like teaching people the local language and helping them to get a job. It’s a big undertaking.”

He outlined the more market-orientated problem that developers of low-cost housing face in cities across the world — even though his investors have accepted an incredibly low return, giving him a low cost of capital, Re-vive is consistently outbid for sites by developers building houses to sell higher up the value chain. But here again he sees a solution that governments and local authorities can implement.

“When public bodies are running tenders to sell land, there should be more of a balance between what we want to achieve with a project for society, and the price,” he said. “They should be thinking about more than a big cheque in the short term. For example, a competition was launched for a land sale in Amsterdam recently and price made up only 10% of what you were judged on, and the other 90% was sustainability and affordability. That is a clever way of doing it.”

Of all the countries in Europe, Germany has committed to taking on the most refugees — it accepted almost 1 million in 2015 alone. Chancellor Angela Merkel has faced plaudits and criticism for her stance — Germany needs inward migration to counteract a declining population, and some see accepting refugees as a wise long-term strategy, but she has been criticised for making the country too open.

Taking in 1 million people in a year creates the need for long-term solutions to the issues of housing and integration.

German Estates Group, a German property company backed by U.S. private equity firm KKR, is managing the development of a 431K SF scheme in Munich to meet this need. 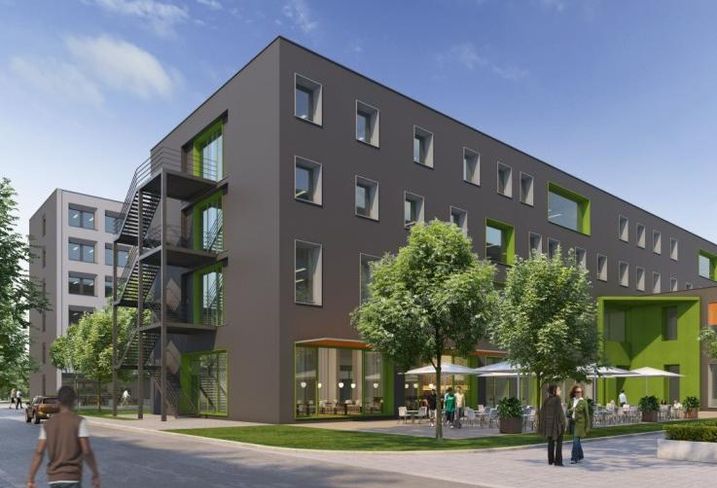 Called Junges Quartier Obersendling, the project is the redevelopment of a campus formerly occupied by Siemens. As well as housing for refugees it will provide local government social services, offices, facilities for children and young people, and multiple training facilities including a school for refugees. With the facility leased to the City of Munich for 22 years it will have an end value of €150M, and serve as a template for other such facilities across Germany.

It will not be ready for full occupation until 2019, indicating how Germany is planning to provide facilities for refugees for the long term. As with the Startblok project, young refugees will receive training from and alongside young people from Munich.

“We were in discussions with the City of Munich about putting residential on the campus, and during the course of the discussions the idea of doing something around the theme of refugees came up,” German Estates Chief Executive Ulrich Höller said. His company is developing the project in a joint venture with Morgan Stanley and German company DIC.

“For us as an investor it is an amazing vision but it is also underpinned by a long lease from the City of Munich. That makes it very attractive.”

Höller said the project goes beyond the financial.

“With our project, we help refugees gain a new life perspective,” he said. “I am personally pleased to be part of this vision. It is a project with an emotional component.”

Ultimately, these projects and companies are one-offs. Building enough low-cost housing to meet the needs of the populations of major European cities is a virtually intractable problem. And attitudes to migrants are fairly entrenched — as the ULI’s report points out, the perception that refugees are draining resources was most prevalent in cities that have accepted the fewest refugees.

But these schemes and many others like them show that real estate can organise itself in a different way, and that this can have a revolutionary effect on companies, developments and even the mindset of populations.