The Way You Walk Around London Will Radically Change — Maybe Forever 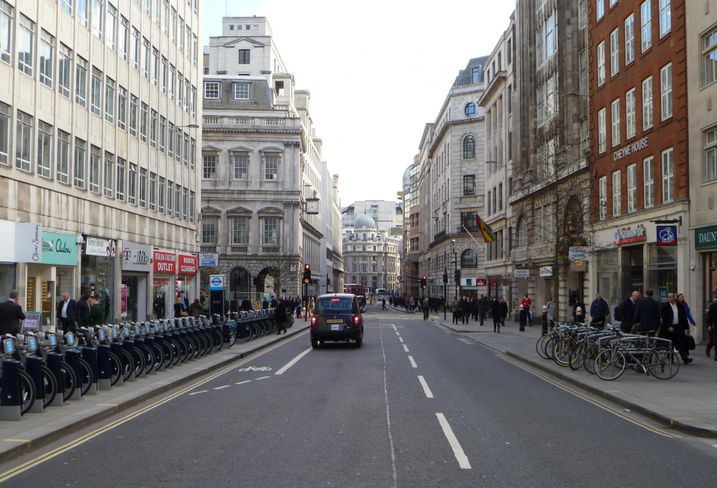 Wikimedia Commons
Cheapside is set to be pedestrianised.

Local authorities and major property owners have begun unveiling plans for how workers will move around the business districts of London when they return to work — and some of the changes being put in place could become permanent.

The City of London Corporation and Canary Wharf Group, which control the areas where much of London’s financial service industry calls home, have published proposals to help workers maintain social distancing when using public space.

In the City of London this will include some significant streets being closed to traffic for some or all of the day, and pedestrians taking over the roads. Intriguingly, in its document on the proposals, the City of London said some of the changes could be permanent if they are deemed a success, significantly changing the built environment in one of London’s busiest areas and where many of the capital’s most valuable offices are located.

Cheapside and Poultry will be closed to traffic, and Lombard Street will be pedestrianised from 7am to 7pm. Parts of Cannon Street, Queen Victoria Street, Threadneedle Street, Leadenhall Street, Old Jewry and St Mary Axe will be made one way or permit only buses and bikes, with remaining lanes given over to pedestrians.

The measures should allow people to more easily stay 2 to 3 metres apart, the City said. The City also said some on-street parking will be given over to bike parking and dockless bike stations.

Canary Wharf, the docklands estate, is a different beast, in that it is privately owned and has far fewer roads with car access.

The guidelines it published last week said that in heavy footfall areas around shops and offices, one-way walking routes will be introduced to allow social distancing. Within buildings, signs will tell people not to pass on escalators, and foot markings will show where people should stand.

Doors will be left open so they don’t have to be pushed, and doors usually operated by pushing a button will open automatically. Hand sanitiser will be at the entrance to all buildings, and floor drying machines will be used to clean floors with sanitiser.

Canary Wharf Group said that it is limiting the number of passengers per lift to four. At its one Canada Square office tower, the second tallest building in Britain, that means each of its four lift banks can transport up to 56 people every five minutes, equating to 2,700 an hour, which would be more than capable of meeting demand from people using the building.

Around 3,000 people have been working in Canary Wharf during lockdown, according to the FT, compared to a usual daily figure of 125,000. The estate’s owner, Brookfield and Qatar Investment Authority-backed Canary Wharf Group, said it had expected that figure to rise past 12,000 when the lockdown was eased last week, but in fact it ticked up only marginally, as people continued to work from home.