Landlords Have Lost Control of Houston

Office experts at Bisnow’s State of the Market this week don’t believe Houston will slip into recession or find itself with ghost buildings. That said, there are some weak spots, and the balance of power has shifted to tenants. 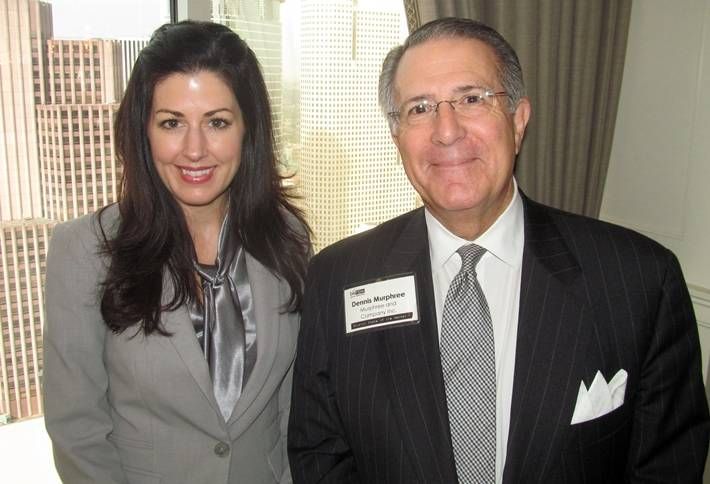 Gone are the days when limited supply meant tenants had to pay whatever a landlord wanted to get a quality office. NGKF executive managing director Brandi McDonald (caught chatting with Murphree’s Dennis Murphree) says there are more than 100 good options for credit companies larger than 100k SF, and that stat just keeps growing. 30 of the blocks are in existing buildings, 15 are delivering soon, 50 are proposed developments that’d love to break ground for a tenant that size, and six are subleases. 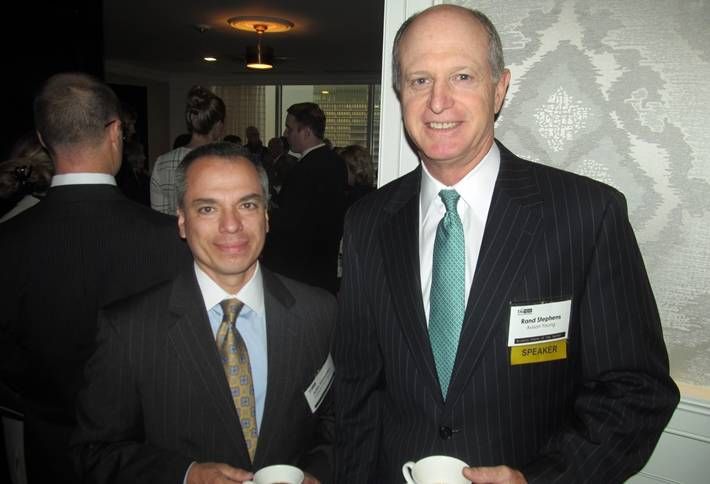 Sublease space has risen dramatically to be 3.1% of the total office market, according to Avison Young managing director Rand Stephens (snapped here with Independent Bank’s John Gonzales). Those blocks can be a good deal for tenants, Brandi says—they’re often nice offices and are usually pretty ready to go. Brookfield EVP Paul Frazier believes that high-quality space with lots of term left will get good competition, while short remaining term offerings will struggle. Howard Hughes EVP Paul Layne offered a suggestion for landlords with big sublease blocks—if you’re confident in your building and especially if the sublease is a rare vacancy in the building, consider buying out the lease from the sublessor. (No one can lease space as well as the landlord, he says.) 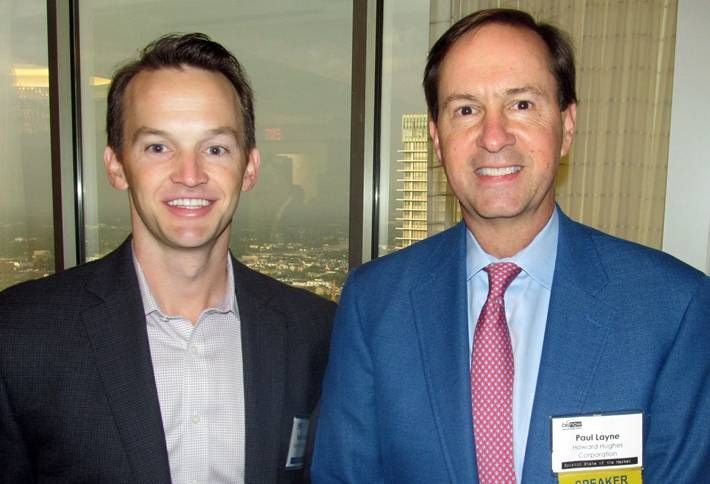 Paul Layne (here with Blazer Real Estate’s Nathan Kelley) admits that things are extremely difficult for new construction today; tenants are hesitant to sign there because they’ve usually got the highest rents and ask for long-term leases. (Howard Hughes has built seven buildings in the last three years. The six that completed before oil prices dropped are very occupied, but the one delivering in December is still 90% available.) On the flip side, he says landlords of highly occupied existing product will do very well—tenants want to stay put and although they might downsize or insist on short-term leases, they’ll sometimes pay a premium to renew. 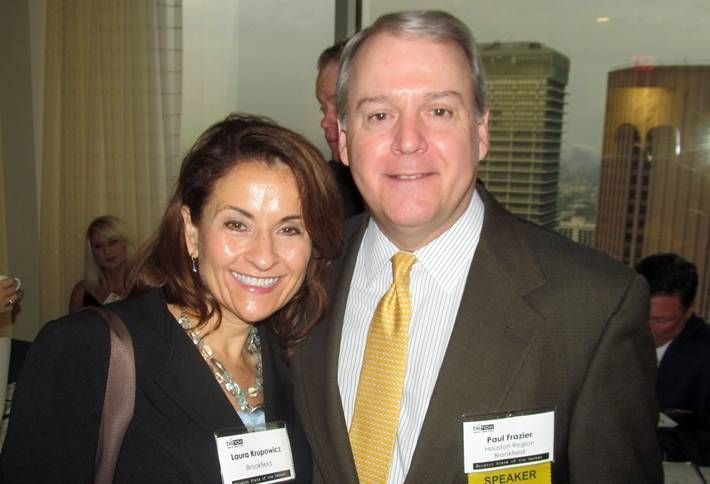 Paul Frazier (pictured with colleague Laura Krupowicz) says landlords need to do more in this market, including whiteboxing space and activating amenities. Marketing and cold calling are also back in focus. He says it’s too early to tell how things will shake out this year—we’ve had positive job growth so far (which he predicts will hold through the year, but from different sectors than it has been), and he doesn’t expect we’ll see a giant surge of bankruptcies or loan defaults. And Paul doesn’t believe Houston’s slowdown at all changes our perception as a gateway city. The Port and Medical Center are still doing great, and even New York and Los Angeles have cyclical real estate markets and downturns. That said, he suspects the office market will have slight negative absorption in 2015 and then a flat 2016. 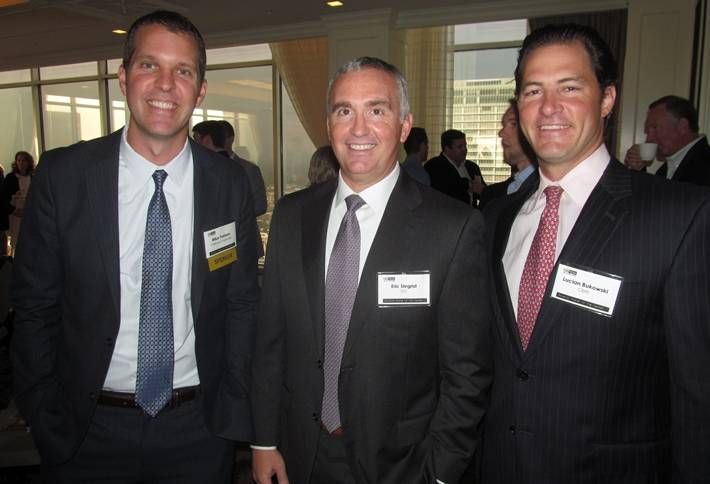 Parkway managing director Mike Fransen says that touring activity from prospective tenants is back now, so it’s just a matter of waiting until those start progressing into deals again. He says Houston’s macro dynamics are healthy, and Parkway still loves this market. He expects the next two years to be pretty flat, with certain pockets swinging for better or worse. Mike’s far left with DTZ’s Eric Siegrist and CBRE’s Lucian Bukowski. 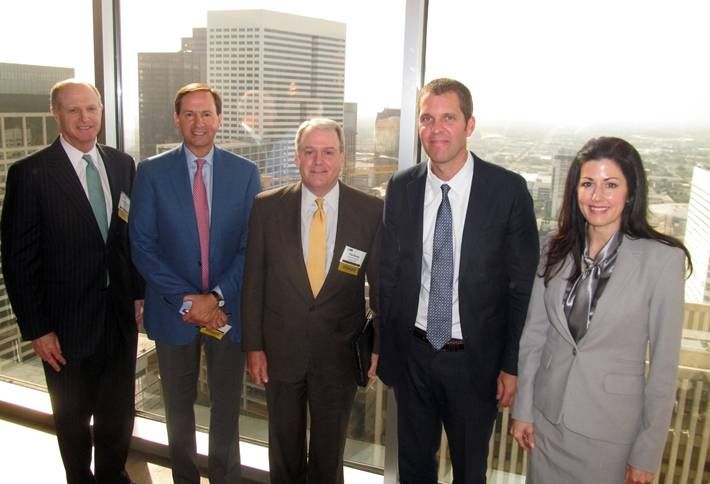 Brandi’s forecast is only slightly more negative; she thinks the upcoming third round of layoffs and increasing M&A activity will cause the office slowdown to be deeper and the recovery to be slower than most people expect. She thinks fundamentals will dip this summer, and it’ll take us four to six quarters to get back to stability. Meanwhile, office vacancy could hit the high teens. Her biggest concern, however, is what’ll happen if Iranian sanctions are lifted, which could plummet oil prices again. 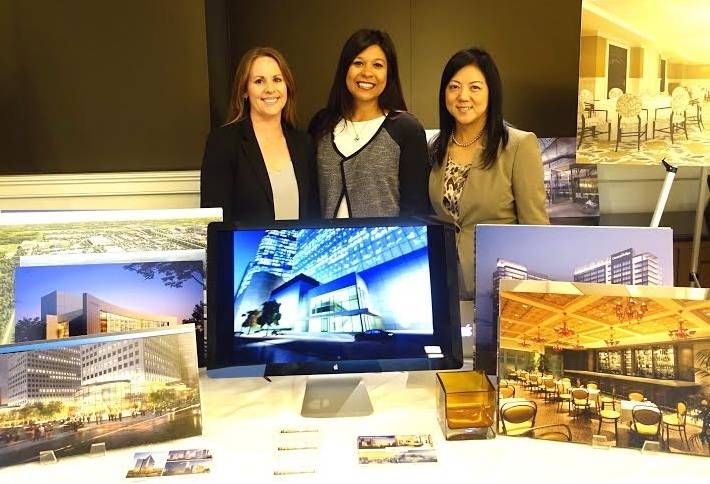