Hughes Landing, the mega mixed-use project being developed by Howard Hughes Corp in The Woodlands, has a flurry of deliveries starting this month. We got an early tour through the property.

Begin slideshow
View as one page
1 of 16 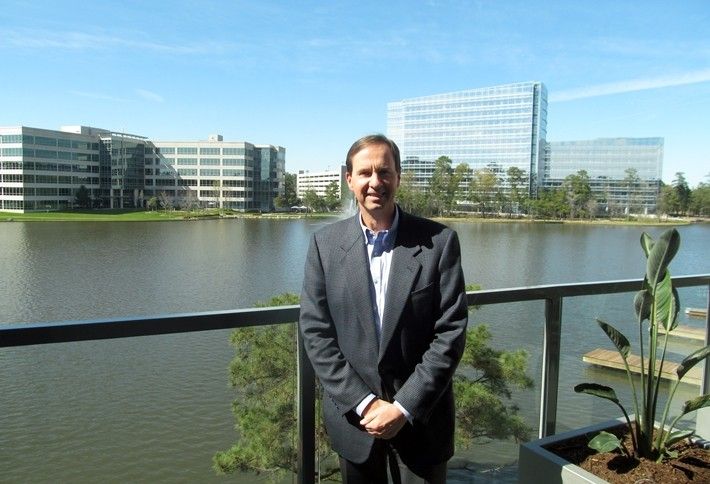 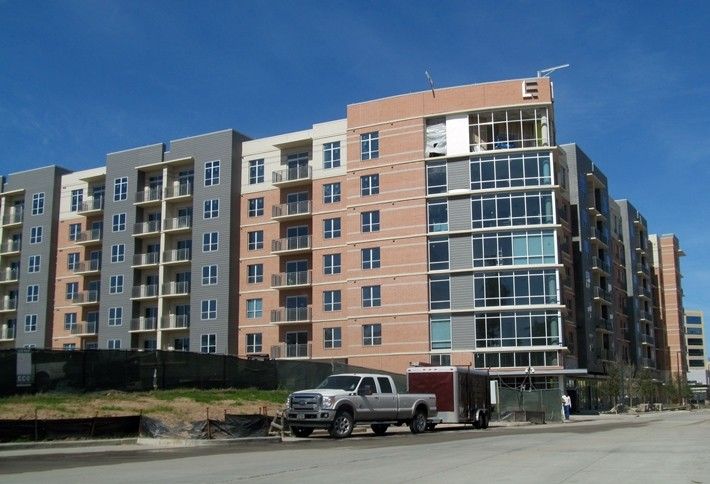 Instead, it built One Lakes Edge (lovingly nicknamed “OLÉ!”). The 390-unit community is designed by Ziegler Cooper. It started leasing on Jan. 15 with a bang—30 leases inked the first day—and is now 18% leased. The first residents move in April 20, and it’ll celebrate its grand opening in mid-May. 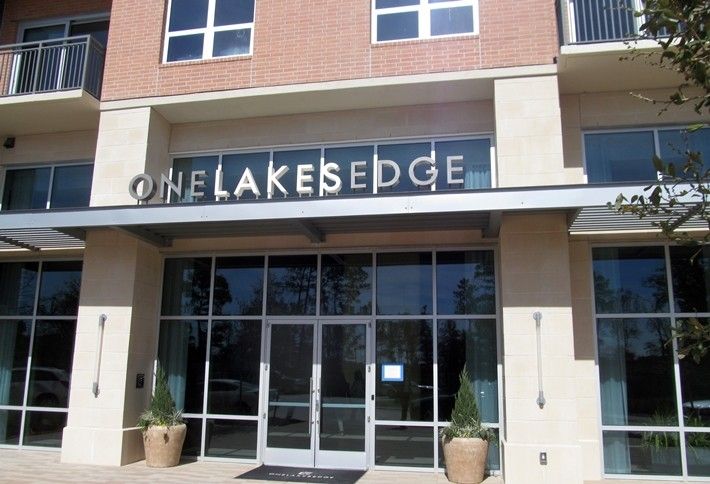 Residents will enjoy a first-class fitness center, giant club/lounge floor with a patio and show kitchen, and a pet park along the lake. Howard Hughes is also planning a kayak rental (it's the pet project of Peter Doyle, who's been overseeing the entire development's design), and has a hike and bike trail along the lake that connects to The Woodlands’ 200-mile trail system. 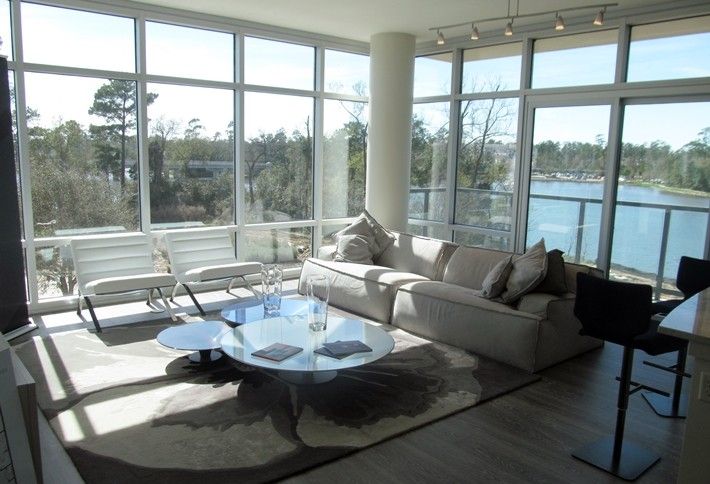 We toured this sunny third-floor corner unit. Howard Hughes selected five different decorators to design five apartment models. Residents can select one and have a unit built out to their liking. 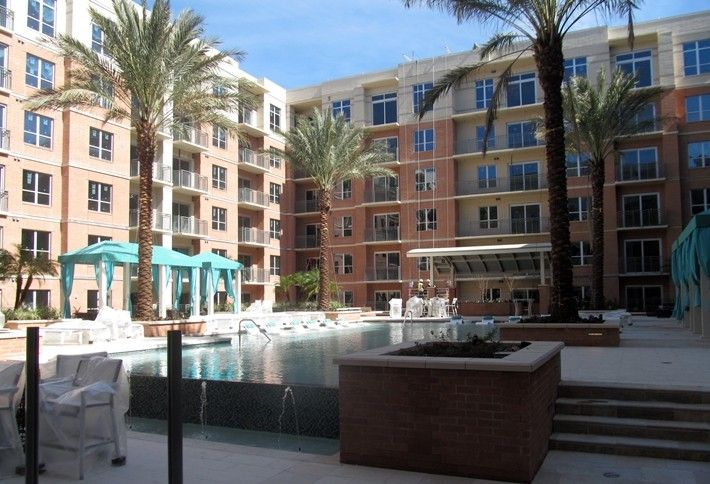 Paul turned to his (Millennial) kids for advice in picking multifamily amenities. His daughter told him that many apartments have a beautiful pool deck but insufficient sun exposure, so the team built a wide pool deck and placed the lounge chairs where they’d get sun most of the day. 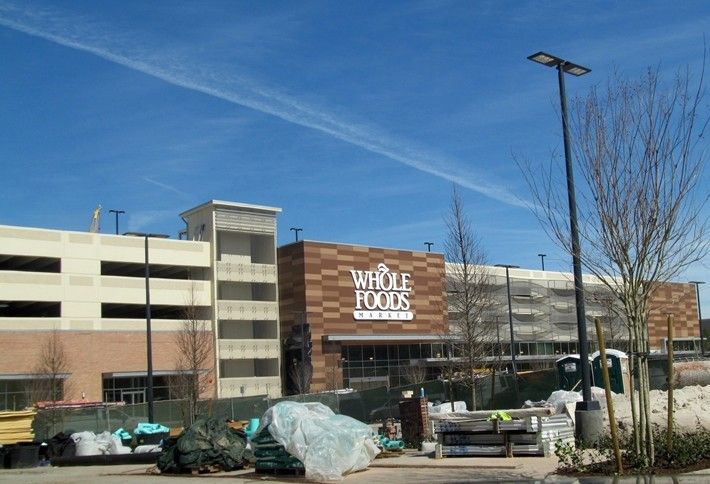 Across the street, Whole Foods is putting in its finishing touches. The grocer opens March 18. Cadence Bank and Pier One are already signed on in that complex, and Paul tells us there are a few more retail leases pending. 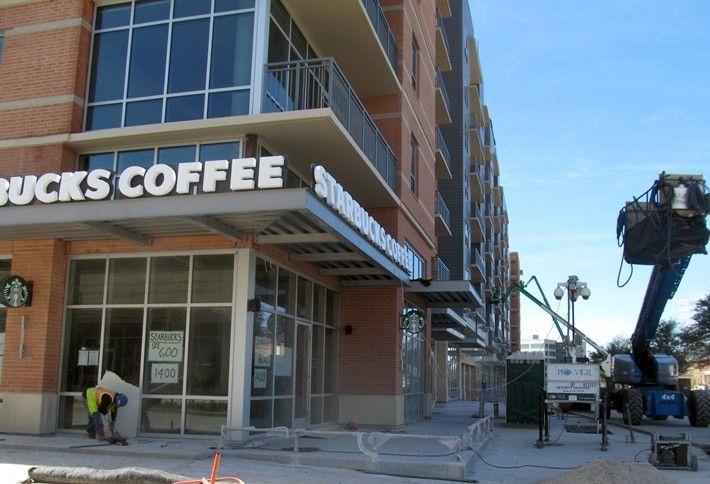 One Lakes Edge has 22k SF of ground-floor retail, including Starbucks, which opens March 18. The team is working on a salon and a dessert shop now, and residents can pamper their pets across the street at Kriser's Natural Pet, a dog/cat supplies store. 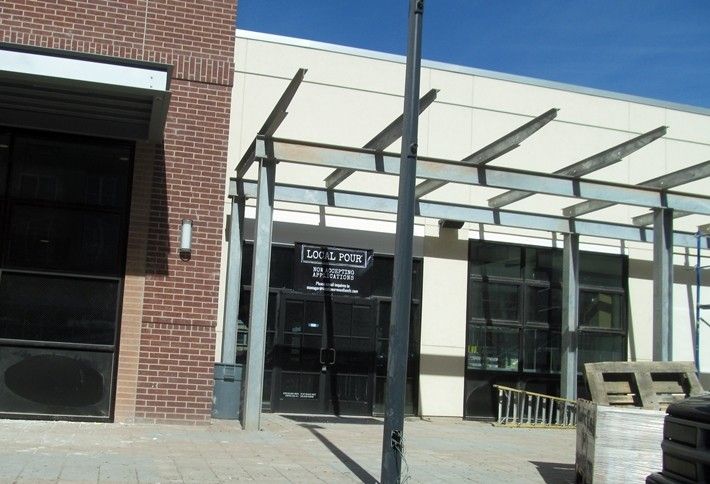 Escalante’s will be the first restaurant to open (this month), followed shortly by Local Pour. 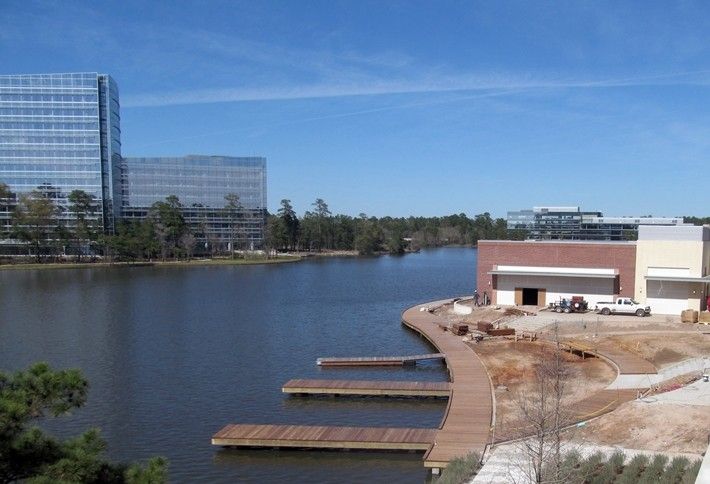 Truluck’s has taken the lakeside spot on Restaurant Row. For an exceptionally romantic night, couples can row up to dinner in non-motorized boats and dock at these piers. 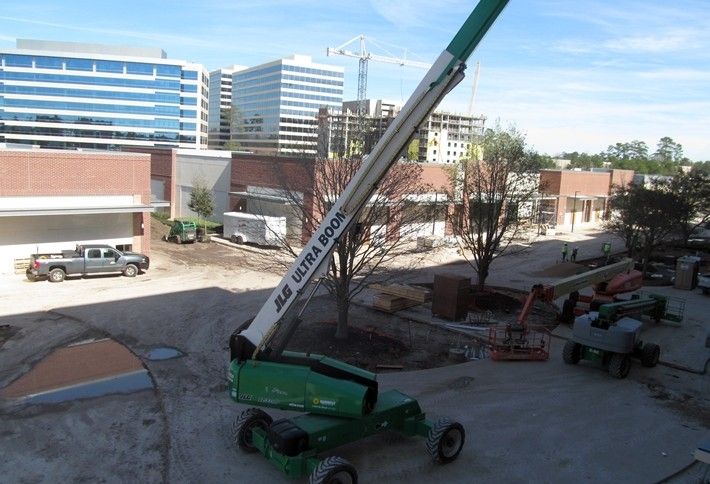 Restaurant Row features a wide esplanade with trees that Howard Hughes relocated from around the site (landscaping is starting throughout the project soon). California Pizza Kitchen and Del Frisco’s Grille are also signed on. 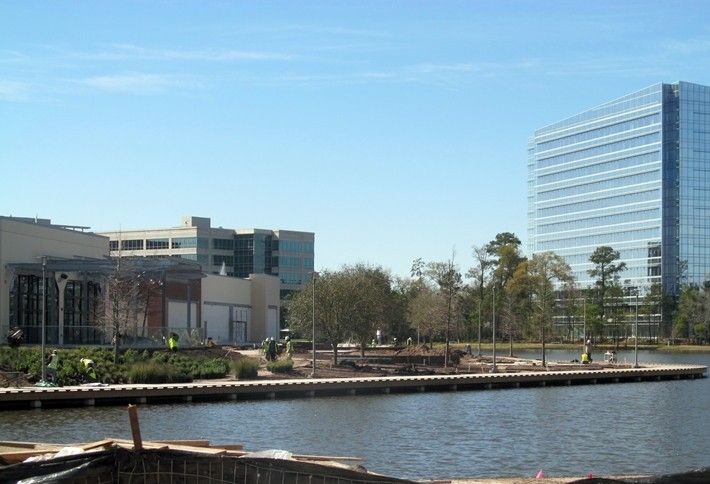 At this outcropping from Restaurant Row is a stage with seating for 100 to 150 people for outdoor concerts. 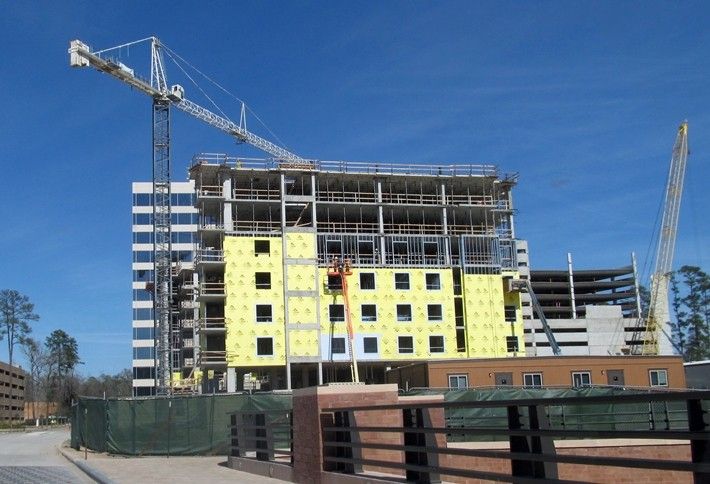 Embassy Suites will open this December with 205 rooms. It’s designed by Mitchell Carlson Stone and includes a rooftop pool deck and meeting space. 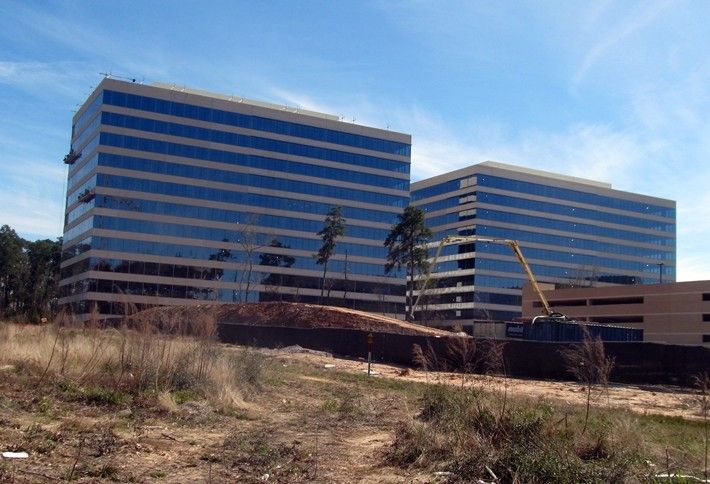 Behind the Embassy Suites are the two Exxon buildings, which are 325k SF apiece. The energy giant took 100% of the first and 50% of the second property for a total 485k SF presence, plus an 800k SF garage. Kirksey designed the Class-A facilities. They open in October. 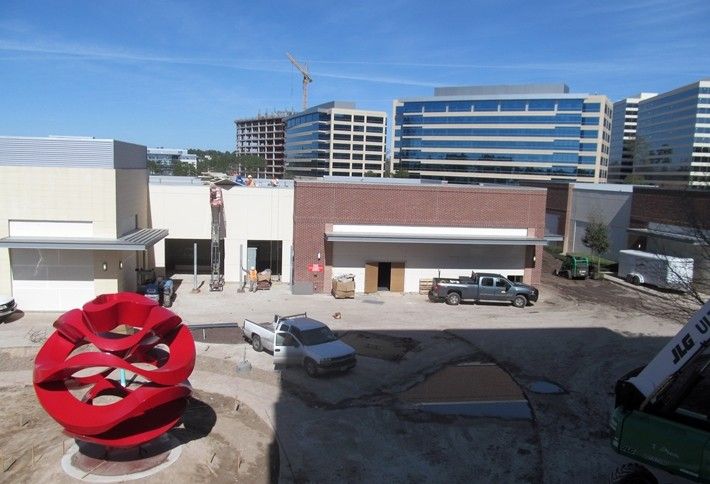 Peeking over Restaurant Row (and its art installation), we snapped One, Two and Three Hughes Landing. One Hughes Landing reached 100% pre-leased before delivering in 2013, and Two is 87% leased. (It opened last year.) Paul says pending deals will bring it over 90%. 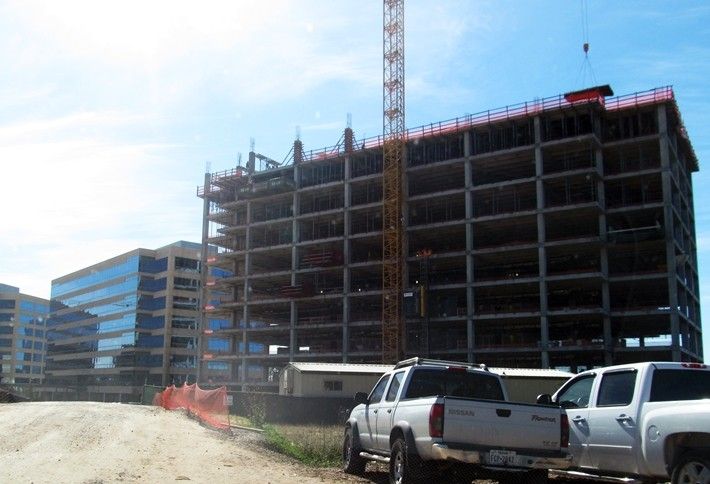 Three Hughes Landing opens at the end of this year, and The Woodlands Development Co/Howard Hughes will take 15% of that 321k SF building.