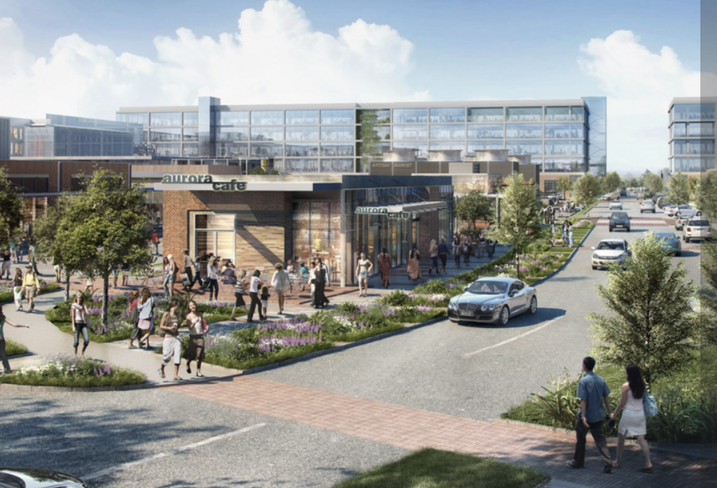 Courtesy of StreetLevel Investments
A rendering of a new mixed-use project, dubbed The Grid in Stafford.

In-N-Out Burger, the California-based burger joint with a passionate following, will finally make its Houston debut in Stafford after many, many years of teasing the possibility.

That is just part of a $500M development that Dallas-based StreetLevel Investments and partner Provident Realty Advisors Inc. are building on the former Texas Instruments Inc. campus in Stafford. The team broke ground there Monday on a 192-acre, mixed-use project called The Grid.

Redevelopment talks with Stafford City Council began in 2015, a year before the developer acquired the property at 12201 Southwest Freeway at U.S. 69 and West Airport Boulevard. The first phase of the $500M multiphase project will open next year.

Retail and restaurant concepts will make up 350K SF of the redevelopment and leases are already signed with Whiskey Cake Kitchen & Bar, Pluckers Wing Bar, Outback Steakhouse and Chipotle. The center of the mixed-use environment will feature a food hall — a hot trend in Downtown Houston that is less common in the suburbs.

In addition, The Grid will feature 500K SF of office space, which will be leased by CBRE Group, and 2,400 residential units. (Dallas-based JLB Partners is building one 380-unit community.) It will also include Drive Shack — a New York City-based golf-focused entertainment concept, hotels, a health club, a cinema, public parking garages and street-side parking, green space and The Lawn, a public space to host events.

More than 750K SF of the original buildings from the TI campus will be adapted by StreetLevel to create The Grid. Houston-based Gensler and TBG will serve as project consultants.

"The former TI campus, which was the home of much innovation powering today’s technology, will now be transformed into a tech-savvy, mixed-use development,” Fort Bend Economic Development Council CEO Jeff Wiley said in the release. “We have worked on the delivery of this project with the developer, city, county, water district and development authority for quite some time.”

Texas Instruments relocated its manufacturing plant from Stafford to a business and development center in Sugar Land in 2012.