Thanks to a Bisnow friend who took these aerials from a helicopter just for us, we’re tackling The Woodlands submarket today from the air. There's lots to see—it's delivered nearly 500k SF already this year and has 2.5M SF more under construction. Much of that is clustered around Lake Woodlands. Pictured: Howard Hughes’ Hughes Landing (1), JD Warmack’s Research Forest Lakeside (2), and CB&I’s new 150k SF building (3) sporting their cranes.

Howard Hughes EVP Paul Layne tells us 1M SF has launched or delivered in Hughes Landing over the last 18 months, and it’s 85% pre-leased overall. One Lake’s Edge (1, multifamily) will start leasing in 90 days, and Whole Foods (with the parking structure, 2) broke ground last week. In Restaurant Row (3), Escalantes and Local Pour have already been announced. Along the lake (4) are One and Two Hughes Landing—Paul says he’s close to announcing a hotel next to it (6, Howard Hughes will own/manage the facility and is negotiating with a flag now), and he anticipates starting Three Hughes Landing this fall (it'll be to the right of Two Hughes in this photo). Those two buildings labelled 5 are Exxon's. (We hope you watched Sesame Street today to keep up with all these numbers.) 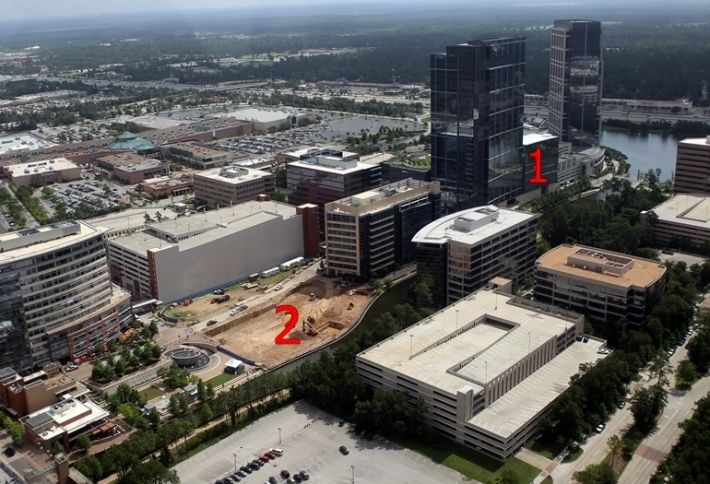 Anadarko (1) has finished and occupied its second tower. It added 550k SF to the firm’s HQ, bringing it to 1.4M SF in The Woodlands. (The Woodlands Area EDP CEO Gil Staley tells us the structures are named Allison Tower and Hackett Tower, after two former Anadarko CEOs, and they’re the tallest buildings between Houston and Dallas.) Down the street in Waterway Square, the 303-room Westin (2) broke ground three weeks ago. It’ll open before next Christmas. 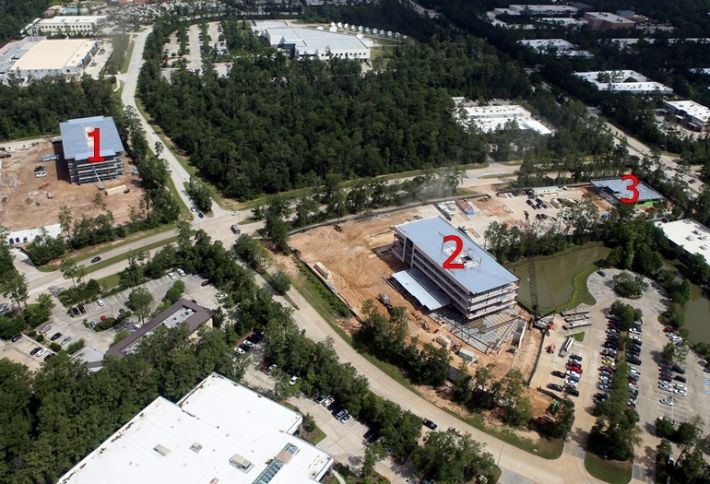 Here we’ve got Kiewit Energy Group's building (1, Howard Hughes is developing it) and Black Forest Ventures’ Black Forest Technology Park. Paul says Kiewit’s 95k SF facility will deliver in January. BFV is completing build-out of its park with 2829 Technology Forest Blvd (2) and a flagship 11k SF Black Walnut Café (3). BFV's Haydar Kutsu tells us the former is an 82k SF, spec Class-A office building delivering this fall. The restaurant will provide it (and other nearby offices) with banquet facilities. 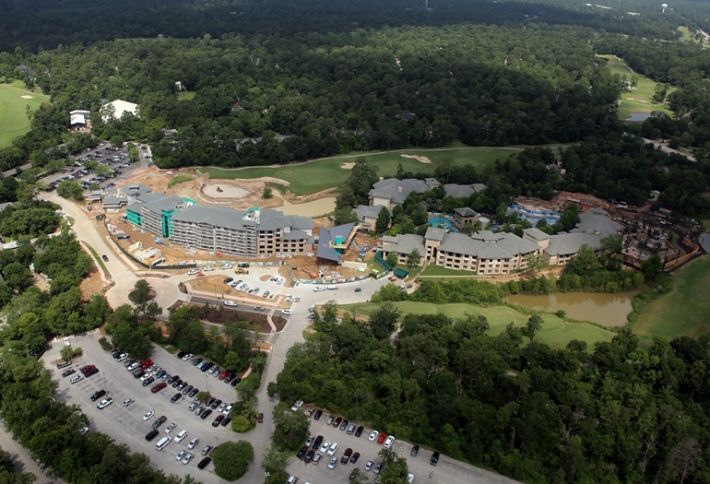 The Woodlands Resort is coming near the end of its $65M renovation. Paul says every room and all public spaces were upgraded. Plus, it’s adding 184 rooms from the ground-up (left, they’re delivering in September), a new lazy river (opening next week and one of the longest in Texas), and a new steakhouse called Robard’s (Howard Hughes’ middle name). Paul tells us it'll reclaim 15 acres for future development on the resort. 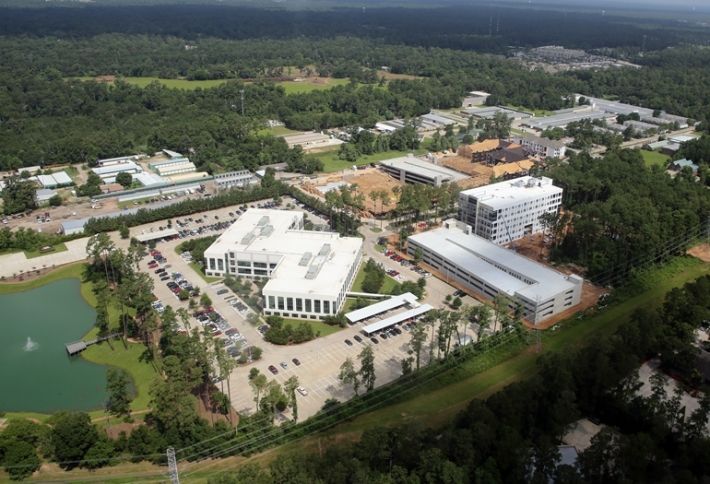 Stream Realty has delivered The Reserve at Sierra Pines I (175k SF), and Sierra Pines II is underway. Stream's Clif Kennedy and Paul Coonrod tell us that six-story building totals 154k SF and is 80% complete. Next up: finishing the fountain and Garden of Eden. It'll deliver in September and is seeking a tenant (hopefully not Apple). 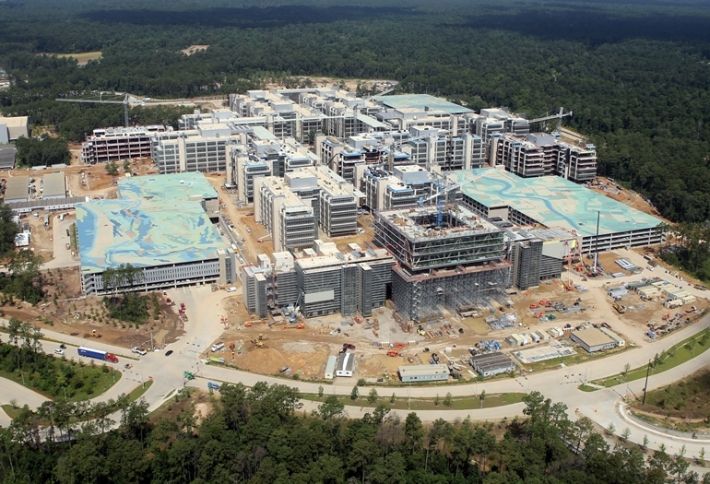 It’s outside of The Woodlands proper, but we can’t leave off Exxon—its 3M SF campus is always mindboggling to see. (We tried to count the buildings here, but we ran out of fingers and toes.) Some employees have moved onto the campus already, and most of the rest will follow within a year. 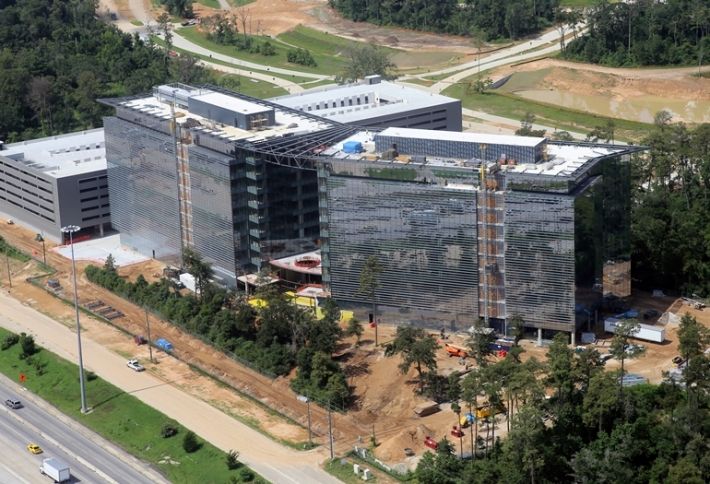 Across Springwoods Village, Southwestern Energy’s facility is almost complete, with employees moving in January 2015. (The only downside is having to wait 12 months to see how it holds up during a Christmas party.) Meanwhile, CDC Houston just announced its CityPlace project, bringing 400k SF of retail, 4M SF of office, multifamily, and hotel uses into a 60-acre town center development. (It’ll break ground later this year.)