Property Development Is Starting To Take Off At The Houston Spaceport

When people think of a spaceport, they envision an upright rocket launching into the sky. But the Houston Spaceport is chasing a different kind of liftoff — the commercial kind.

Combined with a 12% budget increase for NASA in Fiscal Year 2021, and regular economic infusion from the Johnson Space Center, space is keeping commercial real estate humming here on the ground. 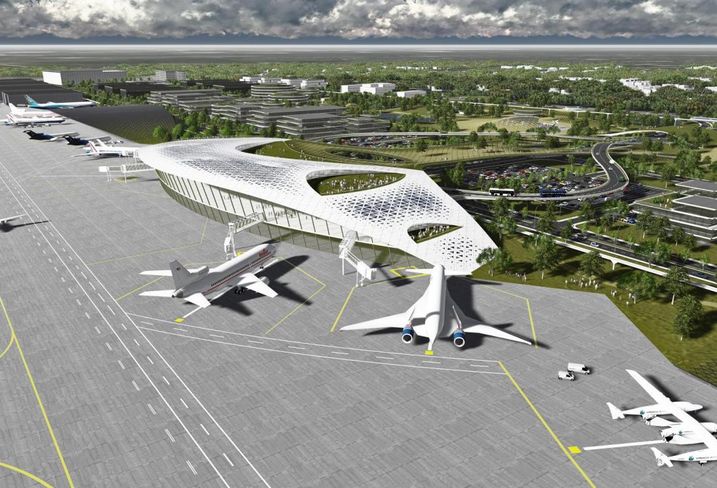 The Houston Spaceport is on the southeast side of Ellington Airport, a public and military-use airport about 15 miles southeast of Downtown Houston. Phase 1 of the spaceport broke ground in June.

The Phase 1 expansion covers 154 acres, and includes the construction of streets, water and wastewater infrastructure, pipelines, electric power and distribution, as well as communications facilities. That phase is expected to be completed in the first half of 2021.

The spaceport comprises 440 acres in total, with 400 of those acres available for build-to-suit development.

The spaceport’s proximity to both Downtown Houston and the NASA Johnson Space Center set it apart from some of the other commercial spaceports in the U.S., which are often in remote areas to allow for vertical rocket launches.

Though hypersonic, suborbital aircraft are not yet the norm, officials are thinking about how to position Houston as a leading transportation hub in the future. In 2015, the Federal Aviation Administration approved the commercial spaceport license for the Houston Spaceport, which allows horizontal launches of spacecraft. The spaceport has a dedicated control tower that has mission-control facilities for commercial spaceflight operations.

“We felt that Houston, as a large metropolitan area that has always been on the forefront of transportation, needed to be able to stake a claim in this hypersonic market, whenever the technology catches up,” Bay Area Houston Economic Partnership aerospace marketing manager Jimmy Spence said. 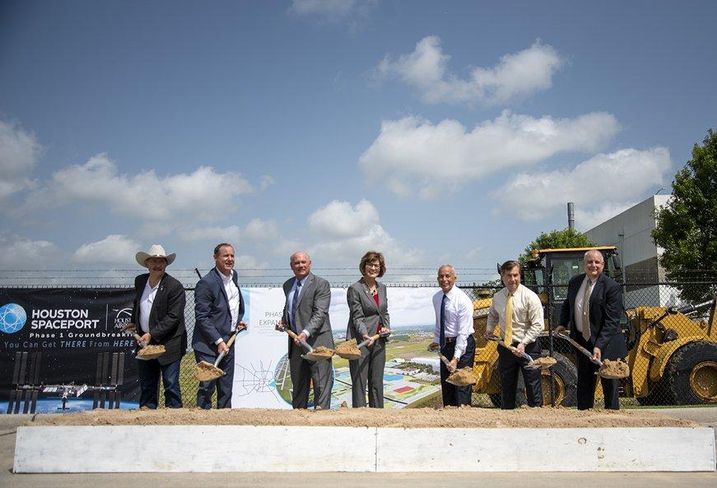 Courtesy of Houston Airport Systems
Groundbreaking of Phase 1 of the Houston Spaceport in June 2019.

While the Houston Spaceport may never launch a vertical rocket, many hope it will attract more commercial aerospace opportunities and investment to the city.

As work continues on Phase 1, the spaceport has already secured multiple tenants.

The latest company to make headlines at the Houston Spaceport is Axiom Space, a Houston-based startup. Axiom landed a major contract in January from NASA to build and attach commercial modules to the International Space Station. Those will include a node module, a research and manufacturing facility, a crew habitat and an Earth observatory. Axiom intends to launch the first module in the second half of 2024.

To achieve this, the company announced last week its plans for significant expansion, including the construction of a large facility at the Houston Spaceport. Axiom is in discussions with the city of Houston to lease a 14-acre plot to house the facility, and is also in the process of negotiating a lease for temporary office space.

Spence said Axiom’s rapid expansion is relatively rare for Houston, but that the Bay Area Houston Economic Partnership is keen to attract more companies like Axiom that want to branch out into areas like assembly and manufacturing.

“That amount of acreage and the amount of people that they’re looking for, is the type of project we would like to encourage in the future. It’s just not something that we’ve seen a lot of in Houston to this point so far,” Spence said.

Another tenant in the Houston Spaceport is the San Jacinto College EDGE Center, which serves as its official education training partner. The EDGE Center offers tailored training courses to develop the workforce needed for future aerospace expansion in Houston. The center is also based in the HASC building.

Right now, the HASC is the sole completed building at the spaceport. Between Intuitive Machines and the EDGE Center, the building is fully leased.

Rice Space Institute Director David Alexander was involved in the development of the EDGE Center, and said the Houston Spaceport learned some valuable lessons from bidding on the Blue Origin rocket manufacturing plant, which was ultimately awarded to Huntsville, Alabama.

One of the key differences between Houston and Huntsville was that the winning city already had an interspace training center — something the Houston Spaceport realized it could create for itself.

“We want to attract companies to the Spaceport for all the right reasons,” Alexander said. “In order to do that, we are actually emphasizing our strengths, identifying our gaps and weaknesses, and then trying to get rid of those weaknesses.”

Aviation training company FlightSafety International announced plans in October to build a new learning center in the Houston Spaceport. The company has leased 6 acres, and construction is slated to begin in spring 2020. The facility will be equipped with flight simulators for a variety of aircraft types, as well as other training devices for pilots, flight attendants and aircraft maintenance technicians.

Alexander said that while the timeline of the Houston Spaceport may seem slow, the eventual results will see major benefits for the commercial real estate sector.

“If the commercial industry blossoms, we have a number of companies locally that will benefit from that, and you would have to think they will need bigger or newer facilities and perhaps that would end up being at the spaceport,” Alexander said. 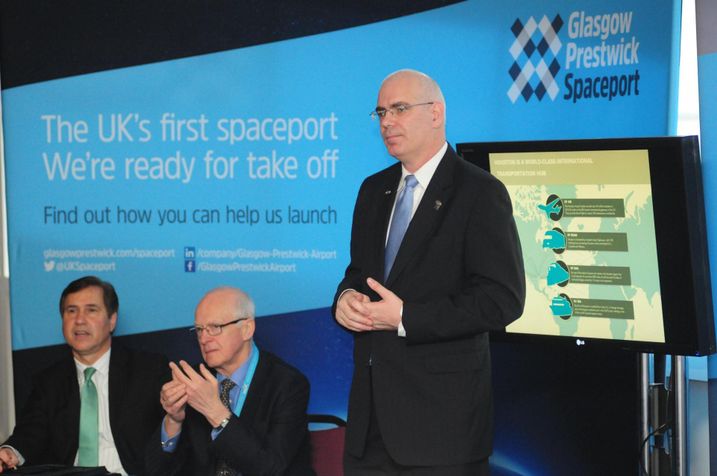 A proposed 12% increase to NASA’s budget for Fiscal Year 2021 could also have a significant impact on the future growth of the aerospace industry in Space City.

The Trump administration released its proposed federal budget this week, including a proposed NASA budget of $25.2B. More than $5.6B of that amount will be for the Johnson Space Center, which is about $500M more than what was allocated for 2020, NASA Johnson Space Center Director Mark Geyer told the Houston Chronicle.

The major increase in potential funding reflects the Trump administration’s goal to return to the moon by 2024. But Alexander is skeptical that the proposed budget, which must be approved by both the House of Representatives and the Senate, will survive in its current form.

“If the country does want to get to the moon by 2024, or try to get there by 2024, they’re going to have to fund all the right level of activities, and that will have a strong component of the Johnson Space Center,” Alexander said.

“I think you can reasonably expect that a significant increase in the budget will benefit the Johnson Space Center quite dramatically.”

Of the $5.6B allocated to the Johnson Space Center, nearly $3.2B is intended for LEO and spaceflight operations. Another $2B is slated for deep space exploration systems.

A spokesperson for the NASA Johnson Space Center told Bisnow that the proposed budget will sustain efforts to work with commercial companies to send science investigations and technology demonstrations to the moon before human missions.

There are hundreds of contractors and subcontractors in Houston that supply NASA and aerospace-related projects. While major players like Boeing and KBR occupy substantial office space in Clear Lake, smaller companies are scattered all over the greater Houston area. 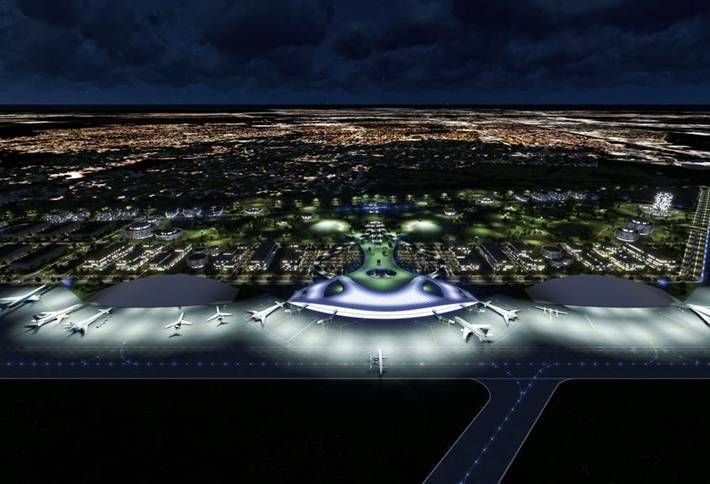 Spence said many aerospace companies in Houston primarily provide engineering services, and tend to have a relatively small office footprint.

But while there is available office inventory in Clear Lake, many of those buildings are dated, making it difficult to attract new companies to Houston, Spence said.

“Everybody wants brand-new office space, brand-new amenities and all that stuff, and it takes the market a little while to catch up, especially when they have to remodel existing buildings,” Spence said.

The NASA/Clear Lake submarket comprises 5M SF of office space, according to Avison Young. The vacancy rate in the submarket improved to 18.3% in Q4 2019, compared to 20.1% recorded a year prior. Meanwhile, the construction pipeline has been limited, with only one 22K SF building under construction, and delivery expected this month.

Space Center Houston, the Johnson Space Center's official visitor center, serves as a major conduit for visitors in the region. In 2018, the center received more than 1 million visitors, and generated an economic impact of about $73M in the greater Houston area.

“As the spaceport draws people in, for all these different purposes — the retail market, the support infrastructure that comes in, it’s all the people down the line that will make these things worth the investment," Alexander said.