A full block of retail space is getting a facelift in the Texas Medical Center.

Pearl Hospitality is transforming the street level with its recently announced Westin Houston Medical Center redevelopment, which is set to open in early 2020. The 273-room hotel replaces the historic Medical Towers building. 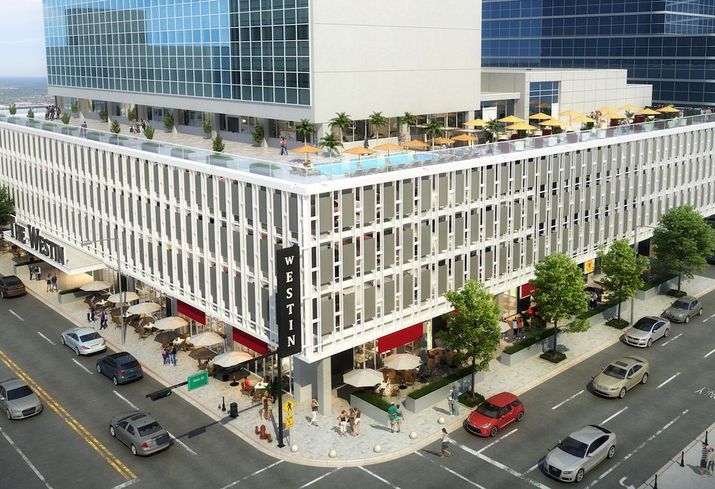 The revitalization efforts will include renovated storefront facades and curated landscaping to go along with dedicated patio areas for tenants.

“The Texas Medical Center market brings a unique mixture of visitors, employees, students, physicians and patients that interact in a concentrated area every single day," Shop Cos. landlord representative Christie Amezquita said in a release. "Pearl Hospitality’s creation of this sophisticated urban street-level experience featuring high-quality food and beverage is the perfect amenity to serve such a diverse community and is unlike any other project in the City of Houston. ”

Craig Young and James Patterson have joined CBRE's Valuation & Advisory Services in Houston as executive vice president and director, respectively. The duo will focus on right of way services for transportation, environmental, utility and development projects of all types. With nearly 30 years of experience, Young will lead business development for right of way acquisitions. Patterson brings 17 years of experience in right of way appraisal and consulting assignments. He will co-lead the right of way specialty practice with Mike Miggins. Both joined CBRE from JLL, where they managed valuation and consulting services for large-scale infrastructure projects.

Manhard Consulting, a national civil engineering and surveying firm, has opened a new office in Katy. The location will be home to Manhard’s commercial site team, led by Senior Project Manager Guillo Machado. The Katy office will handle residential and land development for projects in the region. This marks the firm's fourth office in Texas.

Matteson Hamilton was promoted to partner at Stream Realty Partners. Hamilton's new leadership role will be in addition to managing the industrial leasing team and day-to-day advisement of a 25M SF leasing and management portfolio. Since Hamilton joined the firm in 2009, he has grown Stream's Houston industrial portfolio by 350% and been instrumental in completing over 5M SF of industrial development.

Rehco Clear Lake LLC bought 9.5 acres along the Gulf Freeway between FM 2351 and El Dorado in Houston. The property will be used for a Jaguar and Land Rover dealership. Moody Rambin's Bob Gulley represented the buyer. JT Lynch's Terry Lynch represented the seller.

David Weekley Homes has acquired the largest available tract of land on the eastern side of the Heights to develop a $50M urban community. The 4.8-acre tract at 2100 Airline Drive and a 1.3-acre tract at 1602 Northwood St. are accessible to Interstate 610 and Interstate 45. The larger site housed a mobile home park, the only one left on the Heights' east side. NewQuest Properties' Chris Dray represented the seller. 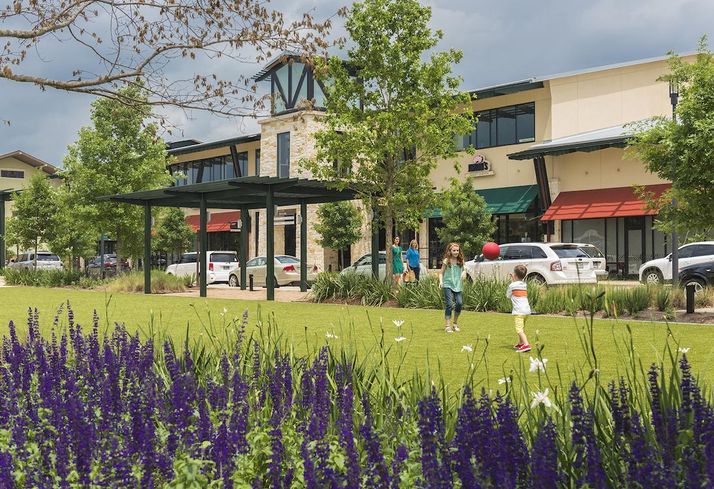 Courtesy of The Howard Hughes Corp.
A rendering of Creekside Park Village Green in The Woodlands

Skylar Grace Spa signed a lease at 26400 Kuykendahl Road, Creekside Park Village Green in The Woodlands. Build-out is expected to be complete this summer.

MRC Global Inc. expanded its footprint in Port Crossing Commerce Center by taking an additional 128K SF in a recently completed 600K SF cross-dock building at 1302 Wharton Weems in La Porte. This lease brings occupancy in the building to 100%. In 2017, the company leased 493K SF at Port Crossing. MRC Global is a distributor of pipe, valve and fitting products and a service provider to the energy and industrial markets. Colliers International's Walter Menuet and Gary Mabray represented the landlord, Liberty Property Trust. Cushman & Wakefield's Scott Wegmann and Kelley Parker represented the tenant.

MaSTherCell U.S., a global medical manufacturing and biotechnology firm, leased 32K SF at 253 Medical Center Blvd. in Webster. This lease represents the company’s expansion to the U.S. — it has other locations in Brussels, Israel and Asia. CBRE's Brandy Bellow Spinks represented the landlord. Transwestern's Robby Winston represented the tenant.

Venterra Realty acquired financing for Shadowbrooke and Silverbrooke, two multifamily communities totaling 552 units at 1025 Dulles Ave. and 1020 Brand Lane in Stafford. HFF secured two 10-year, fixed-rate loans with interest-only payments throughout the term. Loan proceeds were used to refinance existing financing that HFF arranged in 2014. Completed in 2003, Shadowbrooke features 240 units that are 92% leased.  Completed in 2007, Silverbrooke has 312 units and is 93% occupied. The properties are adjoined by a private park, including shared amenities such as a jogging trail, sand volleyball court, playground and putting green. Each community houses its own resort-style swimming pool, hot tubs, clubhouses and fitness centers. HFF's Cortney Cole and John Williamson represented the borrower. 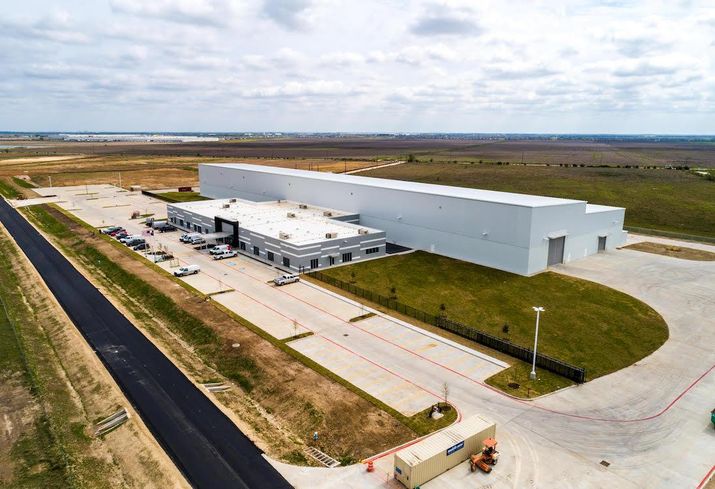 MAN Energy Solutions has opened its North American headquarters in The Uplands at Twinwood. This is the first facility to launch operations in the new 400-acre business park development at 1758 Twinwood Parkway in Brookshire. The new headquarters is a 137K SF build-to-suit owned by Houston-based Welcome Group.

Century Communities Inc. is opening a new community in Porter, north of Kingwood and 30 minutes from Downtown Houston. Northpark Woods' community amenities will include walking trails, a covered pavilion, a splash pad and a playground. Northpark Woods will have 370 single-family home sites with 12 floor plans ranging from 1,205 to 2,760 SF starting from the $160Ks.

Panattoni is developing a 643K SF cross-dock building on 41.6 acres at the Bayport South Business Park in Pasadena. The specifications are 36-foot clear height, 60-foot loading bay, 56-foot by 50-foot column spacing, dock-high and four overhead doors. Construction is expected to wrap in the fourth quarter.

Danner’s Inc. recently broke ground on 4 acres at 3551 Pasadena Blvd. This will be the company's new headquarters, relocating from east Houston after more than 80 years.

Tannos Land Holdings is building a new 63K SF office building at 505 South Friendswood Drive in Downtown Friendswood. The $10M building is four stories with retail and restaurants on the ground floor and office space on the upper floors for one or more tenants.

Virgata Commons, a new commercial center at 1765 and 1769 South Friendswood Drive near the intersection of FM 528, is under construction. Two buildings totaling 20K SF will include Orangetheory Fitness, Mod Pizza and Jersey Mike’s. Virgata Property Co. is looking for a 3K SF to 3,500 SF restaurant. Three of the four pad sites are leased to Chick-fil-A, Chipotle and Valvoline. The fourth at 3.7 acres is available.

West Parkwood Place is under construction at 1501 West Parkwood Ave., Friendswood. The $4.75M commercial center will be complete and ready for build-out in August.

A new retail center is underway at Fairmont Parkway and Allen Genoa in Pasadena. The developer is looking for an anchor tenant in the range of 20K to 25K SF. Pad sites and smaller inline spaces are available.

Holiday Inn Express is planned for the intersection of League City Parkway and the Gulf Freeway. Three acres were sold to the hotel from a 19-acre parcel. Plans were recently announced for the remaining 16 acres to be developed as a part of the proposed Epicenter League City project. Brockway Commercial's James Brockway represented the seller, RIG Member LLC.

Staybridge Suites will be built in La Porte at 1328 Highway 146 South.

Marriott Fairfield Inn & Suites will open this summer at 1144 Pinnacle Drive in League City. The hotel will feature five floors and 112 rooms.

The new owners of Macroplaza Mall, formerly Pasadena Town Square, will begin work on an extensive renovation to the mall. Redevelopment includes additional entertainment, restaurants and medical space. The facade will take on a colonial-style similar to that of the El Bolillo bakery that was recently built nearby.

A new rotating art installation is coming to Understory, the 35K SF community hub and culinary market at the Bank of America Tower in Downtown Houston. The new collaboration is in partnership with Houston's Sawyer Yards, a creative community in Houston. Curated by Grace Zuñiga, Sawyer Yards' creative director, the inaugural installation titled Natural Abstraction will feature eight women and include paintings, ceramics and a mural. The pieces will explore the human connection to natural environments and aim to deepen one’s understanding of home. The installation will be on display from June 1 through Dec. 30. Every six months, the 100-foot glass wall lining Milam Street, known as the Milam Art Wall, will feature work from Sawyer Yards artists. Curated themes will vary with each installation.