A new over-55 multifamily project has opened in Katy. 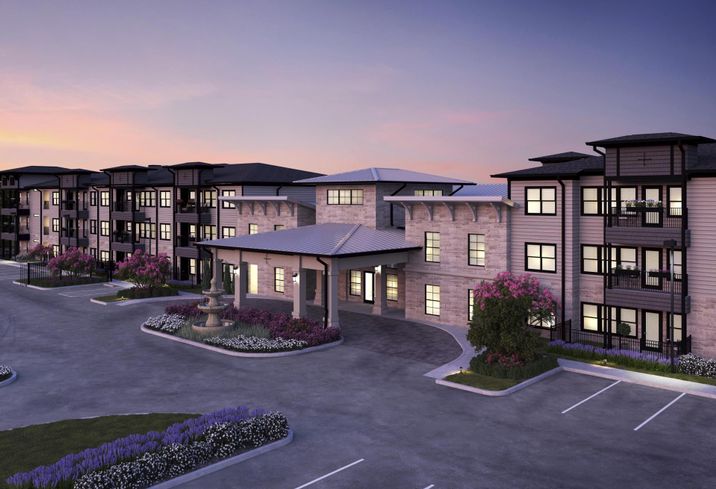 Soléa Cinco Ranch, a 150-unit luxury community at 25500 Westheimer Parkway, is focused on offering an active lifestyle for residents. It has a full-time activities director to coordinate daily activities including happy hours, group outings, wine tastings, cooking classes, book clubs and fitness classes. More than 26% of Katy’s population is 55 or older, according to the project’s developer and owner, Sparrow Partners. Apartments at Soléa Cinco Ranch range from $1,110 to $2,390 a month. Sparrow Living manages the property. This is the second 55+ active adult community built by Sparrow Capital Partners in the Houston metro; the first was the 129-unit Soléa Copperfield in Northwest Houston. The company has three similar communities open in Austin, San Antonio and Houston, and has 16 more under development in Texas, Oklahoma, North Carolina and Arizona. 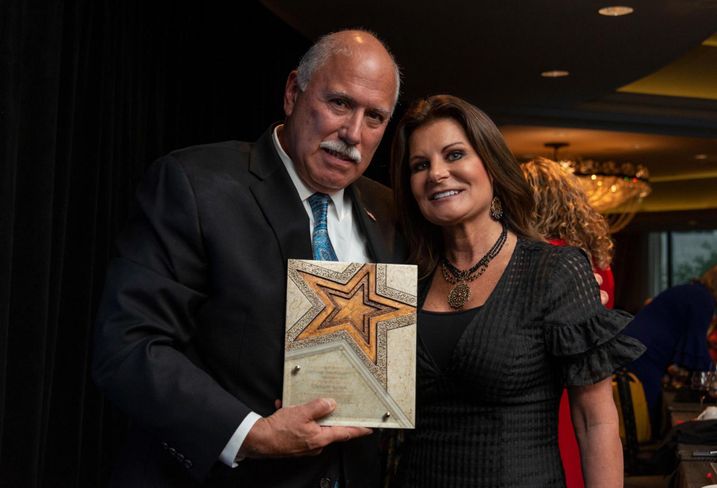 Courtesy of The Houston Apartment Association
Cesar Lima being inducted into the HAA Hall of Fame.

AAA Plumbers co-owner Cesar Lima was inducted into The Houston Apartment Association Hall of Fame. He has worked in the multifamily industry for more than 40 years, sits on HAA’s board and was involved in the development of HAA’s headquarters and education center. The Hall of Fame award is the highest honor an owner member can receive, and Lima is the 30th HAA member and only fifth supplier to receive the award since its inception in 1984.

Howard Caldwell was named Texas director of construction services at WSP USA. He is a 35-year industry veteran and a former area engineer with the Texas Department of Transportation. He was involved in delivering Texas’ first cable stayed bridge, the nation’s first all-electronic toll road and the state’s first design-build highway construction contracts.

Martin Gollwitzer joined Perkins and Will’s Houston office as director of operations. He has more than 15 years of experience in architecture and interior design, particularly in mission critical, education and science facilities. 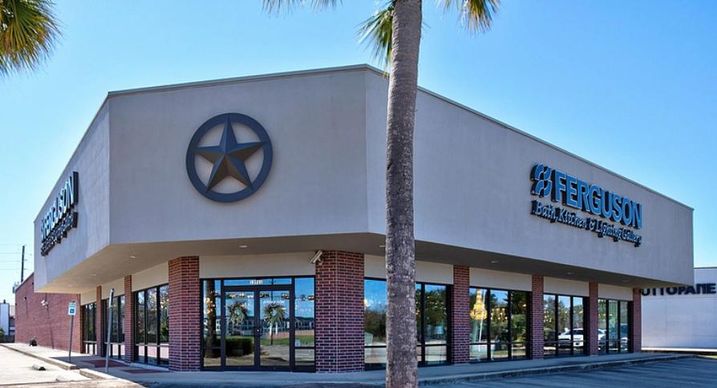 An undisclosed buyer purchased Oversized Storage, a 61,520 SF self-storage facility in Willis. Marcus & Millichap’s Dave Knobler marketed the property for the seller, an undisclosed private investor. The property is on 5.75 acres at 11741 FM 830 and includes expansion land.

“The property will probably primarily remain a storage facility for a while, but having about 830 feet of frontage on FM 830 in between the new Woodlands Hills development and Lake Conroe adds a potential redevelopment twist,” Knobler said in a press release.

Fogelman Properties, in a joint venture with DRA Advisors, acquired Retreat at Steeplechase, a 390-unit apartment community in Northwest Houston. The property was built in 1998 with a mix of one-, two- and three-bedroom units and is 94% occupied. Fogelman will manage the property and implement some renovations, including updates to the interiors, exteriors, clubhouse and pool area. This is the third acquisition for the Fogelman-DRA JV. Fogelman now owns more than 1,300 units in Houston and has purchased more than 2,000 units totaling more than $267M across the U.S. in 2019. 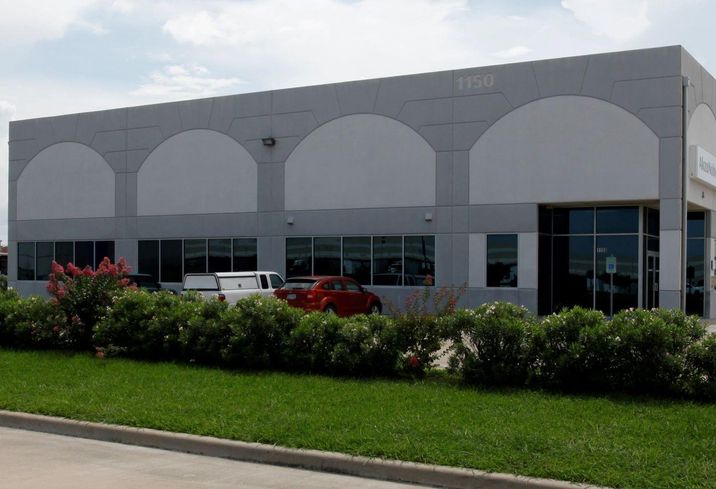 The owners of Uptown Sushi, which was just overhauled, are opening a 3,738 SF Sushi Rebel in CityPlace. The location will be in the ground-floor retail space at 1700 Lake Plaza Drive in Springwoods Village. Chodrow Realty Advisors’ Alan Chodrow and Shane Karstendiek represented the tenant, Peggy and Daniel Chang. Transwestern’s Nick Hernandez and Crystal Allen and Patrinely Group’s Dennis Tarro represented the landlord, a JV of Patrinely Group, USAA Real Estate and CDC Houston. 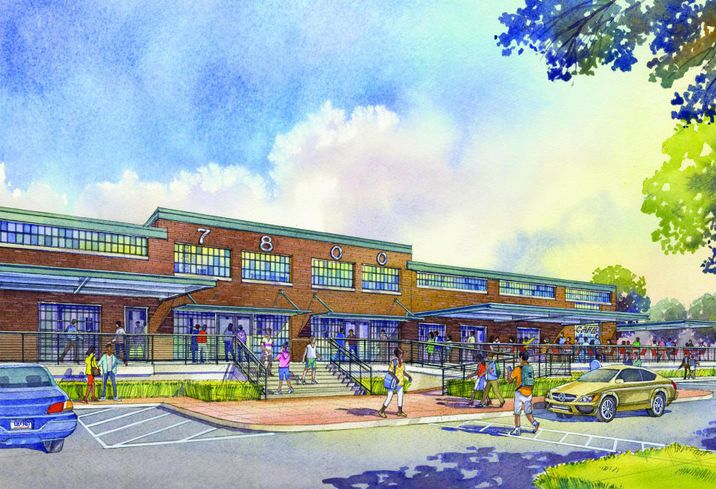 Courtesy of Ladco Design Center
Renderings of The Shops at Ladco, 7800 Washington

The Shops at Ladco has opened at 7800 Washington in the Upper Washington Corridor’s Design District. The property was a 1950s-era distribution center and now has 66K SF of showrooms and commercial space. The project was envisioned as an expansion of the Ladco Design Center, and a bridge was constructed to connect The Shops at Ladco to the design center at 7900 Washington. Together, the two properties offer 100K SF of interior design products.

HCSS broke ground on a two-story, 56K SF building and 280-car parking structure at its Sugar Land campus. This will be the third office building on the construction software developer’s 12-acre headquarters campus. The office building will include a workout room and indoor racquetball court, plus a full kitchen, multiple lounge areas and an entertainment room. Studio RED Architects designed the building, which is being constructed by Rosenberger Construction. Site work was done by MSC Earthworks.

HCSS intends to eventually grow its campus to five buildings.

Air 59 Logistics Center is now shell complete and ready for tenant improvements. JLL’s Mark Nicholas, Richard Quarles and Joe Berwick are leasing the 685K SF distribution building at the intersection of Will Clayton Parkway and U.S. Highway 59 in Humble. The owners at Archway Properties and Ridgeline Property Group. Archway’s 111-acre Park Air 59 mixed-use development is home to over 1M SF of industrial, medical and retail space and has 20 acres of pad sites remaining. 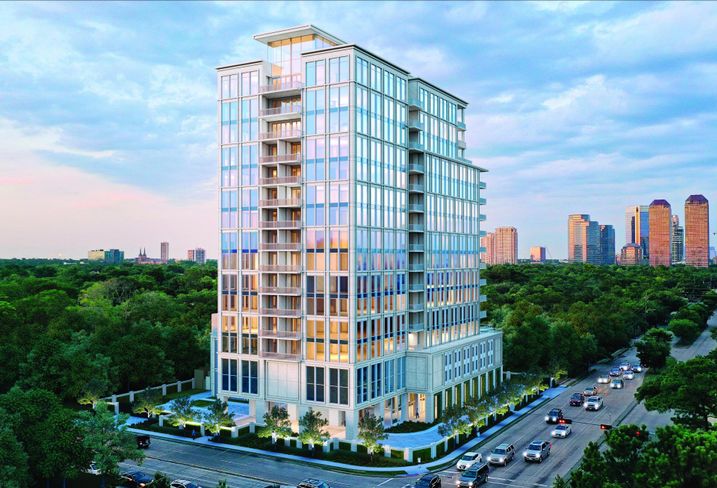 Courtesy of Pelican Builders
Rendering of The Hawthorne

Pelican Builders has opened a sales center for The Hawthorne, a 17-story condo building it is constructing at 5656 San Felipe. Ludlow & Associates Construction will break ground on The Hawthorne in Q1. According to Pelican Builders, there are fewer than 25 new vertical condo projects available in Houston, and this is one of only a few new ones announced this year. The tower’s 67 units will start at $1.1M and average 2,705 SF. Amenities will include large terraces with pet porch potties and a 67-foot lap pool. Kirksey handled design.

Data Foundry is building a 27K SF data hall with 4 megawatts of capacity in addition to its 350K SF master-planned Houston 2 data center campus in Greenspoint. It is expected to deliver in Q4.

Greystone provided $27M in bridge financing to Iliad Realty Group for the acquisition of Villa Nueva Apartments in Houston. Greystone’s Daniel Wolins originated the financing, and Estreich & Co.’s Sal Torre brokered it. Villa Nueva Apartments was built in 1980 and has 542 one- and two-bedroom units across a 47-building campus. The bridge loan has a two-year term with two six-month extension options so the borrower can acquire and rehabilitate the property while Greystone works to secure a permanent loan.

Brookdale Senior Living is adding on-site dialysis treatment options at four of its continuing care retirement communities in Texas. It is partnering with Dialyze Direct. Brookdale Willowbrook Place in Houston opened its dialysis center Sept. 25; Brookdale Galleria in Houston will open its facility in May. The other two facilities are in San Antonio and Austin.

Texas Tower, the 47-story, 1M SF office tower under construction, was designated Wired Certified Platinum. It is the first ground-up development in Houston to receive the Platinum level. WiredScore rates the internet and mobile connectivity of buildings. Hines and Ivanhoé Cambridge are developing Texas Tower, which is being designed by Pelli Clarke Pelli. The building has already been named LEED Platinum and met the WELL v2 Building Standards. It is 33% leased and scheduled to open in late 2021.

CORRECTION, SEPT. 30, 5 P.M. CT: An earlier version of this story had the incorrect company for Reed Vestal and Taylor Schmidt. It has been updated.