CJ Development has acquired land in an opportunity zone in Richmond, Texas, to develop into a commercial shopping center that will market to retail, restaurant, medical, fitness and other business enterprises. 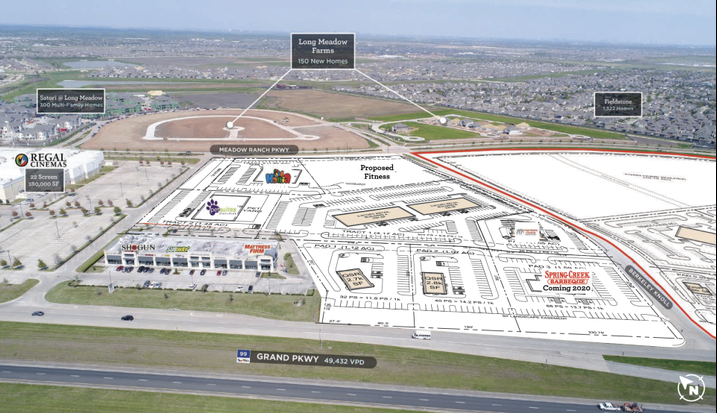 Courtesy of JLL
A rendering of Grand Center at Long Meadow Farms in Richmond, Texas

The developer purchased 42.7 acres at Grand Parkway Highway 99 and West Bellfort Street in Richmond. That acreage will be combined with an already-purchased 15 adjacent acres.

The new development will be named Grand Center at Long Meadow Farms and will comprise a full 58 acres, featuring a 46K SF, two-story retail center, which the company will offer for lease. The company will also sell other tracts to users who wish to own their property and construct their own building.

The developer will install roads and off-site detention, as well as fully looped utilities in coordination with the municipal utility district.

Richmond is a small railroad town with a population of about 12,000, and is located roughly 30 miles southwest of Houston.

Two areas within Richmond’s borders were selected as opportunity zones in 2018: the historic Downtown district, and a large tract near the Grand Parkway. While the former area is focused on preservation, the latter presents a strong opportunity for new construction.

The Grand Center at Long Meadow Farms development will be located within the second opportunity zone, which is bounded by Highway 90, the Grand Parkway and Harlem Road.

There is more commercial development activity underway in that opportunity zone than Downtown Richmond. Two of the fastest-growing master-planned communities in the Houston region are in Richmond: Johnson Development's Veranda and Harvest Green communities, which will total more than 5,000 homes at full build-out.

Opportunity zones are designed to spur economic development. The challenge for Richmond is its small population base, which has traditionally limited developer interest in the area.